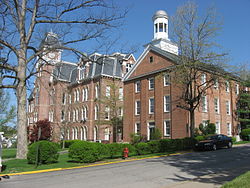 Hanna and Miller Halls, two of the university's oldest buildings

Waynesburg University is a private university located in Waynesburg, Pennsylvania. The university offers graduate and undergraduate programs in more than 70 academic concentrations, and enrolls over 2,500 students, including approximately 1,500 undergraduates.

Waynesburg University was founded in 1849 by the Cumberland Presbyterian Church, and is a member of the Council for Christian Colleges and Universities. Waynesburg University is located on a contemporary campus in the hills of southwestern Pennsylvania, with three adult centers located in the Pittsburgh regions of Southpointe, North Hills and Monroeville.

Hanna Hall and Miller Hall are listed on the National Register of Historic Places.[1]

Waynesburg University is built around 4 spacious parks owned by the town of Waynesburg. The westernmost park contains a bridge meandering through the trees; the next park features a gazebo; and the 2 parks nearest the University center are commonly referred to as the Fountain Park and the Statue Park. Fountain Park is directly in front of Hannah and Miller Hall, while Statue Park is between Buhl Hall, Stewart Hall, Pollock Hall, and Martin Hall. Statue park features a statue dedicated to the lives lost in the Civil War. The combined area of the parks is approximately 15 acres.

Built in February 2010, the fitness center is 2 stories. The first floor houses weight lifting and locker rooms. The second floor features cardio workouts. Both floors have flat screen TVs and the cardio machines come equipped with built in radio tuners.

Waynesburg University is home to ten campus residence halls, seven women and three men's halls. Martin and Thayer Hall are home to most of the men on campus. They both are double occupancy halls on the Eastern side of campus. Martin Hall is closer to downtown Waynesburg while Thayer Hall is located next to Buhl Hall and the Eberly Library. Willison is the third men's hall, apartment style, it is mostly a double occupancy hall but students have the option to triple. Willison is six stories tall and is the newest building on campus. It is on Franklin street and is adjacent to the armory.

Denny Hall is attached to the Benedum dining hall on the West side of campus, like Thayer it has built in desks and cabinets in the wall. It is one of three underclassmen women's halls. Across the parking lot overlooking the chapel is Burns hall and on the other side of the chapel is the single story Ray Hall.

The four upperclass women halls are West, South, East, and Pollock. West, South, and East sit above the Stover campus center and the Eberly Library in a small plaza. Pollock is located right between Buhl Hall, one of the classroom buildings, and Thayer Hall.

Of all the halls only South, West, East, Pollock, and Willison have air conditioning. They are all the same floor layout with two sleeping areas, a bathroom with a shower, and a living area with a provided futon. South, West, and East also have bay windows.

The Yellow Jacket is a member of the Pennsylvania NewsMedia Association and is affiliated with the Waynesburg University student chapter of the Society of Professional Journalists.
The staff of the Yellow Jacket has been recognized numerous times by the Pennsylvania NewsMedia Association's Keystone Awards and the Society of Professional Journalists regional Mark of Excellence Awards.[2]

WCYJ is a radio station located on the third floor of Buhl. It is run by students and the Waynesburg communications staff. The current student general manager is Kyle Dawson. The faculty adviser is local WANB's jock Doug Wilson. The station plays Adult Contemporary Top-40 hits from the studio at the entry to Buhl, and broadcasts out from the tower located on top of Buhl. The station broadcasts specialty shows, Waynesburg University sports, and even local high school football games.

The station's frequency, 99.5 FM, can be heard within the limits of the Waynesburg borough. You can also listen to "The Hive" online at bit.ly/wcyjfmlisten. Until 2011 the station was called 88.7 "The Buzz".

Every October the station hosts their largest event, Pumpkin Bowling, in Johnson Commons. Their relay for life event, the 24-hour broadcast, has been steadily growing. Radio staff stays in the radio station for 24 straight hours.

Waynesburg Community Television is operated by students at Waynesburg University and the general manager is Anthony Conn. The station is available via the Waynesburg Comcast cable system on channel 14 and online at wctv.waynesburg.edu. The studio is located on the 4th floor of Buhl Hall. WCTV broadcasts a variety of student and community oriented programming such as Jacket Sports Weekly, The Buzz, Live at 5 Newscast, Plead Your Case, The Journey and The Waynesburg Effect.

Through the Center for Service Leadership, students are connected with organizations according to their field of study. The college community commits over 38,000 hours of service each year to over 50 agencies and community projects. On average, University students perform 1,400 hours of community service a week, both domestically and internationally.[citation needed]

The University is a member of the Council for Christian Colleges and Universities (CCCU) and is one of 27 Bonner Scholar schools in the country, offering local, regional and international opportunities to touch the lives of others through service.

The Graduate School of Professional Studies program offers degrees in business, nursing, education, and counseling in three Pittsburgh locations as well as in Waynesburg. The Master of Business Administration program is the third largest in the Pittsburgh region.[citation needed] Waynesburg University also offers a Doctoral Program of Nursing Practice.

In 1939, Waynesburg University's football team played in the first televised football game against Fordham University, losing by a score of 34 to 7.[3] In 1966 under head coach Carl DePasqua, The Yellow Jackets football team won the NAIA Football National Championship game in Tulsa, Oklahoma. The Yellow Jackets are also 2–0 against Penn State. They played the Nittany Lions in 1931 and 1932, beating them 7–0 and 7–6, respectively.