In the 2000 census, the town had a total population of 9,232 with an estimate (by the town government) of 10,000 as of early 2007 and 9,869 at the 2010 census and 9,789 in 2012. Waynesville is located just outside the Pisgah National Forest and is close to the Great Smoky Mountains National Park and the Blue Ridge Parkway. Waynesville and Haywood County are part of the four-county Asheville Metropolitan Statistical Area, currently the 5th largest metropolitan area in North Carolina. It is the third largest town in the MSA behind the cities of Asheville and Hendersonville.

According to the United States Census Bureau, the town has a total area of 7.8 square miles (20 km2), all of it land.

As of late 2006 the town of Waynesville government estimated the population at 10,000.

The Town of Waynesville was founded in 1810 by Colonel Robert Love, an American Revolutionary War soldier. He donated land for the courthouse, jail, and public square, and named the town after his former commander in the war, General "Mad" Anthony Wayne.

The "Battle" of Waynesville Waynesville also has a connection to another war, as it was the scene of the last and perhaps most unusual skirmish in the eastern theater of the American Civil War. On May 6, 1865, Union Colonel William C. Bartlett's 2nd North Carolina (Federal) Mounted Infantry were raiding, pillaging, burning homes and engaging in other activities to undermine the economic base of the area and were attacked at White Sulphur Springs (east of Waynesville) by a detachment of rebels from the Thomas Legion of Highlanders, who had been summoned for help by locals.

East of the Mississippi, Thomas' Legion fired "The Last Shot" of the Civil War in White Sulphur Springs, North Carolina. The Legion consisted of both Cherokee and White soldiers. Some of these soldiers had served under Jubal A. Early during the Shenandoah Valley Campaigns of 1864, but had been sent back to their native North Carolina mountains to engage in guerrilla warfare against the remaining Union forces.

The disoriented Union soldiers retreated into Waynesville, and on the evening of May 6 remaining elements of the Thomas Legion surrounded the town. The soldiers lit numerous bonfires on the ridges above the town and engaged in war chants in an effort to intimidate the Federals. The following day the Confederate commanders Gen. James Green Martin and Col. William Holland Thomas (for whom the Legion was named) negotiated a surrender. These commanders had been made aware that Generals Robert E. Lee and Joseph E. Johnston had already capitulated and that continued hostilities would prove pointless.

The Town of Waynesville was incorporated in 1871. In July 1995, the towns of Hazelwood and Waynesville merged into one community and continued to grow with a population today of almost 10,000. 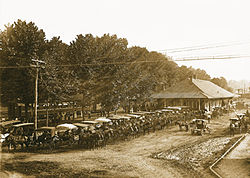 Waynesville began to see development after arrival of the railroad in 1884. The agricultural, lumber and tourism industries in Waynesville and Haywood County began to thrive as access to the west was opened up.

The area of Waynesville located along Richland Creek, northwest and down hill from Main Street, was where the railroad tracks were laid. Until this time the area had been essentially a swampland, with a few scattered buildings but no major development. Once the depot was built and the train arrived this section was developed. It was given the name of Frog Level. Frog Level was so named by the local community because of its low-lying location along Richland Creek, the "frog level" when the area flooded.

Downtown and the nearby Frog Level commercial centers of Waynesville continued to be the central focus for social life, transportation, and wholesale and retail businesses through the 1940s. Businesses in the Frog Level area in the 1930s and 1940s included hardware stores, farm supplies, coal sales, auto dealers and garages, furniture stores, wholesale groceries, warehouses and lumber companies, all businesses dependent on the railroad.

As the automobile became the primary mode of transportation for most residents, the railroad declined in importance. This in turn led to a shift of business away from Frog Level. The last passenger train arrived in Waynesville in 1949, and freight trains pass through Frog Level twice daily, with most trains continuing on to Sylva.

By the 1980s the railroad in Waynesville had been integrated into the Southern Railway Company system. The first depot burned in 1900, but it was soon replaced with another depot that remained standing until 1987. 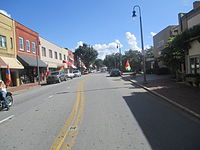 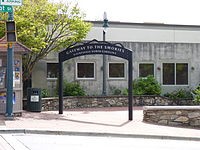 Waynesville calls itself the "Gateway to the Smokies".

Waynesville is serviced by two or more freight trains daily via the Norfolk Southern Railway and is connected to Interstate 40 and the rest of Southwestern North Carolina via the Great Smoky Mountains Expressway giving it easy access to Knoxville, Tennessee and Asheville. There is no airport in Haywood County mostly due to its close proximity to the Asheville Regional Airport and Knoxville's McGhee Tyson Airport. Asheville is about a 30-minute drive east, Knoxville is an hour and a half to the west. It is served by the Great Smoky Mountain Expressway which is a 4 lane divided highway between Sylva and Exit 98 near West Waynesville. Then it is a 4 lane freeway to Interstate 40 near Canton. It has exits for Hazelwood, West Waynesville and Russ Avenue through the town.

Waynesville’s watershed is located southwest of the town and covers an area of 8,400 acres (34 km2) of town-owned land on the headwaters of Allens Creek making it much larger than the town itself (7.9 square miles.) Tributary streams within the watershed flow into the Waynesville Reservoir, a 50-acre (200,000 m2) man-made lake created by a dam on Allens Creek. The reservoir and surrounding watershed are classified by the State of North Carolina as WS-1. This classification is the state’s most stringent and forbids development within the watershed boundary.

Cold Mountain, located 15 miles (24 km) southeast of Waynesville within the Pisgah National Forest, was made famous by the novel Cold Mountain by Charles Frazier. A major motion picture based on the novel was produced by Miramax Films in 2003.

Some scenes of the 1996 movie My Fellow Americans were filmed in Western North Carolina. The scene where Jack Lemmon and James Garner are chased from a fast food restaurant parking lot in a car and a giant clown sign crashes through their windshield was filmed at the former Long John Silver's, now a CelluarSales.com Verizon wireless franchise location, on Russ Avenue in Waynesville.

Over the Summer a B movie filmed in the late 1980s, was produced by Haywood County native Buffy Queen and shot entirely in Frog Level.