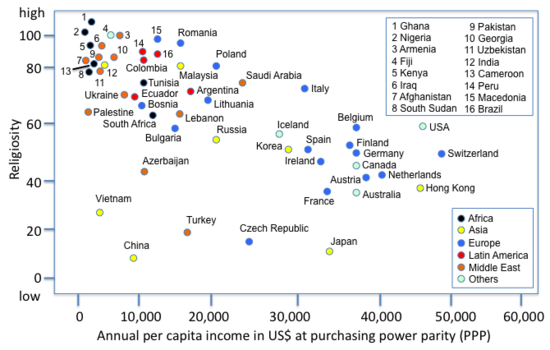 The average annual income of countries correlates negatively with national levels of religiosity.[1]

The correlation of wealth and religion has been subject to academic research. Wealth is the status of being the beneficiary or proprietor of a large accumulation of capital and economic power. Religion is a cultural system that often involves belief in supernatural forces and may intend to provide a moral system or a meaning of life.

The GDP of countries generally correlates negatively with their religiosity, i.e. the wealthier a population is the less religious it is.[2]

According to a study from 2015, Christians hold the largest amount of wealth (55% of the total world wealth), followed by Muslims (5.8%), Hindus (3.3%) and Jewish (1.1%). According to the same study it was found that adherents under the classification Irreligion or other religions hold about 34.8% of the total global wealth.[3] 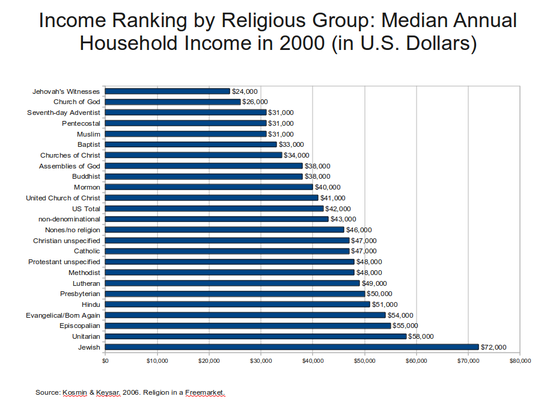 A chart illustrating income by religious grouping in the U.S. in 2001.

A study in the United States, published in the Social Forces journal and conducted by sociology researcher Lisa A. Keister, found that adherents of Judaism and Episcopalianism[4] attained the most wealth, believers of Catholicism and mainline Protestants were in the middle, while conservative Protestants accumulated the least wealth, while in general people who attend religious services achieved more wealth than those who do not (taking into account variations of education and other factors).[5] The researcher suggests that wealth accumulation is shaped by family processes.[6]

In the United States, 48% of Hindus have a household income of $100,000 or more, and 70% make at least $75,000, which is the highest among all religions in United States.[7] The median net worth of people believing in Judaism is calculated at 150,890 USD, while the median net worth of conservative Protestants (including Baptists, Jehovah's Witnesses, Seventh-day Adventists, Christian Scientists) was found at 26,200 USD. The overall median in the dataset was 48,200 USD.[5]

A study done by the nonpartisan wealth research firm New World Wealth found that 56.2% of the 13.1 million millionaires in the world, were Chrisitans.[8] While 6.5% were Muslims, and 3.9% were Hindu and 1.7% were Jewish. In the other hand the study found that 31.7% of millionaires were adherence to "Other religions" and Irreligion.

A study published in the American Journal of Sociology by Lisa Keister, found that "religion affects wealth indirectly through educational attainment, fertility, and female labor force participation" but also found some evidence of direct effects of religion on wealth attainment.[9] Keister notes that certain religious beliefs ("one should have many children", "women should not work") lower wealth accumulation, both on the micro- and macro-scale.[9][10]