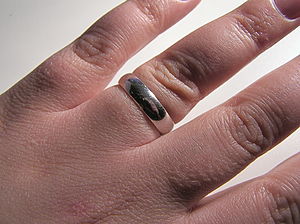 A wedding ring or wedding band is a ring, often but not always made of metal, indicating the wearer is married. Depending on the local culture, the ring is usually worn on the base of the right or the left ring finger. The custom of wearing such a ring has spread widely beyond its origin in Europe.[1] In the United States, wedding rings were originally worn only by wives, but during the 20th century they became customary for both husbands and wives.[2] Wedding rings are a tradition that goes back many centuries, having been manifested in the wedding customs of many different nations and religious groups. They come in many forms, most traditionally a ring made of gold or some other precious metal.[3] Many people wear their wedding rings day and night, causing an indentation in the skin that remains visible even when the ring is taken off. Another indication of their cultural importance is that wedding rings are among the few items permitted to be worn by otherwise restrictive rules for prison inmates and visitors.[4][5]

It is widely believed that the first examples of wedding rings were found in ancient Egypt. Relics dating back as far as 3,000 years ago, including papyrus scrolls, show us evidence of braided rings of hemp or reeds being exchanged among a wedded couple. Egypt viewed the circle as a symbol of eternity, and the ring served to signify the never-ending love between the couple. This was also the origin of the practice of wearing the wedding ring on the ring finger of the left hand, which the Egyptians believed to house a special vein that was connected directly to the heart,[6] otherwise also known as Vena amoris.

During the 1500s and 1600s, European husbands would bestow a gimmel ring upon their wives. Similar to the puzzle ring, they consisted of two interlocking bands. The bride and groom would each wear one of these bands after their engagement, and the two bands would be reunited at the wedding ceremony. The wife would then wear the combined ring.[6]

This was a style of ring that was popular during the Renaissance. It came in the form of a band of sterling silver, inscribed with a poem or similar expression of love.[6]

There are many other historical ring styles throughout different cultures. For example, see the picture below of the Byzantine era ring depicting Christ. Also there are puzzle rings representing an old custom from the Middle East. This ring was made up of several pieces that would join together in a cohesive band when worn correctly. The object of this ring was to be very difficult to put on properly so that, if the wife took off her wedding ring, her husband would know.

In 1942 British wartime restrictions on the manufacture of jewellery resulted in "utility" wedding rings which were limited to a mass of no more than two pennyweights and were made from 9-carat gold rather than the traditional 22.[7]

The double-ring ceremony, or use of wedding rings for both partners, is a 20th-century American innovation, but has been used elsewhere before. The US jewelry industry started a marketing campaign aimed at encouraging this practice in the late 19th century.[2] In the 1920s, ad campaigns tried introducing a male engagement ring, but it failed due to the necessity that its advertising campaigns make secret appeals to women.[2] Marketing lessons of the 1920s, changing economic times, and the workplace impact of World War II led to a more successful marketing campaign for male and female wedding bands, and by the late 1940s, double-ring ceremonies made up 80% of all weddings, as opposed to 15% before the Great Depression. Rising expectations of equality between the sexes in nearly all spheres of life during the 20th century cemented the trend and double-ring ceremonies remain preponderant in the US in the 21st century, causing some orthodox religious authorities to struggle to harmonize their single-ring traditions with couples' desire for a double-ring ceremony.[8] Most recently, double-ring ceremonies have been adopted by same sex couples.[9]

In Western countries, wedding rings are often made of rose, white or yellow gold, platinum or palladium. The perpetuity of noble metals is thought to symbolize the steadfastness of the marriage bond. Common engravings on the inside of the ring include the name of one's spouse, or of both spouses, and/or date of the wedding, and possibly a phrase of special meaning.[10] In many countries the engagement rings are plain while the bride's wedding ring typically has jewels.

According to some customs, the ring forms the last in a series of gifts, which also may include the engagement ring, traditionally given as a betrothal present. This custom was practised in Ancient Rome and is possibly much older.[11] In modern egalitarian societies both parties often contribute to the purchase of engagement and wedding rings, choosing them together, as a modern woman is ever less of a dependent subject of the father to be handed over to dependency on a husband. In some countries the wedding ring is traditionally a gift from someone else to help a young couple.[citation needed]

In several traditions, the best man or maid of honour has the duty of keeping track of a couple's wedding rings and to produce them at the symbolic moment of the giving and receiving of the rings during the traditional marriage ceremony. In more elaborate weddings, a ring bearer (who is often part of the family of the bride or groom) may assist in the ceremonial parading of the rings into the ceremony, sometimes on a special cushion.

Among Eastern Orthodox and Eastern Catholic Christians, the exchange of rings is not technically part of the wedding service, but rather are exchanged at the betrothal. It is always a two-ring set given to her by the priest or by the best man.[11] The orthodox Christian Church of Greece has recently stopped performing betrothal blessings separately, as these were often non-committing, and now a betrothal ceremony is the initial part of the wedding service. In many families an informal blessing is now performed by the betrothed ones' parents in a family dinner that formalizes the betrothal. The ceremony of betrothal is now possibly performed immediately before the wedding (or "crowning" as it is more properly called), and the actual symbolic act of marriage is not the exchange of rings, but the crowning.

Historically, the wedding ring was connected to the exchange of valuables at the moment of the wedding rather than a symbol of eternal love and devotion, a sign of "earnest money". According to the 1549 edition of the Book of Common Prayer: after the words 'with this ring I thee wed' follow the words 'This gold and silver I give thee', at which point the groom was supposed to hand a leather purse filled with gold and silver coins to the bride.[12] It is a relic of the times when marriage was a contract between families, not individual lovers. Both families were then eager to ensure the economic safety of the young couple. Sometimes it went as far as being a conditional exchange as this old (and today outdated) German formula shows: 'I give you this ring as a sign of the marriage which has been promised between us, provided your father gives with you a marriage portion of 1000 Reichsthalers'.[12] 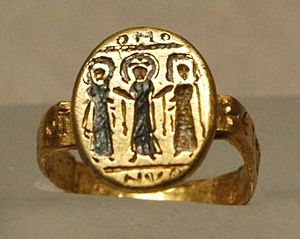 After marriage, the ring is worn on the hand it had been placed on during the ceremony. By wearing rings on the fourth finger, a married couple symbolically declares their eternal love for each other. This has become a matter of tradition and etiquette. Many people wear their wedding rings day and night. When needed because of hygiene or to avoid damage, it is common to wear the rings on a necklace instead.

Some cultures exchange additional rings: In some parts of India, Hindus may use a toe ring or bichiya which is worn instead of a ring on a finger; although this is only for women, and increasingly worn along with a finger ring. In the eastern parts of India, primarily West Bengal, an iron bangle, or 'loha,' is worn by women. Increasingly, this bangle is given a gold or silver coating to improve its appearance. In Romania, spouses celebrate their silver wedding anniversary (25 years of marriage) by exchanging silver wedding rings, which are worn on the fourth finger of the left hand along with the original (usually gold) wedding ring.[13][14]