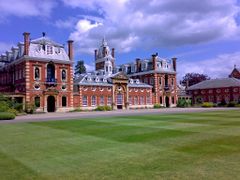 View of the main College buildings and South Front.

Wellington College is a British co-educational boarding and day independent school in the village of Crowthorne, Berkshire. Wellington is a registered charity (#309093)[1] and currently has about 1,050 pupils aged between 13 and 18.[2] It was built as a national monument to the first Duke of Wellington (1769–1852), after whom the College is named.[3] Her Majesty Queen Victoria laid the foundation stone in 1856 and inaugurated the School's public opening on 29 January 1859.

Many former Wellington pupils fought in the trenches straight after leaving school during the First World War, volunteering for military action, a conflict in which 725 of them lost their lives.[4] A further 501 former pupils were killed in action in the Second World War.[5]

The school is a member of the Rugby Group, which includes Harrow School and Charterhouse School, and is also a member of the G20 Schools group. The Good Schools Guide calls the school "a serious player in the field of education".[6]

Wellington College was granted its royal charter in 1853 as the Royal and Religious Foundation of The Wellington College, and was opened in 1859. Its first Master[Note 1] was Edward White Benson, later Archbishop of Canterbury. The college's Visitor is HM The Queen.[7]

By the 1950s and 1960s, the school was considering becoming co-educational, but the lack of financial resources prevented it from doing so. The first girls were admitted into the Sixth Form in the 1970s and the school became fully co-educational in 2005.

Wellington has sponsored the founding of a new independent state school in Wiltshire, The Wellington Academy,[9] which opened in 2009.

The college was designed by John Shaw Jr., who had also previously worked as an architect for Eton College. For its time, the design of the College was unusual compared to the popular form, but Prince Albert who helped choose the architect was more interested in Shaw's classical approach, having already seen the architect's design for the old Royal Naval School in New Cross, London.[10] The main buildings were designed in a style loosely termed "French Grand Rococo",[11] and the chapel was designed by George Gilbert Scott.[citation needed] There have been many modern buildings, the best of which follow Shaw's style while still being modern: for example, the new Nicholson modern foreign-languages building.

Wellington College stands on a 400-acre (160 ha) estate in South-East England, near Reading, Berkshire. The grounds of the college include a golf course and woodland in addition to playing fields. The grounds contain many unusual ant and spider species, and were frequented by the entomologist Horace Donisthorpe, who collected extensively there.[citation needed] The grounds also contain an SSSI.

Wellington College was one of the 21 founding members of the Rugby Football Union, and pupils at the school have played rugby union. In 2008, the College became the first school to win the Daily Mail Cup at both U15 and U18 level in the same year, beating Millfield School and St Benedict's School, Ealing in their respective finals at Twickenham on 2 April 2008.[13][14] Wellington have a national reputation for Rugby. In 2014/15 Wellington College 1st XV won the Rugby World School Team of the Year award, in addition to the National Rugby Awards Team of the Year Prize. They also won the National Daily Mail Trophy title, as well as the Rosslyn Park National Schools 7s Open.[citation needed] A number of Old Wellingtonians play professional rugby union, including: James Haskell (England), Paul Doran-Jones (England), Max Lahiff (Bath), Sam Edgerly and Christian Lewis-Pratt (both England 7s), Max Evans and Thom Evans (Scotland) Brett Herron (Bath), Sam Aspland-Robinson (Harlequins), Seb Adeniran-Olule (Harlequins) Conor Dolan (Wasps). The school has one of only around 20 racquets courts in the UK,[15] and until recently three Eton Fives courts, now a café bar as part of the sports club.[16] Wellington College has been named as number one golf college in the UK on a few occasions with wins in 2009 at St Andrews and 2012 at Carnoustie in the Independent Schools Golf Association (ISGA) National Finals.

First published in 1859, the same year as the College’s Foundation, The Wellingtonian has provided coverage of the current affairs of Wellington College and the wider world for over 150 years.

Student writers contribute to the magazine; student designers design the magazine; and student Editors compile the magazine. In recent years, The Wellingtonian has featured interviews with famous alumni of the College, including Sebastian Faulks and Will Young.

In October 2011, Wellington College students founded WTV, an online television channel.[18] The channel is operated entirely by students and puts out student-related episode-based content every few weeks as well as one-off short films. WTV created a James Bond parody featuring Headmaster Anthony Seldon[19] which was featured in the February edition of Private Eye. In the past, WTV has interviewed Ben Goldacre, Alexander Armstrong, AC Grayling and Tim Smit at the 2012 Sunday Times Festival of Education.[20] During the Round Square International Conference,[21] WTV interviewed former King Constantine II of Greece, Karen Darke, Colin Jackson and Jasmine Whitbread.[22] In 2014, it interviewed Simon Singh and Will Poulter, as well Katie Hopkins.

The Wellington College Combined Cadet Force, or CCF, has existed in its various forms since 1880.[citation needed] Commissioned members of the teaching staff who serve as CCF officers are attached to The Duke of Wellington's Regiment.[citation needed] The college also traditionally has two teams of field gun runners, and two runs are made annually at the college speech day.[23] In 2012 field gun teams from the College took part in the British Military Tournament at Earl's Court, including female runners for the first time at the event.[24] The Wellington College CCF is split into seven categories. These are Army, Royal Navy, Royal Air Force, Royal Marines, Cavalry, Drum Corps and Marching Band.

The school has been the subject of reports on bullying.[25] In April 2006, the college attracted widespread publicity when it became the first school in the UK to introduce 'happiness lessons' to the curriculum,[26] in conjunction with a team at Cambridge University.

In 2003 Paul Doran-Jones, James Haskell and a female student were suspended from Wellington College after a camera was set up to secretly record Doran-Jones and his girlfriend having sex in a boys' dormitory, breaking the no-sex rule.[27]

In 2005 the school was one of fifty of the country's leading independent schools found guilty of running an illegal price-fixing cartel, exposed by The Times newspaper, which had allowed them to drive up fees for thousands of parents.[28] Each school was required to pay a nominal penalty of £10,000 and all agreed to make ex-gratia payments totalling three million pounds into a trust designed to benefit pupils who attended the schools during the period in respect of which fee information was shared.[29] However, Mrs Jean Scott, the head of the Independent Schools Council, said that independent schools had always been exempt from anti-cartel rules applied to business, were following a long-established procedure in sharing the information with each other, and were unaware of the change in the law (on which they had not been consulted). She wrote to John Vickers, the OFT director-general, saying, "They are not a group of businessmen meeting behind closed doors to fix the price of their products to the disadvantage of the consumer. They are schools that have quite openly continued to follow a long-established practice because they were unaware that the law had changed."[30]

In July 2012, it was reported in The Guardian that a member of the teaching staff, Bruce Roth, was found guilty on a total of 17 counts of sexually abusing pupils at the college and at a school in Rochester in Kent, at which he was formerly employed and had taught during the years 1987–1994.[31]

There are 17 houses at Wellington. Most contain boarders and a small number of day pupils, although two, Wellesley and Raglan, accept only day pupils.[32] Each house is either an 'in-house' or an 'out-house'. In-houses are located within the main school buildings and quads; out-houses are located elsewhere on the grounds. Each house has aspects distinguishing it from other houses, such as its own colours and emblem, as well as different locations around the college.

The Orange, Combermere, Hopetoun and Anglesey were previously boys' houses, but changed to girls' houses between 2005 and 2011.[33]

The Old Wellingtonian Society maintains a register of names of all who have passed through the college since the school's opening in 1859 and the addresses of all living alumni.