The Wellington and Drayton Railway was a standard gauge line in Central England which carried through freight and local passenger traffic until closure in the 1960s. It was part of the Great Western Railway's double track Wellington-Crewe line, linking the Midlands to the north and northwest. 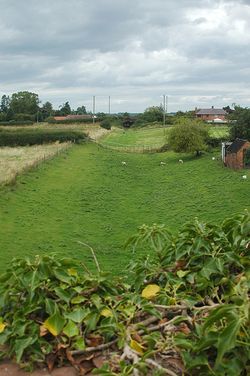 The Wellington and Drayton Railway was incorporated on 7 August 1862, and in November of that year deposited plans for a line connecting Wellington to Market Drayton, together with extensions northwards towards Manchester, to join the LNWR near Minshull Vernon, the Cheshire Midland Railway near Knutsford, the Manchester South Junction and Altrincham Railway and the Bolton Railway at Salford, to provide the Great Western Railway with access to Manchester. Additionally there were plans for a branch from Market Drayton to Newcastle-under-Lyme, but these were abandoned due to opposition from the LNWR and North Staffordshire Railway.

Circumstances changed rapidly, and alliance with the Nantwich and Market Drayton Railway together with running powers from Nantwich to Crewe and onwards to Manchester through amalgamation of the Great Western Railway with the West Midland Railway meant that the northern extensions were no longer needed by the GWR for access to Manchester.

After the first meeting at Malvern, all subsequent Directors' Meetings were held at Paddington station, with Directors supplied by the GWR, and an Act of 14 July 1864 authorised the transfer of the Wellington and Drayton Railway to the GWR on completion of the line. However, this transfer was not formally sealed until 30 August 1877.

The passenger service was withdrawn in 1963. Freight service continued until 1967, the line providing a relief route during the electrification of the London-Crewe line. The lifting of the track was completed during 1970.[1][2]

Passenger traffic was modest, typically about six local stopping trains a day in each direction. Most ran between Crewe and Wellington, some continued to/from Manchester to the north and Worcester or Wolverhampton (for Paddington) to the south, or included through coaches for the extended routes. Following the establishment of several RAF airfields in the area during World War II, the railway gained a new purpose, transporting personnel from the Wellington mainline station to the rural camps. During the line's latter years excursion trains were seen, and during its final year the "Pines Express" between Manchester and Bournemouth used the line.

Freight traffic was much more significant. Typically there were about twenty trains a day in each direction, of which two would be local goods, and the remainder would be through traffic, either non-stop over the line or stopping only at Market Drayton. Principally these carried manufactured goods from the midlands to the northwest, also fruit from the Worcester area. There was little coal and mineral traffic.