A referendum on extending the law-making powers of the National Assembly for Wales was held in Wales on 3 March 2011. The referendum asked the question: "Do you want the Assembly now to be able to make laws on all matters in the 20 subject areas it has powers for?"

The results of the referendum were announced on 4 March 2011. Overall, 63.49% voted 'yes', and 36.51% voted 'no'. In 21 of 22 local authorities the vote was 'yes', with the exception being Monmouthshire by a slim majority. The overall turnout was 35.2%. First Minister Carwyn Jones, welcoming the result, said: "Today an old nation came of age."

In the One Wales coalition agreement on 27 June 2007 the Wales Labour Party and Plaid Cymru made the commitment "to proceed to a successful outcome of a referendum for full law-making powers under Part IV of the Government of Wales Act 2006 as soon as practicable, at or before the end of the Assembly term". The two parties agreed "in good faith to campaign for a successful outcome to such a referendum" and to set up an All-Wales Convention to prepare for such a successful outcome.[3][4]

On 27 October 2007 the then First Minister Rhodri Morgan and the Deputy First Minister Ieuan Wyn Jones appointed Sir Emyr Jones Parry, the recently retired Permanent Representatives from Britain to the United Nations to head the convention.[5] Sir Emyr stated on 22 November 2007 that he would like to begin to work as soon as possible and hoped to have the report ready by 2009 at the latest.[6]

The All Wales Convention reported to the First Minister and the Deputy First Minister on 18 November 2009. It reported that a "yes" vote would be obtainable but not guaranteed. An opinion poll for the convention had found that 47% would vote Yes, and 37% would vote No. The report suggested that the Assembly needed to decide before June 2010 whether to trigger a referendum if the vote was to be held before the next Assembly elections.[7]

On 2 February 2010 the new First Minister Carwyn Jones, who had succeeded Rhodri Morgan on 9 December 2009, confirmed that a trigger vote would be held on 9 February on whether the Assembly should request a referendum on full law making powers.[8] The Welsh Liberal Democrats and Welsh Conservative Party stated they did not want the referendum to be held on the same day as the 2011 Assembly elections and would abstain from voting to trigger the referendum if this date was not ruled out.[8] The trigger vote was held in the Assembly on Tuesday 9 February 2010, and was approved unanimously across all parties, with 53 out of the 60 AMs voting for it. Under the Government of Wales Act 2006 the First Minister was required to send a letter within two weeks to the Welsh Secretary (then Peter Hain), who would than have 120 days to lay a draft order for a referendum before Parliament.[9] It was expected that the referendum date would not be set until after the general election.

On 15 June 2010 Cheryl Gillan, the new Welsh Secretary in the Conservative--Liberal Democrat coalition government at Westminster, announced that the referendum would probably be held between January and March 2011.[10] Others proposed that it should be held on 5 May 2011, together with both the Assembly elections and the AV referendum.[11] It was agreed that the referendum be held on 3 March 2011, after representations to the Welsh Secretary from the Welsh Government.[12]

The draft referendum question submitted by the Welsh Secretary to the Electoral Commission on 23 June 2010 was:

If most people vote 'yes' in this referendum, the Assembly will gain powers to pass laws on all subjects in the devolved areas.

If most people vote 'no', then the present arrangements, which transfer that law-making power bit by bit, with the agreement of Parliament each time, will continue.

Do you agree that the Assembly should now have powers to pass laws on all subjects in the devolved areas without needing the agreement of Parliament first?[13]

This wording was, however, criticised by the Welsh Government.[14]

A revised question was released in September 2010:[15]

The National Assembly for Wales - what happens at the moment

The Assembly has powers to make laws on 20 subject areas, such as agriculture, education, the environment, health, housing, local government.

The Assembly cannot make laws on subject areas such as defence, tax or welfare benefits, whatever the result of this vote.

If most voters vote 'yes' - the Assembly will be able to make laws on all matters in the 20 subject areas it has powers for, without needing the UK Parliament's agreement.

If most voters vote 'no' - what happens at the moment will continue.

Do you want the Assembly now to be able to make laws on all matters in the 20 subject areas it has powers for?

A summary table of poll results in advance of the referendum is set out below. 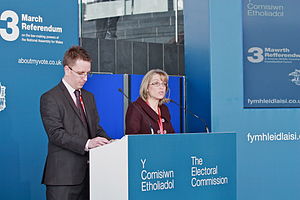 Referendum result announced at the Senedd

The results were counted and announced on 4 March 2011, locally initially and then formally confirmed at the Senedd.

In 21 of 22 unitary authorities, the vote was Yes. The only voting area to declare a No result was Monmouthshire, which was announced following a recount. The difference was only 320 votes.[21]

The overall result was:

Provisional turnout (as per Electoral Commission): 35.2%[22] 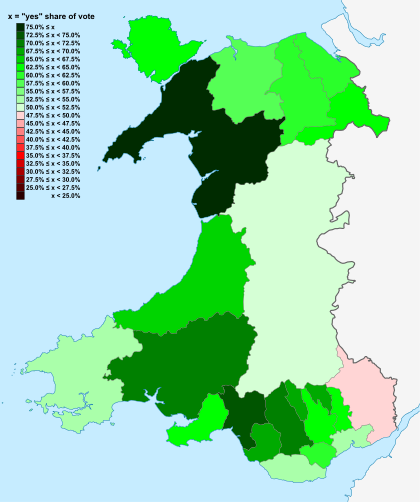 Reactions to the result

Deputy First Minister and Plaid Cymru leader Ieuan Wyn Jones said that it marked "the beginning of a new era of Welsh devolution - the decade to deliver for Wales.... To demand respect, you must first display self-respect. Today we have done just that, and the rest of the world can now sit up and take notice of the fact that our small nation, here on the western edge of the continent of Europe, has demonstrated pride in who we are, and what we all stand for."[23]

Kirsty Williams, leader of the Welsh Liberal Democrats, said that the referendum showed that people "wanted to endorse and strengthen devolution," but they "also want it to work better". She said that voters were right to show "widespread dissatisfaction" with the Assembly Government's performance.[24]

Welsh Secretary Cheryl Gillan, a member of the Conservative, said that there had been concern over turnout, but called it "a good day for Wales".[23] She said that the British Government would reinforce its commitment to make the arrangements work effectively.

Roger Lewis, Chairman of the Yes for Wales campaign, said he was delighted, adding: "It is clear, the people of Wales have spoken."

Rachel Banner, of the No campaign, said that it marked a "turning point for our nation".[23] She questioned the legitimacy of the result, asking: "Has it got the full-hearted consent of the Welsh people?" She also stated that she did not believe that the 42 backbench members of the Assembly could provide high-quality scrunity of the activities of the Welsh Government.[25]