From Infogalactic: the planetary knowledge core
Jump to: navigation, search
For other uses, see Welshpool (disambiguation).

Welshpool (Welsh: Y Trallwng) is a town in Wales, historically in the county of Montgomeryshire, but currently administered as part of the unitary authority of Powys. The town is 4 miles (6 km) from the Wales–England border and low-lying on the River Severn; its Welsh language name Y Trallwng literally means "the marshy or sinking land". Welshpool is the fourth largest town in Powys.

In English it was initially known as Pool but its name was changed to Welshpool in 1835 to distinguish it from the English town of Poole.[2] It has a population of 6,664 (United Kingdom Census 2011), contains much Georgian architecture and is just north of Powis Castle. 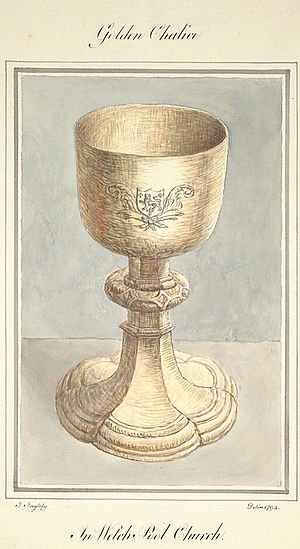 A golden chalice in seen in Welchpool Church, 1794

St Cynfelin (he is also known as St Matu) is reputed to be the founder of the church of St Mary's and St Cynfelin's in the town during "the age of the saints in Wales" in the 5th and 6th centuries.

The parish of Welshpool roughly coincides with the medieval commote of Ystrad Marchell in the cantref of Ystlyg in the Kingdom of Powys.

The Long Mountain, which plays as a backdrop to most of Welshpool, once served as the ultimate grounds for defence for fortresses in the times when the town was just a swampy marsh. Welshpool served briefly as the capital of Powys Wenwynwyn or South Powys after its prince was forced to flee the traditional Welsh royal site at Mathrafal in 1212. After 1284 Powys Wenwynwyn ceased to exist.

The town was devastated by the forces of Owain Glyndŵr in 1400 at the start of his rebellion against the English king Henry IV. Today the waymarked long-distance footpath and National Trail Glyndŵr's Way runs through the town.

In 1411 the priest at the church St Mary's and St Cynfelin's was Adam of Usk. 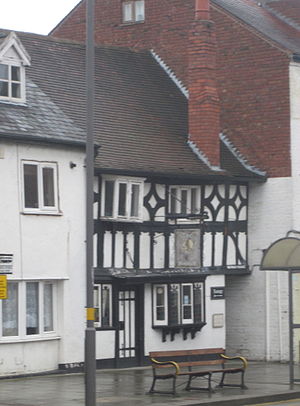 The Mermaid Inn, 28 High Street, Welshpool. Very probably an early 16th century merchant’s house, placed on a burgage plot between the High Street and Alfred Jones Court. Timber framed building with long storehouse or wing to the rear. The frontage was remodelled c. 1890, by Frank H. Shayler, architect, of Shrewsbury. Early illustrations of the building show that prior to this it had a thatched roof, and that the timbering was not exposed. Two bay building. Passage to side with heavy box-framing in square panels, with brick infill exposed in side elevation and in rear wing. The frontage was exposed by Shayler to show decorative timber work on the upper storey. An Inn by the 19th century when it was owned by a family named Sparrow.[3] 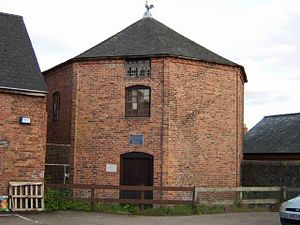 There is an octagonal brick cockpit in New Street, which was built in the early 18th century and was in continual use for cockfighting until the practice was outlawed by the Cruelty to Animals Act 1849.[4] As of 2015[update], it is the home of the town's WI (Women's Institute). 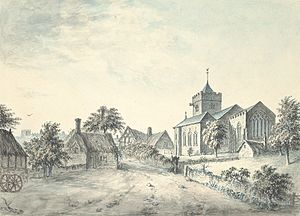 Welshpool railway station is on the Cambrian Line and is served by Arriva Trains Wales. The town is also the starting point of the Welshpool and Llanfair Light Railway, a narrow-gauge heritage railway popular with tourists, with its terminus station at Raven Square. The light railway once ran through the town to the Cambrian Line railway station, but today Raven Square, located on the western edge of the town, is the eastern terminus of the line.

A small network of bus services link surrounding towns and villages, mainly operated by Tanat Valley Coaches. Notable is service No X75, serving Shrewsbury to the east and Newtown and Llanidloes to the south west, also service No D71 to Oswestry via Guilsfield and Llanymynech. In addition there is a local town service operated by Owen's Coaches. The semi-disused Montgomery Canal also runs through Welshpool. To the south of the town is Welshpool Airport which is also known as the Mid Wales Airport. Three major trunk roads pass through Welshpool: the A458, A483 and the A490.

The local economy is primarily based upon agriculture and local industry. The Smithfield Livestock Market is the largest one-day sheep market in Europe, whilst the town's industrial estates are home to numerous different types of small industry. Due to the town's small size and population the attraction of high street stores is limited, meaning many of the residents are forced to shop in neighbouring towns like Newtown and Shrewsbury.

Welshpool has a football club and a rugby union club, the former being Welshpool Town F.C. and the latter, Welshpool Rugby Football Club. The town also has hockey and cricket clubs. The Montgomeryshire Marauders Rugby League Club are also nominally based in Welshpool, as this is where the majority of their home fixtures take place.