He was the only son of King Ottokar II of Bohemia and Ottokar's second wife Kunigunda. He was born in 1271, ten years after the marriage of his parents. Kunigunda was the daughter of Rostislav Mikhailovich, lord of Slavonia, son of a Grand Prince of Kiev, and Anna of Hungary, daughter of Béla IV of Hungary. His great-grandfather was the German king Philip of Swabia. Wenceslaus II was the grandfather of the Holy Roman Emperor, Charles IV. He was a member of the Přemyslid dynasty.

In 1276 Rudolf I, King of the Romans, placed Ottokar under the ban of the empire and besieged Vienna. This compelled Ottokar in November 1276 to sign a new treaty by which he gave up all claims to Austria and the neighbouring duchies, retaining for himself only Bohemia and Moravia. Ottokar's son Wenceslaus was also betrothed to Rudolph's daughter Judith. It was an uneasy peace. Wenceslaus's father died on 26 August 1278 in the Battle on the Marchfeld shortly before Wenceslaus' seventh birthday.

Before Wenceslaus became of age, the government was handled by Otto V, Margrave of Brandenburg, who is said to have held Wenceslaus captive in several locations. He returned to Bohemia in 1283, at the age of twelve. His mother's second husband, Záviš of Falkenštejn, ruled instead of him for a few years.

On 24 January 1285, Wenceslaus married Judith of Habsburg, daughter of Rudolf I, to whom he had been betrothed since 1276. In 1290, Wenceslaus had Záviš beheaded for alleged treason and began ruling independently.

King of Bohemia and Poland 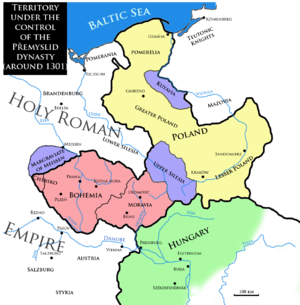 Territory under the control of the Přemyslids, c. 1301

In 1298, silver was discovered at Kutná Hora in Central Bohemia. Wenceslaus took control of the mine by making silver production a royal monopoly and issued the Prague groschen, which became the most popular of the early Groschen-type coins. Kutná Hora was one of the richest European silver strikes ever: between 1300 and 1340 the mine may have produced as much as 20 tons of silver a year.

In 1300, Wenceslaus issued the new royal mining code Ius regale montanorum. This was a legal document that specified all administrative as well as technical terms and conditions necessary for the operation of mines.[4]

The Crown of Hungary and death 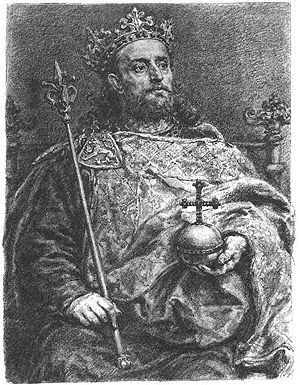 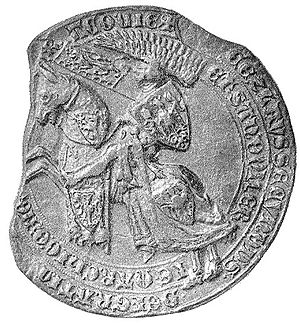 Queen Judith died in 1297. Wenceslaus' second wife was Elisabeth Richeza, daughter of Przemysł II, King of Poland (1295–1296). Later she remarried to Rudolph of Habsburg, duke of Austria, who also became king of Bohemia for a brief period in those unruly years.

In 1301, Wenceslaus' kinsman Andrew III of Hungary died and the Árpád dynasty became extinct in the male line. Wenceslaus was one of the relatives who claimed the throne, and he accepted it from a party of Hungarians on behalf of his young son, betrothed to Andrew's only child, Elizabeth. On 27 August 1301, his son was crowned in Székesfehérvár as King of Hungary under the name Ladislaus V (Hungarian: László,[5] Czech, Slovak and Croatian: Ladislav).

At that time the Kingdom of Hungary was split into several de facto principalities, and young Wenceslaus was only accepted as the King of Hungary by the rulers in modern Slovakia (Matthew III Csák), in Burgenland (the Güssings [Kőszegis]) and on territory around the capital, Buda. But the Abas and Matthew Csák switched sides in 1303 and started to support Wenceslaus' rival Charles Robert of Anjou. Consequently, the young Wenceslaus, in Ofen (Buda), became afraid and wrote to his father in Prague for help. His father took a large army and invaded Buda, but having considered the situation, he took his son and the Hungarian crown and returned to Bohemia (1304). Ivan of Güssing was named to represent Wenceslaus III in Hungary.

Wenceslaus II died in 1305, at the age of 33, probably of tuberculosis. He was succeeded by his son, Wenceslaus III (Václav III.), the last of the Přemyslid kings in the male line.

Review of government of Wenceslaus II

Wenceslaus II is considered as one of the most important Czech Kings. He built a great empire stretching from the Baltic Sea to the Danube river and established numerous cities, such as Plzeň in 1295. He won for his family three royal crowns (Bohemia, Hungary and Poland). The Kingdom of Bohemia was the largest producer of silver in Europe in his time. He created the penny of Prague, which was an important European currency for centuries.

During his reign, there was great urban development. He planned to build the first university in Central Europe. The power and wealth of the Kingdom of Bohemia gave rise to great respect, but also to the hostility of European royal families. His son King Wenceslaus III was unable to maintain a mighty empire, and soon after the untimely death of Wenceslaus II, his empire began to crumble.[6]

He was married twice:[3]

In 1285 in Eger (Cheb), he married Judith of Habsburg (1271–1297), daughter of Rudolph I of Germany and his wife Gertrude of Hohenburg. She died shortly after their 10th child was born: