Wensleydale is a style of cheese originally produced in Wensleydale, North Yorkshire, England, but now mostly made in large commercial creameries throughout the UK.

Wensleydale cheese was first made by French Cistercian monks from the Roquefort region, who had settled in Wensleydale. They built a monastery at Fors, but some years later the monks moved to Jervaulx in Lower Wensleydale. They brought with them a recipe for making cheese from sheep's milk.[4] During the 14th century cows' milk began to be used instead, and the character of the cheese began to change. A little ewes' milk was still mixed in since it gave a more open texture, and allowed the development of the blue mould. At that time, Wensleydale was almost always blue with the white variety almost unknown. Nowadays, the opposite is true, with blue Wensleydale rarely seen. When the monastery was dissolved in 1540 the local farmers continued making the cheese right up until the Second World War, during which most milk in the country was used for the making of "Government Cheddar".[5] Even after rationing ceased in 1954, cheese making did not return to pre-war levels.[6] 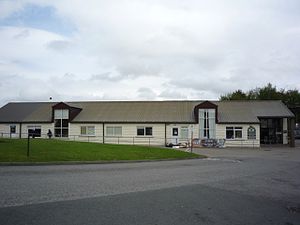 Wensleydale Creamery in the town of Hawes has been hand-making cheese for more than 100 years. In May 1992, Dairy Crest, a subsidiary of the Milk Marketing Board, closed the Hawes creamery with the loss of 59 jobs. This was the last creamery in the dale.[citation needed] Dairy Crest transferred production of Wensleydale cheese to Yorkshire's traditional rival, Lancashire. Six months later, in November 1992, following many rescue offers, a management buyout took place, led by local businessman John Gibson and the management team. With the help of eleven members of the former workforce, cheese making recommenced in Wensleydale.[7] It now (2012) employs 190 locals and buys from 36 farms located in Wensleydale.

The main types of cheese produced by the Wensleydale Creamery are:[citation needed]

Wensleydale Dairy Products sought to protect the name Yorkshire Wensleydale under an EU regulation; PGI status was awarded in 2013.[1][8][9]

The flavour of Wensleydale is suited to combination with sweeter produce, such as fruit. A popular combination available in many restaurants and delicatessens is Wensleydale containing cranberries.[citation needed]

In Yorkshire, apple pie may be accompanied by white Wensleydale, giving rise to the saying 'an apple pie without the cheese is like a kiss without the squeeze'.[10]

In Yorkshire and North East England it is often eaten with fruit cake or Christmas cake.[citation needed]

In his essay "In Defence of English Cooking", George Orwell rates Wensleydale as second only to Stilton among British cheese varieties.

Wensleydale was one of the cheeses named by John Cleese in the Monty Python sketch "The Cheese Shop", which originally appeared in a 1972 episode of Monty Python's Flying Circus. In addition, the shop owner, played by Michael Palin, was named 'Henry Wensleydale', which caused some confusion between the two when the cheese was mentioned.

In the 1990s, sales of Wensleydale cheese had fallen so low that production was at risk of being suspended.[11] However, the popular Wallace and Gromit animated shorts A Grand Day Out and A Close Shave had the main character Wallace, a cheese connoisseur, mention Wensleydale as a particularly favourite cheese. Animator Nick Park chose it solely because it had a good name that would be interesting to animate rather than due to its origins in northern England where the shorts were set. He was also unaware of the financial difficulties that the company was experiencing.[12] The company contacted Aardman Animations about a licence for a special brand of "Wallace and Gromit Wensleydale", which proved to be an enormous success.[13] When the 2005 full-length Wallace and Gromit film, Curse of the Were-Rabbit, was released, sales of Wensleydale cheeses increased by 23%.[14][15]