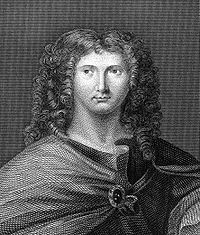 The Earl of Roscommon

Dillon was born in Ireland about 1633, the only son of James Dillon, 3rd Earl of Roscommon and Elizabeth Wentworth.[1][2] He was a nephew of Thomas Wentworth, Earl of Strafford, and was educated partly under a tutor at Wentworth Woodhouse, his uncle's family seat in Yorkshire, partly at Caen in Normandy and partly at Rome. His father was killed accidentally in 1649: according to family tradition Wentworth exclaimed "My father is dead!" at the moment it happened, two weeks before the news could have reached him.

After the Restoration he returned to England, and was well received at court. In 1649 he had succeeded to the Earldom of Roscommon, which had been created in 1622 for his great-grandfather, James Dillon; and he was now put in possession by an act of the Irish Parliament of all the lands possessed by his family before the Civil War. As Captain of the Gentlemen Pensioners he found abundant opportunity to indulge the love of gambling, which appears to have been his only vice. He fought a number of duels, but unlike his uncle Carey, later the 5th Earl, he is not known to have killed any of his opponents. Disputes with the Lord Robartes, the Lord Privy Seal about his Irish estates necessitated his presence in Ireland, where he gave proof of some eloquence in debate, and of some business capacity. On his return to London he was made Master of the Horse to the Duchess of York. He was twice married, in 1662 to Lady Frances Boyle, daughter of Richard Boyle, 1st Earl of Burlington, and widow of Colonel Francis Courtenay, and in 1674 to Isabella Boynton, who outlived him and died in 1721. He had no issue by either marriage.

His reputation as a didactic writer and critic rests on his blank verse translation of the Ars Poetica (1680) and his Essay on Translated Verse (1684). The essay contained the first definite enunciation of the principles of poetic diction, which were to be fully developed in the reign of Queen Anne. Roscommon, who was fastidious in his notions of dignified writing, was himself a very correct writer, and quite free from the indecencies of his contemporaries. Alexander Pope, who seems to have learnt something from his carefully balanced phrases and the regular cadence of his verse, says that "In all Charles's days, Roscommon only boasts unspotted bays"; in his "Essay on Criticism," when Pope lists poets he admires, beginning from the classical age, Roscommon is one of two British poets he includes (William Walsh is the other).

Roscommon believed that a low code of morals was necessarily followed by a corresponding degradation in literature, and he insists that sincerity and sympathy with the subject in hand are essential qualities in the poet. This elevated conception of his art is in itself no small merit. He has, moreover, the distinction of having been the first critic to avow his admiration for Milton's Paradise Lost. Roscommon formed a small literary society which he hoped to develop into an academy with authority to formulate rules on language and style, but its influence only extended to a limited circle, although it included such men of distinction as John Dryden and George Savile, 1st Marquess of Halifax, and the scheme fell through after its promoter's death.

Lord Roscommon died on 18 January 1685 and was buried in Westminster Abbey on 21 January 1685. The title passed to his uncle, Carey Dillon, 5th Earl of Roscommon (1627–1689), the "Colonel Dillon" of the Diary of Samuel Pepys. In 1746, on the death of James, the 8th earl, it passed to Robert Dillon (d. 1770), a descendant of the first earl. His family became extinct in 1816, and in 1828 Michael James Robert Dillon, another descendant of the 1st earl, established his title to the earldom before the House of Lords. When he died in May 1850 it became extinct. Roscommon's poems were collected in 1701, and are included in Anderson's and other collections of the British poets. He also translated into French from the English of Dr. W. Sherlock, Traitti louchant lobissance passive (1686).