Werburh or Wærburh (also known as Werburgh and Werburga) (d. 3 February 699 at Trentham) was an Anglo-Saxon princess who became an English saint and the patron saint of Chester. Her feast day is 3 February.

She was born at Stone (now in Staffordshire),[3] and was the daughter of King Wulfhere of Mercia (himself the Christian son of the pagan King Penda of Mercia) and his wife St Ermenilda, herself daughter of the King of Kent. She obtained her father's consent to enter the Abbey of Ely, which had been founded by her great aunt Etheldreda (or Audrey), the first Abbess of Ely and former queen of Northumbria, whose fame was widespread. Werburgh was trained at home by St. Chad (afterwards Bishop of Lichfield), and by her mother; and in the cloister by her aunt and grandmother. Werburgh was a nun for most of her life. During some of her life she was resident in Weedon Bec, Northamptonshire.

Werburh was instrumental in convent reform across England. She eventually succeeded her mother Ermenilda, her grandmother Seaxburh, and great-aunt Etheldreda as fourth Abbess of Ely.

Werburgh died on 3 February 700. She was buried at Hanbury in Staffordshire and her remains were later transferred to Chester, of which church and monastery she became the great patroness (see Chester Cathedral).

The most famous legend relates to the story of a goose that St Werburgh restored to life.[1] It is said that she banished all the geese from the village of Weedon Bec, Northamptonshire, and that to this day no geese will settle in the village. – There is a stained glass window in the Church of St Peter & St Paul, Weedon Bec, Northants, showing the story.[4] 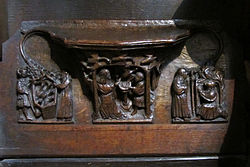 Miracles of St Werburgh, including the resurrection of the goose, depicted on a misericord at Chester Cathedral

By the year 708 her brother Cenred had succeeded as king of Mercia; he now decided to move his sister's body to a more conspicuous place within the church at Hanbury. Her body was found to be miraculously intact. This was considered to be a sign of divine favour, and her tomb therefore became an object of veneration and a centre for pilgrimage. Her brother is said to have been so affected by this miracle that he decided to abdicate and enter holy orders himself.[3] It is possible that the anecdote about the saint reviving the goose dates from this time.

The shrine of St Werbergh remained at Hanbury for the next 160 years or so but due to the threat from Viking raiders in the 9th century, the shrine was relocated in 875 to the Church of St. Peter and St. Paul which lay within the protection of the city walls of Chester. During the Middle Ages, the badge of a basket of geese was adopted as proof of having made a pilgrimage to the Shrine of St Werburgh.[1]

The city of Chester therefore became the focus for the cult of Werburga. Sometime later, the Church of St. Peter and St. Paul was re-dedicated to St. Werburh and St Oswald around the year 975, when a monastery was also built in the names of these two saints.

In 1057 the church was rebuilt and further endowed by Leofric, Earl of Mercia. By this time, St. Werburh was regarded as the protector and patron saint of the city, after the supposed miraculous withdrawal of the Welsh king Gruffudd ap Llywelyn from a siege of the city.

St. Werburh remained popular after the Norman conquest. In 1093, the Norman Earl of Chester, Hugh d'Avranches, better known as "Hugh the Wolf" to the Welsh, further endowed the abbey and its church. He also established a Benedictine monastery, with monks from Bec Abbey in Normandy, which had provided the first two post-Conquest Archbishops of Canterbury: Lanfranc and Anselm. Like many other Anglo-Norman barons, Hugh d'Avranches entered the monastery himself shortly before he died. He was buried therein. The abbey became Chester Cathedral in 1540 and was rededicated to Christ and the Blessed Virgin Mary.

An elaborate shrine had been constructed in the fourteenth century but did not survive the reign of Henry VIII. When the abbey was dissolved, the shrine was broken up and the remains of the saint scattered. The various remains of the shrine that survived were collected together in 1876, reassembled, and now remain on display to this day at the Lady Chapel of the cathedral.

St Werburh remains the patron saint of Chester. Her feast day is 3 February.

At least 10 churches in England, and some overseas, are dedicated to her, including the church of St Werburgh's at Wembury, near Plymouth, Devon.[5] and St. Werburgh's Church, Dublin.

A suburb of Bristol, in the South West of England, just north of the city centre, is named St Werburghs.

A village in Kent is named Hoo St Werburgh.

A station on the Manchester Metrolink line to East Didsbury is called St Werburgh's Road (after a local road of the same name).