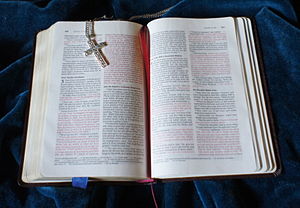 Scripture is the primary source of theological authority in the Quadrilateral 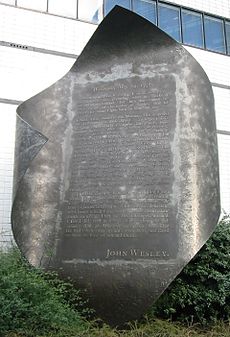 Personal experience is an additional source of authority. Pictured is a memorial to Wesley's own conversion and experience of assurance.

The Wesleyan Quadrilateral,[1] or Methodist Quadrilateral,[2] is a methodology for theological reflection that is credited to John Wesley, leader of the Methodist movement in the late 18th Century. The term itself was coined by 20th century American Methodist scholar Albert C. Outler.[3][4]

This method based its teaching on four sources as the basis of theological and doctrinal development, scripture, tradition, reason, and experience.

Upon examination of Wesley's work, Outler theorized that Wesley used four different sources in coming to theological conclusions.[5] Wesley believed, first of all, that the living core of the Christian faith was revealed in "scripture" as the sole foundational source. The centrality of scripture was so important for Wesley that he called himself "a man of one book".[6] However, doctrine had to be in keeping with Christian orthodox "tradition." So, tradition became in his view the second aspect of the so-called Quadrilateral. Furthermore, believing, as he did, that faith is more than merely an acknowledgment of ideas, Wesley as a practical theologian, contended that a part of the theological method would involve "experiential" faith. In other words, truth would be vivified in personal experience of Christians (overall, not individually), if it were really truth. And every doctrine must be able to be defended "rationally." He did not divorce faith from reason. Tradition, experience, and reason, however, are subject always to scripture, which is primary.

In practice, at least one Christian denomination based on the teaching of Wesley, the United Methodist Church, asserts that "Wesley believed that the living core of the Christian faith was revealed in Scripture, illumined by tradition, vivified in personal experience, and confirmed by reason. Scripture [however] is primary, revealing the Word of God 'so far as it is necessary for our salvation.'"[10]

Wesley saw his four sources of authority not merely as prescriptive of how one should form their theology, but also as descriptive of how almost anyone does form theology. As an astute observer of human behavior, and a pragmatist, Wesley's approach to the Quadrilateral was most certainly phenomenological, describing in a practical way how things actually work in actual human experience. Thus, when Wesley speaks of "Tradition," he does not merely refer to ancient Church Tradition and the writings of the great theologians and Church Fathers of days past, but also of the immediate and present theological influences which contribute to a person's understanding of God and of Christian theology. "Tradition" may include such influences as the beliefs, values, and instruction of one's family and upbringing. It may also include the various beliefs and values which one encounters and which have an effect on one's understanding of Scripture.

In United Methodist understanding, both laypeople and clergy alike share in “our theological task.” The theological task is the ongoing effort to live as Christians in the midst of the complexities of a secular world. Wesley's Quadrilateral is referred to in Methodism as "our theological guidelines” and is taught to its pastors in seminary as the primary approach to interpreting the scriptures and gaining guidance for moral questions and dilemmas faced in daily living.[11]