West Chester is a borough and the county seat of Chester County, Pennsylvania in the U.S. state of Pennsylvania.[1] The population was 18,461 at the 2010 census.[2]

West Chester University of Pennsylvania is located in the borough. Valley Forge, the Brandywine Battlefield, Marsh Creek State Park, and other historical attractions are nearby, as are Longwood Gardens, the Brandywine River Museum, and Christian C. Sanderson Museum.

The area was originally known as Turk's Head — after the inn of the same name located in what is now the center of the borough.[3] West Chester has been the seat of government in Chester County since 1786, and the borough incorporated in 1799.[4] In the heart of town is its courthouse, a classical revival building designed in the 1840s by Thomas U. Walter, one of the architects for the Capitol in Washington, D.C.[5] In the 18th century West Chester was a center of clockmaking. In the late 19th century the Hoopes, Bro. and Darlington company became a major wheelworks, first for wagons and later automobiles.[6][7] In the early 20th century, an important industry was the Sharples cream separator company.[8] In the late 20th century, Commodore International, one of the pioneers of home computers, giving its headquarters as West Chester, was located approximately a mile northeast of the borough.

According to the United States Census Bureau, the borough has a total area of 1.8 square miles (5 km2), all of it land. 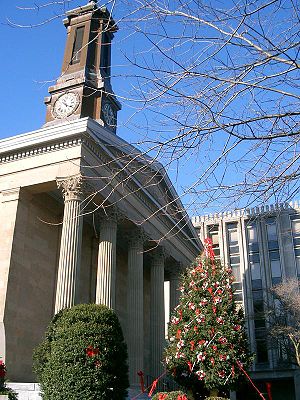 The West Chester Public Library has provided library services to area residents since 1872. It currently has a collection of 50,000 items and receives 110,000 visits every year.[27] The Francis Harvey Green Library on the university campus has additional collections.[28]

The Daily Local News is a daily newspaper headquartered in West Chester that covers Chester County events.[29] The Quad is the student-run newspaper of West Chester University. Beginning in 1932, it covers not only campus events but also regional and national news.[30] Radio station WCUR broadcasts from the borough and is managed by university students.[31] 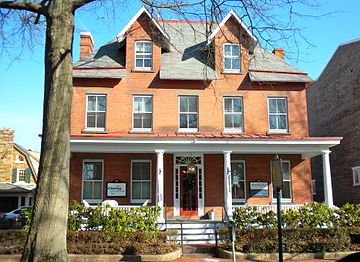 The main east-west road to West Chester is West Chester Pike, which begins in Upper Darby, Delaware County, just outside Philadelphia, and is part of PA 3.[40] The West Chester Pike originally existed as a private turnpike connecting Philadelphia and West Chester between 1850 and 1918, at which time it became a public road.[41] In West Chester, PA 3 follows Market Street eastbound and Gay Street westbound. The main north-south road in West Chester is High Street. To the north of town, the road is known as Pottstown Pike, which connects to PA 100 in Exton (PA 100 formerly ran through town). To the south of town, the road is known as Wilmington-West Chester Pike (US 202 and US 322). US 202 and US 322 both bypass the center of West Chester on the limited-access West Chester Bypass, with US 202 heading northeast to King of Prussia and south to Wilmington, Delaware and US 322 heading northwest to Downingtown and southeast to Chester. US 322 Business passes through West Chester along Hannum Avenue, Chestnut and Market streets, and South High Street. Other state routes serving West Chester include PA 162 and PA 842, which head west towards Unionville, and PA 52, which heads southwest towards Kennett Square.[40]

Until September 1986, West Chester was served by SEPTA's R3 commuter rail line, then known as the Media/West Chester line. Service on the line was discontinued because of poor track conditions west of the Elwyn station. At the time, SEPTA had limited funds for the necessary repairs, and offered Chester County the option of either improving the rail line or expanding parking availability at the nearby Exton station on SEPTA's Paoli/Thorndale Line. The county opted for the latter and service on the line was cut back to its current terminus of Elwyn. The rail line into West Chester is used by the West Chester Railroad, a heritage railroad.

The borough is governed by the town council form of government. Led by the Borough Manager, there are seven council members each representing one of the seven voting wards. The council controls all departments except the Police Department (the Mayor directs Police Department activities through the Chief of Police). The mayor and council members are directly elected by borough voters. In January 2010, Carolyn Comitta took office as the borough's 58th Mayor. In succeeding the term-limited incumbent, Republican Dick Yoder,[44] Comitta became West Chester's first ever female Mayor, and the first Democrat to hold the office since 1992.[45]