West Columbia, part of the greater Columbia, SC metropolitan statistical area, is a city in the suburban eastern sections of Lexington County, South Carolina, United States. According to the 2010 census, the population was 14,988.

West Columbia lies west of Columbia, South Carolina, directly across the Congaree River. It's near Columbia's city center or downtown district as well as the South Carolina State House and the Congaree Vista, known locally as "the Vista."

West Columbia is bordered to the south by its sister suburb, Cayce, SC. 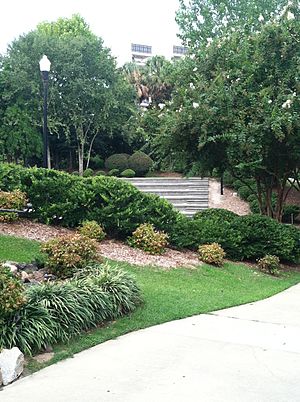 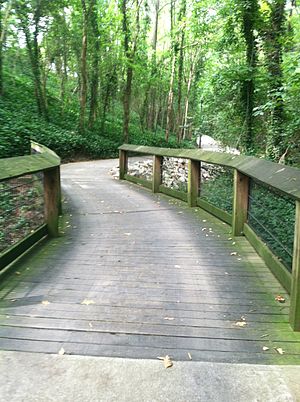 The park offers views of Columbia's skyline, but it's the river and the, largely undisturbed, ancient floodplain forest that offer visitors the best views.

The entire Riverwalk system is an interesting mixture of a city park and the natural beauty of a state park trail. The park system has wide, paved walkways and is completely wheelchair accessible. And, the park is lighted and has emergency call boxes spaced along the entire length of the park.

West Columbia is also home to the Lexington Medical Center, one of the region's largest hospital systems. Its address is 2720 Sunset Blvd., West Columbia, SC 29169

West Columbia was incorporated in 1894 as Brookland, but the United States Postal Service called the town "New Brookland" since there was another town called Brookland. In 1936, the name was changed to West Columbia to emphasize its proximity to Columbia, South Carolina.[1] Numerous businesses, churches and a high school retain the Brookland and New Brookland names.

West Columbia lies to the south and west of the Saluda and Congaree Rivers.

There were 5,968 households out of which 22.0% had children under the age of 18 living with them, 37.5% were married couples living together, 14.3% had a female householder with no husband present, and 44.7% were non-families. 36.1% of all households were made up of individuals and 13.0% had someone living alone who was 65 years of age or older. The average household size was 2.13 and the average family size was 2.76.

Lexington County School Districts One and Two serve West Columbia. White Knoll High School serves some of the city's residents who live in District One, and there are two high schools in District Two, Brookland-Cayce High School and Airport High School.

The nearby University of South Carolina, Columbia, is just across the river. Midlands Technical College also operates their Airport campus near the Columbia Metropolitan Airport. There are two historically black colleges in Columbia: Allen University and Benedict College. And, there is also Columbia College (South Carolina), a private women's liberal arts college.

The airport serves as the regional National Weather Service radar station and Weather Forecast Office for eighteen counties in South Carolina and five counties in Georgia.