From Infogalactic: the planetary knowledge core
Jump to: navigation, search
File:Pittsburgh WEO Day 1.JPG
Daytime view from the West End Overlook, with the West End Bridge in the foreground and the downtown skyline in the background 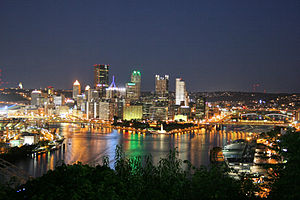 The West End-Elliott Overlook Park (often shortened to "West End Overlook") is a small municipal park and scenic viewpoint in the Elliott neighborhood of Pittsburgh, Pennsylvania.

In 2003 the park was redesigned with landscaped gardens and a walkway under shade trees. Terraced stone banks provide seats for tourists. The park affords a sweeping view of the valleys of the Allegheny, Monongahela, and Ohio Rivers as well as Downtown Pittsburgh.