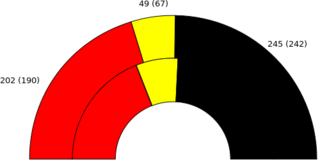 Federal elections were held in West Germany on 19 September 1965. The CDU/CSU remained the largest faction, while the Social Democratic Party remained the largest single party in the Bundestag, winning 202 of the 496 seats (as well as 15 of the 22 non-voting delegates for West Berlin).