The West Indian manatee (Trichechus manatus) or "sea cow" is a manatee, and the largest surviving member of the aquatic mammal order Sirenia (which also includes the dugong and the extinct Steller's sea cow).

Both the Florida manatee and the Antillean manatee are endangered and have been of great conservation concern to federal, state, private, and nonprofit organizations to protect these species from natural and human-induced threats.[8]

Like the other sirenians, the West Indian manatee has adapted fully to an aquatic life style, having no hind limbs. Pelage cover is sparsely distributed across the body, which may play a role in reducing the build-up of algae on their thick skin. The average West Indian manatee is about 2.7–3.5 m (8.9–11.5 ft) long and weighs 200–600 kg (440–1,320 lb), with females generally larger than males.[9] The difference between the two subspecies of the West Indian manatee is that the Florida manatee is commonly reported as being larger in size compared to Antillean manatee.[10] The largest individual on record weighed 1,655 kg (3,649 lb) and measured 4.6 m (15 ft) long.[11][12] This manatee's color is gray or brown. Its flippers also have either three or four nails, so it can hold its food as it is eating. 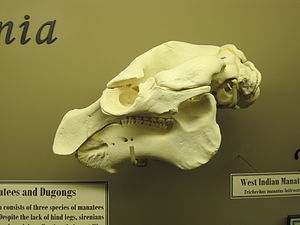 Skull of a West Indian manatee on display at The Museum of Osteology, Oklahoma City, Oklahoma

As its name implies, the West Indian manatee lives in the West Indies, or Caribbean, generally in shallow coastal areas. However, it is known to withstand large changes in water salinity, so has also been found in shallow rivers and estuaries. It can live in fresh, brackish, and saline water. It is limited to the tropics and subtropics due to an extremely low metabolic rate and lack of a thick layer of insulating body fat. While this is a regularly occurring species along coastal southern Florida, during summer, this large mammal has even been found as far north as Dennis, Massachusetts and as far west as Texas.[13] 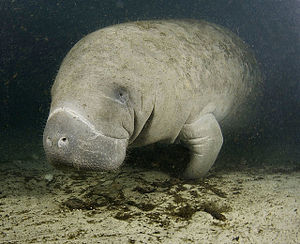 The Florida manatee (Trichechus manatus latirostris), a subspecies of the West Indian manatee, is the largest of all living sirenians. Florida manatees inhabit the most northern limit of sirenian habitats. Over three decades of research by universities, governmental agencies, and NGOs has contributed to understanding of Florida manatee ecology and behavior. They are found in freshwater rivers, in estuaries, and in the coastal waters of the Gulf of Mexico and the Atlantic Ocean. Florida manatees may live to be more than 28 years old in the wild, and one captive manatee, "Snooty", has lived for over 60 years.[14]

The greatest threat to the Florida manatee population is the potential future loss of warm-water habitat; vessel strikes are believed to be the greatest limiting factor to the speed at which the manatee population can recover from stochastic events,[15] although more recent assessments (2013) offer more optimistic projections.[16] Large concentrations of Florida manatees are located in the Crystal River and Blue Springs regions in central and north Florida, as well as along the Atlantic Coast, and Florida Gulf Coast.

The other subspecies of the West Indian manatee is sometimes referred to as the Antillean manatee (T. m. manatus). Antillean manatees are sparsely distributed throughout the Caribbean and the northwestern Atlantic Ocean, from Mexico, east to the Greater Antilles, and south to Brazil. They are found in French Guiana, Suriname, Guyana, Trinidad (but with a lack of recent sightings), Venezuela, Colombia, Panama, Costa Rica, Nicaragua, Honduras, Guatemala, Belize, Mexico, Trinidad, Cuba, Haiti, the Dominican Republic, Jamaica, and Puerto Rico. Historically, Antillean manatees were hunted by local natives and sold to European explorers for food. Today, they are threatened by loss of habitat, poaching, entanglement with fishing gear, and vessel strikes. 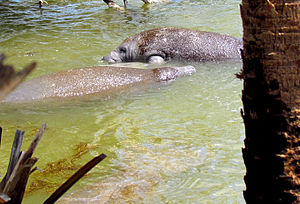 The West Indian manatee is surprisingly agile in water, and individuals have been seen doing rolls, somersaults, and even swimming upside-down. Manatees are not territorial and do not have complex predator avoidance behavior, as they have evolved in areas without natural predators. The common predators of marine mammals, such as killer whales and large sharks, are rarely (if ever) found in habitats inhabited by this species.

Based upon their behavior, Bauer et al. (2010) suggests that manatees may obtain the characteristic of pheromonal communication like their relative, the elephant. Some scientists (Rathbun, Reid, Bonde, & Powell, 1995) have observed that manatees form long periods of mating herds when wandering males come across estrous females, which indicates the possibility that males are able to sense the estrogen or other chemical indicators.[17][18] Manatees also eat other manatees' feces; it is assumed that they do this to gather information about reproductive status or dominance indicating the important role chemoreception plays in the social and reproductive behavior of manatees.[17]

Manatees feed on about 60 plant species, which include sea grasses as their major food source. They also consume some fish and small invertebrates. While many manatees are known to eat a large quantity throughout the day, the amount they eat depends on their body size and activity level.[19] Because manatees feed on abrasive plants, their molars are often worn down and are continually replaced throughout their life, so they are called "marching molars".

The West Indian manatee has a high casualty rate due to thermal shock from cold temperatures. During cold weather, many die due to their digestive tracts shutting down at water temperatures below 68 °F (20 °C). Many manatee deaths are caused by both large and small boats, mostly from their propellers. Manatees are also at a disadvantage because they are not able to quickly move away from an oncoming boat.[20] 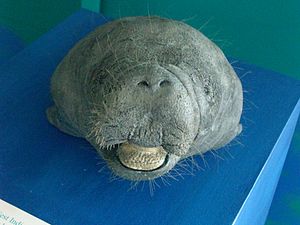 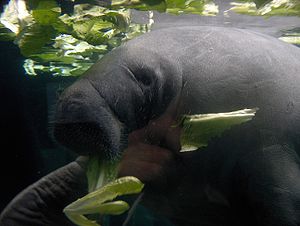 All the hairs of the manatee may be vibrissae

Manatees have sensitive tactile hairs that cover their bodies and faces called vibrissae. Each individual hair is a vibrissal apparatus known as a follicle-sinus complex. Vibrissae are blood filled sinuses bound by a dense connective tissue capsule with sensitive nerve endings that provides haptic feedback to the manatee.[21]

Usually vibrissae are found on the facial regions of terrestrial and non-sirenian aquatic animals and are called whiskers. Manatees, however, have vibrissae all over their bodies. The vibrissae located in their facial region are roughly 30 times denser than the vibrissae on the rest of their body. Their mouth consists of very mobile prehensile lips which are used for grasping food and objects. The vibrissae on these lips are turned outward during grasping and are used in locating vegetation. Their oral disks also contain vibrissae which have been classified as bristle-like hairs that are used in nongrasping investigation of objects and food.[22][23]

Although female West Indian manatees are mostly solitary creatures, they form mating herds while in estrus. Most females first breed successfully between ages of seven and nine; they are, however, capable of reproduction as early as four years of age. Most males reach sexually maturity by the time they are three or four.[24] The gestation period is 12 to 14 months. Normally, one calf is born, although on rare occasions two have been recorded. The young are born with molars, allowing them to consume sea grass within the first three weeks of birth. On average, manatees that survive to adulthood will have between five and seven offspring between the ages of 20 and 26. When a calf is born, it usually weighs between 60 and 70 pounds and is between 4.0 and 4.5 feet long. The family unit consists of mother and calf, which remain together for up to two years. Males aggregate in mating herds around a female when she is ready to mate, but contribute no parental care to the calf. 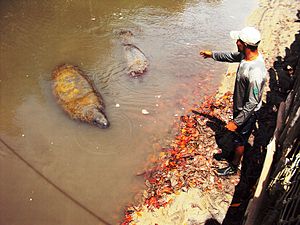 Manatees in a conservation project in Brazilian northeastern coast

The West Indian manatee has been hunted for hundreds of years for meat and hide, and continues to be hunted in Central and South America. Illegal poaching, as well as collisions with vessels, are a constant source of manatee fatalities. Additionally, environmental stresses such as red tide and cold waters cause several health problems to manatees such as immunosuppression, disease, and even death.[25] One conservation strategy in maintaining viable population size is manatee rehabilitation. According to The Society for Conservation Biology (2010) the four goals of manatee conservation include conservation science, conservation management, education, and policy.[26] Thirty-eight percent of manatee deaths, between the years 1995 and 2005, were caused by human-induced activities such as boats, water control devices, fishing equipment, and toxic chemicals;[27] therefore, conservation strategies involving effective public education programs and public policy enforcement are useful to manage these anthropogenic-induced fatal tragedies. Researchers strongly suggest that manatees' oral temperature, heart rate, and respiration rate should be strongly monitored during all human interventions such as field research, rescue, and captivity. Additionally, since studies have shown that death does not appear to be a common result of capture, it is believed that capture and care is necessary for manatees inhabiting Florida, Puerto Rico, and Belize.[26]

The Florida manatee subspecies (T. m. latirostris) was listed in October 2007 as endangered by the International Union for the Conservation of Nature (IUCN) on the basis of a population size of less than 2,500 mature individuals and a population estimated to be in decline by at least 20% over the next two generations (estimated at about 40 years) due to anticipated future changes in warm-water habitat and threats from increasing watercraft traffic over the next several decades.[28] 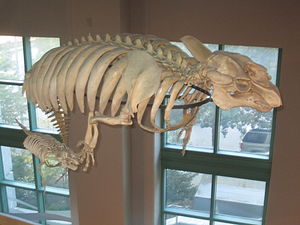 According to the US Fish & Wildlife Service (FWS) and the Florida Fish & Wildlife Conservation Commission, the IUCN "endangered" category is equivalent to the US Endangered Species Act (ESA) category of "threatened." Currently (2013), the manatee is listed under the ESA as "endangered," which is equivalent to the IUCN category of "critically endangered." [29] In April 2007, the US Fish and Wildlife Service advised the species be reclassified as threatened rather than endangered. The Florida Fish & Wildlife Conservation Commission no longer includes the manatee on its list of state imperiled species.[30]

Agencies responsible for administering the US Endangered Species Act are obliged to provide updates every five years. The most recent (2013) updates to the Manatee Core Biological Model, and a related manatee threats analysis, both prepared by the US Geological Service for the US Fish & Wildlife Service, represented a significant improvement in data collection and analysis.[31] The models project that the possibility of "virtual extinction"—fewer than 500 adult manatees—for the maximum 150-year period studied, is almost nil (less than one percent). According to the Core Biological Model, manatee populations are growing at a healthy rate throughout the state of Florida.

The Florida manatee is a tropical species unable to tolerate water temperatures below 20 °C (68 °F).[32] During the winter months, over 300 manatees often congregate near the warm water outflows of power plants along the coast of Florida instead of migrating south as they once did, causing some conservationists to worry that manatees have become too reliant on these artificially warmed areas.[33][34] According to the Florida Fish and Wildlife Conservations Commission (2010), a recorded 237 manatees died that year with 42% of those fatalities being a result of cold stress syndrome.[17] The US Fish and Wildlife Service is trying to find a new way to heat the water for manatees that are dependent on plants that have closed. According to Alvarez-Aleman et al. (2010), the first known Florida manatee was recorded utilizing the warm waters expelled by a power plant canal in Cuba in July 2006 and the following year in January, February, and April, a mother manatee and her calf were reported at the power plant in Havana, Cuba.[34] Manatees receive protection from the US Endangered Species Act of 1973, and the US Marine Mammal Protection Act of 1972. The West Indian manatee is also protected by the Florida Manatee Sanctuary Act of 1978.