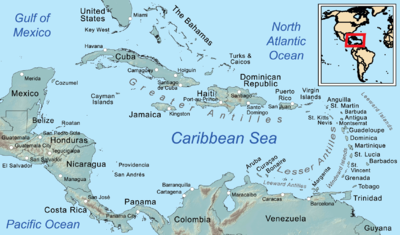 Political map of the West Indies.

The West Indies is a region of the Caribbean Basin and North Atlantic Ocean that includes the many islands and island nations of the Greater Antilles, Lesser Antilles and Lucayan Archipelago.[1]

After the first of the voyages of Christopher Columbus to the Americas, Europeans began to use the term West Indies to distinguish that region from the East Indies (South Asia and Southeast Asia).

Main article: History of the Caribbean

Between 1958 and 1962, the United Kingdom reorganised all their West Indies island territories (except the British Virgin Islands and the Bahamas) into the West Indies Federation. They hoped that the Federation would coalesce into a single, independent nation. However, the Federation had limited powers, numerous practical problems, and a lack of popular support; consequently, it was dissolved by the British in 1963, with nine provinces becoming independent sovereign states and four becoming British Overseas Territories.

West Indian is the official term used by the U.S. government to refer to people of the West Indies[2] 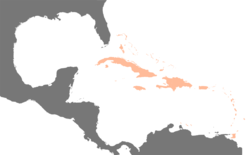 The West Indies in relation to North and South America

Tulane University professor Rosanne Adderly says "[T]he phrase 'West Indies' distinguished the territories encountered by Columbus and claimed by Spain from discovery claims by other powers in [Asia's] 'East Indies'. … The term 'West Indies' was eventually used by all European nations to describe their own acquired territories in the Americas. … considering British Caribbean colonies collectively as the 'West Indies' had its greatest political importance in the 1950s with the movement to create a federation of those colonies that could ultimately become an independent nation... Despite the collapse of the Federation [in the early 1960s]… the West Indies continues to field a joint cricket team for international competition."[3]

The member states of the West Indies cricket team also include Guyana, which is in South America.