Originally known as Skelmersdale & Ormskirk College, the college was originally an independently controlled institution, but was taken over by Newcastle College in 2007.[1]

In August 2011, the college changed its name to West Lancashire College.[2] The following month the college moved to a new £42.8 million campus, based near to its old demolished Northway Campus in Skelmersdale.

The college currently offers a range of courses to students from the local area. These courses include Diplomas, NVQs, Apprenticeships, Access courses, and as of 2012, A-Levels. Additionally, the college also offers a range of Higher Education Foundation Degree courses.

The new campus of the college contains facilities that replicate real life working environments for students to learn in. These specialised business units include hairdressing salons and a bistro, and are open to the public. 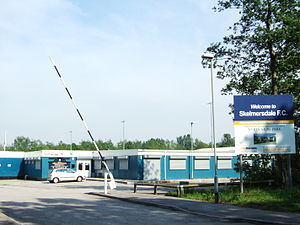 Located at Selby Place on the Skelmersdale, the football stadium caters for both college needs, as well as being the home for Skelmersdale United. It was the home of Liverpool Ladies F.C. until the end of the 2012 season. The stadium has a capacity of 2,500.[3]