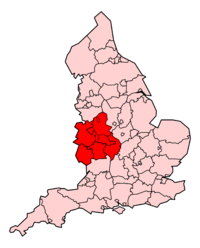 The West Midlands Ambulance Service NHS Foundation Trust (WMAS) is the second-largest ambulance service in the UK. It is the authority responsible for providing NHS ambulance services in Herefordshire, Shropshire, Staffordshire, Warwickshire, West Midlands and Worcestershire. The trust won the contract for non-emergency patient transport services in Cheshire, Warrington and Wirral previously provided by the North West Ambulance Service in 2015. It will transfer in July 2016.[1]

It is one of 10 Ambulance Trusts providing England with Emergency medical services, and is part of the National Health Service. There is no charge to patients for use of the service

WMAS is one of the highest performing ambulance services in England and was one of only two to exceed all of its national performance targets in 2006-07. WMAS employs around 4,500 staff and is supported by about 1,000 volunteers, over 63 sites, and makes over 450,000 emergency responses every year.[2]

Following the merger of the trusts, WMAS inherited a number of standalone control rooms. This resulted in 5 EOCs spread across the region operating independently using varying levels of technology at the following sites:[6]

On 28 November 2007, the Trust agreed to go ahead with proposals for the reconfiguration of its Emergency Operations Centres, despite vocal protests from the public. WMAS now only operates from 2 EOCs based at: Millenium Point, Brierley Hill (Trust HQ) Tollgate Drive, Stafford

The trust also operates a virtual EOC so waiting calls at either of the Trusts 2 EOCs can be answered by either EOC even if the call isn't designated to that control, increasing the speed response vehicles can be dispatched

In times of emergency, WMAS also requests assistance from voluntary ambulance providers, such as St John Ambulance.[8] St John Ambulance (SJA) also provides 'A&E Support' crews at times when there is a high level of staff absence or there is an unusually high call volume. This arrangement sees SJA crews attending Emergency or Non-Emergency calls. SJA crews may treat and transport certain categories of patient, although they are expected to ask for further assistance for more serious patients.

In times of severe weather, WMAS also has the ability to call on the Severn Area Rescue Association who have 4x4 ambulances.[9]

In 2011, a new system was announced for the operations of ambulance services in Herefordshire, whereby Hereford would serve as the 24-hour "hub" where all vehicles would be serviced, maintained and held before all shifts.[10] Stations include:

Henrietta street As of the last quarter of 2013 The Birmingham area moved to Aston Fire Station as a temporary move while it awaits confirmation of a new City Centre site amalgamating with West Midlands Fire Service into a City Centre "Emergency Services Hub" Other small stations moved into 2 main "Hubs" which forms a make ready system where ambulances are prepared prior to crew shift time commencement.

With Response cars based at CAS (community ambulance stations)