The West Midlands conurbation is the large conurbation that includes the cities of Birmingham and Wolverhampton and the large towns of Sutton Coldfield, Dudley, Walsall, West Bromwich, Solihull, Stourbridge and Halesowen in the English West Midlands.

According to the 2011 Census the area had a population of 2,440,986,[1] making it the third most populated in the United Kingdom behind the Greater London and Greater Manchester Built Up Areas.

The conurbation is polycentric - Birmingham and Wolverhampton have separate Eurostat Larger Urban Zones, and there are separate Travel to Work areas defined for Birmingham, Wolverhampton, Dudley & Sandwell and Walsall & Cannock; whilst the extreme south-west corner of the conurbation at Hagley is within the Kidderminster Travel to Work Area, and the extreme south-east corner is within the Warwick & Stratford upon Avon TTWA. 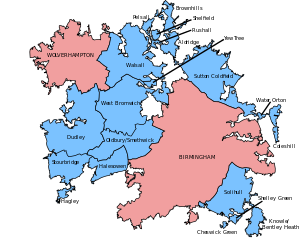 The West Midlands Urban Area as at the 2001 Census

Although the exact boundaries of any conurbation are open to debate, dependent on what criteria are used to determine where an urban area ceases, the Office for National Statistics defines the West Midlands Built Up Area as including the urban areas of Birmingham, Wolverhampton, Solihull, West Bromwich, Dudley, and Walsall amongst others. It should be noted that these settlements are not coterminous with the Metropolitan Boroughs of the same name.

The area of conurbation between Birmingham and Wolverhampton is known as the Black Country. The Black Country has no single centre, having grown up from a number of historic market towns and industrial villages that coalesced during the 20th century. It remains essentially polycentric with many of the towns and villages remaining recognisable communities.

Coventry is separated from the West Midlands conurbation by the Meriden Gap, and other urban areas, such as Cannock and Codsall are also only narrowly avoided. 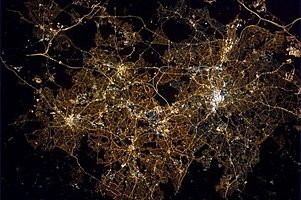 West Midlands conurbation at night from the ISS.

Occasionally the conurbation is seen as being coterminous with the West Midlands Metropolitan county; however, this includes Coventry, which is separate from the main urban area, and excludes the parts of the surrounding counties of Staffordshire, Warwickshire and Worcestershire that fall within the conurbation.

For administrative purposes, the vast majority of the conurbation falls within the six Metropolitan Boroughs of Birmingham, Dudley, Sandwell, Solihull, Walsall and Wolverhampton.

Two Local enterprise partnerships (LEPs) cover the majority of the conurbation area: Black Country LEP comprises the local authorities of Dudley, Sandwell, Walsall and Wolverhampton while the Greater Birmingham & Solihull LEP includes those two authorities and a number of satellite boroughs, many remote from the conurbation and not traditionally associated with it (Bromsgrove, Cannock Chase, East Staffordshire, Lichfield, Redditch, Tamworth and Wyre Forest).

The West Midlands Built Up Area consists of the below settlements. Due to the change in methodology between the 2001 and 2011 Census, and the amount of change between 2011 Census and previous census data, it is impossible to compare the data directly between 2011 and earlier Censuses.

In the 2011 Census, Coleshill and Water Orton are two separate built-up areas with populations of 6,341 and 3,444 respectively. Prior to 2011, they were considered part of the West Midlands Urban Area.

Prior to the 2011 census, the conurbation was known by the ONS as the West Midlands Urban Area, which contained the following Urban Sub-Divisions: