From Infogalactic: the planetary knowledge core
Jump to: navigation, search
For the town in South Africa, see Somerset West.

West Somerset is a local government district in the English county of Somerset. The council covers a largely rural area, with a population of 35,075[1] in an area of 740 square kilometres (290 sq mi);[2] it is the least populous non-unitary district in England. According to figures released by the Office for National Statistics in 2009, the population of West Somerset has the oldest average age in the United Kingdom at 52.[3] The largest centres of population are the coastal towns of Minehead (population 10,000) and Watchet (4,400).

The council's administrative headquarters is located in the village of Williton, with an additional office in Minehead.

The district was formed on 1 April 1974, under the Local Government Act 1972, by a merger of the previous urban districts of Minehead and Watchet, along with Dulverton Rural District and Williton Rural District.

There are 33 Grade I listed buildings in West Somerset, the oldest being Culbone Church, which is one of the smallest churches in England,[4] and pre-Norman in origin[5] and Tarr Steps which may originate in the Bronze Age, although others date them from around 1400.[6] Dunster has the greatest concentration of Grade I listed buildings including Dunster Castle, the Yarn Market, Gallox Bridge and Priory Church of St George. Other sites include manor houses such as Nettlecombe Court and Orchard Wyndham. The most recent buildings included in the list are Crowcombe Court which was completed in 1739[7] and the Church of St John the Baptist in Carhampton which was rebuilt in 1863.[8] There are numerous religious structures in Somerset, with the largest number being Anglican parish churches, dating from Norman or medieval eras. Some of the churches are included in the Somerset towers, a collection of distinctive, mostly spireless Gothic church towers. 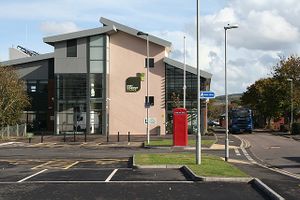 In 2012 financial difficulties at the council, including a £1 million reduction over three years, lead to plans to outsource most of the services provided to the population and make most of the staff redundant.[9] It is proposed that some services may be shared with Taunton Deane council.[10] In December 2012 the grant received from central government was increased by 0.9% meaning the council had £3.8million to spend on the provision of services.[11]

West Somerset benefits from one of the most scenic landscapes in England. Nearly two thirds of the western land area of the district forms part of Exmoor National Park designated in 1954 while on the eastern edge of the district are the Quantock Hills which, in 1956, became the first Area of Outstanding Natural Beauty created in the UK. Large areas of Exmoor and the Quantock Hills are also designated as Sites of Special Scientific Interest because of their value for wildlife.

The West Somerset Railway runs through most of the district, from Bishop's Lydeard in the south east, to Minehead in the north west. Operated mainly as a tourist attraction, the railway runs mostly steam and some diesel locomotives.

County schools (those which are not independent) in the five non-metropolitan districts of the county are operated by Somerset County Council.