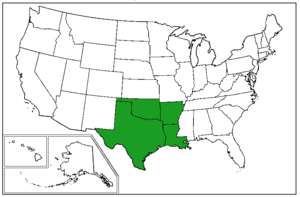 A map of the United States Census Bureau Region 3, Division 7, "West South Central", consisting of the states of Arkansas, Louisiana, Oklahoma, and Texas.

Four states compose the division: Arkansas, Louisiana, Oklahoma, and the state that dominates the region, Texas, which contains around 80% of the population of the entire region, and is larger in area than the three others combined. The division is one of the three that together make up the broader Census Bureau Region known as the South (the other two being the South Atlantic States and the East South Central States).[1]