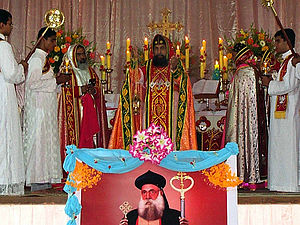 The West Syrian Rite, also known as the Syrian Rite or the Syro-Antiochene Rite, is a Christian liturgical rite chiefly practiced in the Syriac Orthodox Church and churches related to or descended from it. It is part of the liturgical family known as the Antiochene Rite, which originated in the ancient Patriarchate of Antioch. The rite was largely an adaptation of the old Greek liturgy of Antioch into Syriac, the language more common in the Syrian countryside. Into this framework a great number of other anaphoras have been adapted, so that the West Syrian Rite has more variant forms than any other.

The oldest known form of the Antiochene Rite is in Greek which is apparently its original language. The many Greek terms that remain in the Syriac form show that this is derived from Greek. The version must have been made very early, evidently before the schism occasioned by the Council of Chalcedon, before the influence of Constantinople had begun. No doubt as soon as Christian communities arose in the rural areas of Roman Syria, the prayers which in the cities (Antioch, Jerusalem, etc.) were said in Greek, were, as a matter of course, translated into the peasants' language (Syriac) for their use.

Early sources, such as Peregrinatio Silviae describe the services at Jerusalem as being in Greek; but the lessons, first read in Greek, are then translated into Syriac. As long as all Western Syria was one communion, the country dioceses followed the rite of the patriarch at Antioch, only changing the language. Modifications adopted at Antioch in Greek were copied in Syriac by those who said their prayers in the national tongue. This point is important because the Syriac Liturgy (in its fundamental form) already contains all the changes brought to Antioch from Jerusalem. It is not the older pure Antiochene Rite, but the later Rite of Jerusalem-Antioch. The Liturgy of St. James, for example, prays first not for the Church of Antioch, but "for the holy Sion, the mother of all churches", that is, Jerusalem. (Brightman, pp. 89–90). The fact that both the Syriac and the Byzantine Orthodox Churches have the Jerusalem-Antiochene Liturgy is the chief proof that this had supplanted the older Antiochene use before the schism of the 5th century.

The earliest extant Syriac documents come from about the end of the 5th century.[1] They contain valuable information about local forms of the Rite of Antioch-Jerusalem. The Syriac Orthodox Church kept a version of this rite which is obviously a local variant. Its scheme and most of its prayers correspond to those of the Greek St. James; but it has amplifications and omissions such as is found in all local forms of early rites. It seems too that the Syriac Church made some modifications after the schism. This is certainly the case at one point, that of the Trisagion.

One Syriac writer is James of Edessa (d. 708), who wrote a letter to a priest Thomas comparing the Syrian Liturgy with that of Egypt. This letter is an exceedingly valuable and really critical discussion of the rite. A number of later Syriac writers followed James of Edessa. On the whole this church produced the first scientific students of liturgy. Benjamin of Edessa (period unknown), Lazarus bar Sabhetha of Bagdad (ninth century), Moses bar Kephas of Mosul (d. 903), Dionysuis bar Salibhi of Amida (d. 1171) wrote valuable commentaries on this Rite. In the eighth and ninth centuries a controversy concerning the prayer at the Fraction produced much liturgical literature. The chronicle of a Syriac prelate, Patriarch Michael the Great, (d. 1199) discusses the question and supplies valuable contemporary documents.

The oldest West Syriac liturgy extant is the one ascribed, as in its Greek form, to Saint James, "the brother of the Lord". It is in the dialect of Edessa. The pro-anaphoral part of this is the Ordo communis to which the other later Anaphoras are joined.

This follows the Greek St. James with these differences:

To the Ordo communis, the Syriac Church has added a very great number of alternative Anaphoras, many of which have not been published. These Anaphoras are ascribed to all manner of people; they were composed at very different periods. One explanation of their attribution to various saints is that they were originally used on their feasts.

Eusèbe Renaudot translated and published 39 of these. After that, the Liturgy of St. James follows (in his work) a shortened form of the same. This is the one commonly used today. Then:

Brightman (pp. lviii–lix) mentions 64 Liturgies as known, at least by name. Notes of this bewildering number of Anaphoras will be found after each in Renaudot. In most cases all he can say is that he knows nothing of the real author; often the names affixed are otherwise unknown. Many Anaphoras are obviously quite late, inflated with long prayers and rhetorical, expressions, many contain miaphysite ideas, some are insufficient at the consecration so as to be invalid. Baumstark (Die Messe im Morgenland, 44–46) thinks the Anaphora of St. Ignatius most important, as containing parts of the old pure Antiochene Rite. He considers that many attributions to later miaphysite authors may be correct, that the Liturgy of Ignatius of Antioch (Joseph Ibn Wahib; d. 1304) is the latest. Most of these Anaphoras have now fallen into disuse.

There is an Armenian version (shortened) of the Syriac St. James. The Liturgy is said in Syriac with (since the 15th century) many Arabic substitutions in the lessons and proanaphoral prayers. The Lectionary and Diaconicum have not been published and are badly known. The vestments correspond almost exactly to those of the Byzantine Orthodox, except that the bishop wears a Latinized mitre. The Calendar has few feasts. It follows in its main lines the older form of Antioch, observed also by the Nestorians, which is the basis of the Byzantine Calendar. Feasts are divided into three classes of dignity. Wednesday and Friday are fast-days. The Divine Office consists of Vespers, Compline, Nocturns, Lauds, Terce, Sext, and None, or rather of hours that correspond to these among Latins. Vespers always belongs to the following day. The great part of this consists of long poems composed for the purpose, like the Byzantine odes. Baptism is performed by immersion; the priest confirms at once with chrism blessed by the patriarch. Communion is administered under both kinds; the sick are anointed with oil blessed by a priest — the ideal is to have seven priests to administer it. The orders are bishop, priest, deacon, subdeacon, lector, and singer. There are many chorepiscopi, not ordained bishop. It will be seen, then, that the relatively small Syriac Church has followed much the same line of development in its rites as its Byzantine neighbours.

The Syrian Catholics, that is, those in communion with Rome, use the same rite as the Syriac Orthodox, but perhaps in a more organized manner. There is not much that can be called Romanizing in their books; but they have the advantage of well-arranged, well-edited, and well-printed books. The most prominent early modern and modern students of the West Syrian Rite (the Assemani, Renaudot, etc.) have been Catholic. Their knowledge and Western standards of scholarship in general are advantages from which the Syrian Catholics profit. Of the manifold Syrian Anaphoras, the Catholics use seven only — those of St. James, St.John, St. Peter, St. Chrysostom, St. Xystus, St. Mathew, and St. Basil. That of St. Xystus is attached to the Ordo communis in their official book; that of St. John is said on the chief feasts. The lessons only are in Arabic. It was inevitable that the Syrian Liturgies, coming from miaphysite sources, should be examined at Rome before they are allowed to Syrian Catholics, but the revisers made very few changes. Out of the mass of anaphoras they chose those believed to be the oldest and purest, leaving out the long series of later ones that they regarded as unorthodox, or even invalid. In the seven kept for Syrian Catholic use what alterations have been made are chiefly the omission of redundant prayers, and the simplication of confused parts in which the Diaconicum and the Euchologion had become mixed together. The only substantive change is the omission of the clause: "Who was crucified for us" in the Trisagion. There is no suspicion of modifying in the direction of the Roman Rite. The other books of the Catholics — Diaconicum, officebook, and ritual — are edited at Rome, Beirut, and the Patriarchal press Sharfé; they are considerably the most accessible, the best-arranged books in which to study this rite.