The first public television station in West Virginia signed on July 14, 1969 under the callsign WMUL-TV, broadcasting from Marshall University. In 1981 WMUL-TV changed its call letters to WPBY-TV;[2] two years later, the public station at West Virginia University, WWVU-TV, was renamed WNPB-TV.[3] WPBY-TV and WNPB-TV received their new call letters to underline that the operations were managed by the state educational broadcasting authority, and not the university system. In 1992 the state completed a microwave link that permitted it to convert WNPB and the state's third PBS station, WSWP-TV in Beckley, West Virginia to become repeaters of WPBY-TV in Huntington and form a state network. On January 5, 2015, WPBY-TV changed its call letters to WVPB-TV[2] as part of an effort to unify all of West Virginia Public Broadcasting's services under a single brand; the television network had previously been branded as "West Virginia PBS," a name that was phased out starting on January 1, 2015.[4]

The state network has a total of eight low-powered repeaters serving other areas out of the range of the three full-powered stations, most notably Wheeling and Parkersburg. In the past the network showed some Marshall University and West Virginia University sports content, but has abandoned this practice due to Conference USA/Big 12 exclusivity agreements with commercial and cable outlets.

Two translators that repeated WSWP-TV have not yet been converted to digital.[which?]

All digital signals are multiplexed:

West Virginia Public Broadcasting's stations shut down their analog signals on June 12, 2009, the official date in which full-power television stations in the United States transitioned from analog to digital broadcasts under federal mandate. The station's digital channel allocations post-transition are as follows:[8] 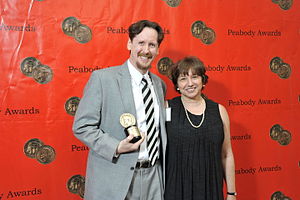 Trey Kay and Deborah George at the 69th Annual Peabody Awards for The Great Textbook War, broadcast on WVPB

WVPB's state radio network includes eleven full-powered stations and seven low-powered translators, all on the FM band. The state network carries programs from NPR, PRI and other distributors, as well as classical and folk music. WVPB produces original weekly programs, including EclecTopia, Inside Appalachia and Sidetracks, plus the nationally distributed Mountain Stage (for NPR and the Voice of America). The network was known as "West Virginia Public Radio" until WVPB's 2015 transition to a single brand.[4]

The West Virginia Educational Broadcasting Authority has two construction permits for two digital low-powered translators for WSWP-TV of which these digital translators may not be on the air yet.[15][16]

West Virginia Public Broadcasting maintains a website with West Virginia news and free access to original video and audio productions. It also provides its videos through its YouTube page.