West Yorkshire Police is the territorial police force responsible for policing West Yorkshire in England. It is the fourth largest force in England and Wales by number of officers, with 5671 officers.

File:WYMP.JPG
A sign found outside a building in Wakefield showing the 'Metropolitan' in the force name

Proposals made by the Home Secretary on 21 March 2006 would see the force merge with North Yorkshire Police, South Yorkshire Police and Humberside Police to form a strategic police force for the entire region. These plans are currently under review and not expected to take place in the foreseeable future.

On 12 December 2006, Sir Norman Bettison was announced as the new Chief Constable, replacing Colin Cramphorn and resigned from his post on 24 October 2012. He was replaced by Temporary Chief Constable John Parkinson until the appointment of Mark Gilmore as Chief Constable on 1 February 2013. West Yorkshire Police is reported to have had £6.3 million invested in failed Icelandic financial institutions.[citation needed]

For operational purposes West Yorkshire Police is divided into five geographic divisions known within the force as ‘policing districts’. The change in nomenclature reflects that of April 2014 the alignment with council boundaries for policing districts and the reduction of divisions in Leeds (which had three) and Bradford (which had two) so that each policing district was conterminous with its respective local authority boundaries. Each district is made up of Partnership Working Areas (PWA) which consist of an Inspector and three teams of sergeants, police constables, special constables and PCSOs. The first single police commander of the Bradford district, Chief Superintendent Simon Atkin, was appointed in October 2013 as part of ongoing moves to merge the district’s two policing divisions, while Chief Superintendent Angela Williams was appointed in Calderdale.[5] 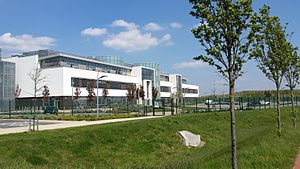 The force headquarters is situated on Laburnum Road to the north of Wakefield city centre along with the Learning and Development Centre and specialist operations facility at Carr Gate, Wakefield at Junction 41 of the M1 motorway. 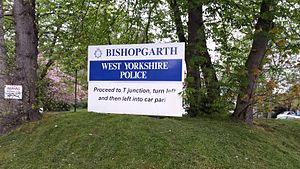 Wakefield District police headquarters is now located on Havertop Lane, Normanton. The total area is 11,500 metres squared and provides office accommodation as well as a 35-cell custody suite.[3] As it's now operational, the following Police stations are in the process of being closed and/or sold.

The new headquarters for the newly formed Leeds District is operational on Elland Road, Beeston, Leeds. The total area is 12,500 metres squared and provides office accommodation as well as a 40-cell custody suite.[3] Now operational, the Leeds District HQ will replace the following stations:

The existing Operational Support facilities at Carr Gate, Wakefield have been expanded and new buildings constructed which has centralised specialist training for the force in one location. The new facility, which totals 20,000 metres squared includes the following:

From the mid-1990s, there were seventeen geographical divisions within West Yorkshire Police;[27] however from 2000 onwards the number of divisions decreased as the move towards aligning police divisions with local council wards was implemented.

The Police Memorial Trust lists and commemorates all British police officers killed in the line of duty, and since its establishment in 1984 has erected over 38 memorials to some of those officers.

Since 1900 the following officers of West Yorkshire Police are listed by the Trust as having died during the course of their duties in attempting to prevent, stop or solve a criminal act:[48]