From Infogalactic: the planetary knowledge core
Jump to: navigation, search
This article is about the historical region. For the Armenian dialect, see Western Armenian. 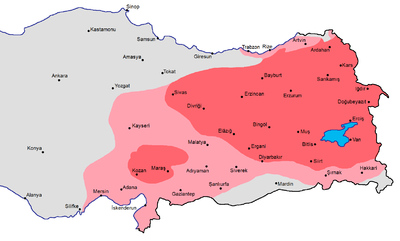 The distribution of Armenians in the early 17th century, a few decades after its conquest by the Ottomans, within the current borders of Turkey:[1]
Armenian majority
Significant Armenian presence

The area, formerly known as Turkish Armenia or Ottoman Armenia, was conquered by the Ottomans in the 16th century during the Ottoman–Safavid War (1532–1555) against their Iranian Safavid arch-rivals. Being passed on from the former to the latter, Ottoman rule over the region became only decisive after the Ottoman–Safavid War of 1623–1639.[3] During the 19th century, the Russian Empire conquered all of Eastern Armenia from Iran,[4] and also some parts of Turkish Armenia, such as Kars. The region's Armenian population was affected during the widespread massacres of Armenians in the 1890s.

The Armenians living in their ancestral lands were exterminated or deported during the Armenian Genocide in 1915 and the following years. The over two thousand year[5][6] Armenian presence in the area largely ended and the cultural heritage was mainly destroyed by the then Ottoman government.[7][8]

Only assimilated and crypto-Armenians live in the area today, and some irredentist Armenians claim it as part of United Armenia. The most notable political party with these views is the Armenian Revolutionary Federation. 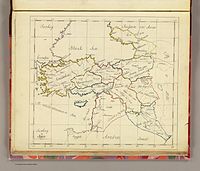 In Armenian, there are several names for the region. Today, the most common is Արևմտյան Հայաստան Arevmtyan Hayastan in Eastern Armenian (mostly spoken in Armenia, Russia, Georgia, Iran) and Արեւմտեան Հայաստան Arevmdean Hayasdan in Western Armenian (spoken in the Diaspora: US, France, Lebanon, Syria, Argentina, etc.). Archaic names (used before the 1920s) include Տաճկահայաստան Tačkahayastan in Eastern and Daǰkahayasdan in Western Armenian. Also used in the same period were Թուրքահայաստան T'urk'ahayastan or Թրքահայաստան T'rk'ahayastan, both meaning Turkish Armenia.

In Turkish, the literal translation of Western Armenia is Batı Ermenistan, but the region is referred to as Doğu Anadolu (Eastern Anatolia), one of the seven geographical regions of Turkey, despite not being part of Anatolia.

The Kurds refer to the region as Bakurê Kurdistanê (Northern Kurdistan).

The Six Armenian vilayets (provinces) of the Ottoman Empire were defined as Western Armenia.

The fate of Western Armenia — commonly referred to as "The Armenian Question" — is considered a key issue in the modern history of the Armenian people.[12]

World War I and later years

During the collapse of the Ottoman Empire Western Armenia remained under Turkish rule, and in 1894–96 and 1915 the Ottoman Empire perpetrated systematic massacres and forced deportations of Armenians[13] resulting in the Armenian Genocide. The massive deportation and killings of Armenians began in the spring 1915. On April 24, 1915 Armenian intellectuals and community leaders were deported from Constantinople. Depending on the sources cited, about 1,500,000 Armenians were killed during this act.

During the Caucasus Campaign of World War I, the Russian Empire occupied most of the Armenian-populated regions of the Ottoman Empire. A temporary provincial government was established in occupied areas between 1915 and 1918.

The chaos caused by the Russian Revolution of 1917 put a stop to all Russian military operations and Russian forces began to conduct withdrawals. The first and second congresses of Western Armenians took place in Yerevan in 1917 and 1919.

The modern concept of United Armenia as used by the Armenian Revolutionary Federation (Dashnaktsutyun).

Since 2000, an organizing committee of the congress of heirs of Western Armenians who survived the Armenian Genocide is active in diasporan communities.[14]