The Western Army Infantry Regiment (西部方面普通科連隊 Seibu Hōmen Futsū-ka Rentai), is a (battalion sized) Japanese light infantry regiment that specializes in amphibious operations. Its main purpose is to defend remote islands in Japanese territorial waters,[2] specifically to the Kyushu region, including Okinawa.[3] The regiment is based at Sasebo in Nagasaki.[3][4]

File:A member of the Japanese Ground Self-Defense Force, foreground, rests during a patrolling exercise at Marine Corps Base Camp Pendleton, Calif., June 12, 2013, during exercise Dawn Blitz 2013 130612-M-JU912-072.jpg
A WAIR soldier holds his binoculars while kneeling on the ground during a training mission with US Marines in Camp Pendleton.

The WAIR was created on March 27, 2002 in order to defend remote islands in the western part of Japan in case of an invasion or enemy attacks, although they are also mandated to assist in search and rescue efforts in case their assistance is needed.[2][5] It consists of Ranger-trained JGSDF soldiers and at the initial formation, it consisted of 600 soldiers.[3]

In August 2010, a proposal was being considered by the Japanese government to convert a conventional [battalion strength] regiment from either the 8th Division or the 15th Brigade into a "US-style" amphibious unit,[6][7] effectively giving the Western Army a battalion of marines for dealing with contingencies.

In 2013, troops from the Western Army Infantry Regiment deployed from the JS Hyuga and JS Shimokita for an amphibious warfare exercise in California.[8] 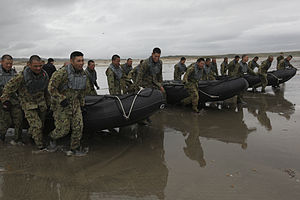 WAIR soldiers lift inflatable rafts during a training exercise alongside a US Marine, who is serving as their Japanese interpreter.

As of June 2013, as part of an ongoing expansion of defense capabilities in the Western Army's area of responsibility, the MOD were considering creating a special "isle assault unit", whose role would be the recapture of remote Japanese islands that had been invaded by a foreign power.[9] It would share this mission with the pre-existing Western Army Infantry Regiment, itself currently undergoing an expansion in manpower and equipment (e.g. increase in authorised strength to 680 effectives, & adding (initially 4) AAVP-7A1's to its TOE). Equipment for the new unit on the other hand, may ultimately include the Maneuver Combat Vehicle and the Light-weight Combat Vehicle (LCV) System alongside MV-22 Ospreys.[10]

Its growth is part of the National Defense Programme Guidelines that were adopted by the Japanese government in order to ascertain the JGSDF's capabilities in amphibious warfare in defending its islands in case of a future war involving Japan, which can bolster the Japanese-American military alliance.[11]

When stood up, the new unit together with the WAIR will form a major part of the Western Army's first response to a hostile incursion in the more remote parts of its AOR. In early September 2015, plans for the creation of the new unit, now referred to as an 'amphibious mobile unit'[12] were confirmed. The new unit is to be stood up by the end of FY2017, with a training corps to be set up in the interim (by the end of FY2016).

Potential recruits for WAIR must be Ranger-qualified before they are accepted.[5] Once in the unit, WAIR soldiers are trained in reconnaissance, survival skills and techniques.[5]

WAIR forces are equipped with light infantry weapons, including mortars and Japanese-made military trucks such as the Mitsubishi Type 73 Light Truck.[13]