From Infogalactic: the planetary knowledge core
Jump to: navigation, search
Not to be confused with Western world. 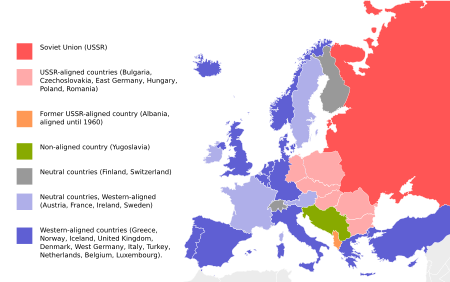 Political situation in Europe during the Cold War

The Western Bloc during the Cold War refers to the countries allied with the United States and NATO against the Soviet Union and the Warsaw Pact. The latter were referred to as the Eastern Bloc. The governments and press of the Western Bloc were more inclined to refer to themselves as the "Free World" or the "Western world", whereas the Eastern Bloc was often called the "Communist world".

During the Cold War the non-Communist countries in Europe were called "Western Europe", but within the framework of the modern times it is a purely geographical term.[citation needed]