Western Force is a rugby union team based in Perth, Western Australia playing in the international Super rugby competition. They first competed in the 2006 season and finished with the wooden spoon in that year, however their performances greatly improved in 2007. In 2008 they finished in 8th place, just missing out on the finals again. The team is the fourth Australian team to be accepted into the competition. It was coached by former New Zealand All Blacks coach, John Mitchell for the first five seasons before former Australian sevens captain Richard Graham took charge ahead of the 2011 season.

The bid for entry into an expanded Super 12 competition started in the early 2000s, when in 2002, a group was formed to oversee developments in the push for a new Australian franchise. The group's objective was to ensure that if SANZAR agreed to a fourth Australian franchise, that RugbyWA would be ready. RugbyWA were invited to bid for the fourth Australian team, and the union assembled a project team, which was given four weeks to formulate their bid. The bid was backed by the state government, which loaned more than one million dollars to RugbyWA, as well as committing $25 million towards an upgrade of the Members Equity Stadium. It was announced in December 2004 that RugbyWA had beaten Rugby Union Victoria for the right to host the fourth Australian franchise.

On 10 February the Western Force made their 2006 season rugby debut against the Brumbies at a near sold out Subiaco Oval in Perth, losing 25–10. Since this result, the Force have had a difficult debut in Super 14. A one-sided loss to the Hurricanes and an ugly loss at home to the Chiefs in Perth followed. Many fans were unimpressed, with only approximately 23,000 turning up to watch a match against the Bulls. On 31 March, in front of 24,000, the Force came closest to their first win, losing 26–25 to the Stormers at Subiaco Oval. This was after leading 10–0 early on in the match. This was the Force's first competition point ever, and is the longest it has ever taken a side to get a point in Super rugby history (8 rounds/7 matches). 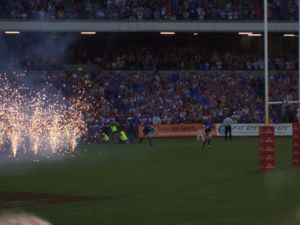 The Force run out in their first game against the Brumbies

On 21 April a crowd of 32,231[1] saw the Force nearly pull off the upset of the year, drawing 23-all with the undefeated defending champion Crusaders. Though the Force were leading 7–0 after several minutes the feeling was still that the Crusaders would win, especially after they scored a try seconds later to make it 7–5. Only when the Force had blown the score out to 17–5 did anyone begin to talk of an upset. Leading 20–8 at half time the Force did not hold on for the win after the Crusaders scored two tries and a penalty within the closing half. At 23-all with seconds left the Force crashed over the line but were denied by the television match official.

Two days after the draw with the Crusaders, the Force were able to sign rising star Matt Giteau from the Brumbies, effective with the 2007 season. Giteau, whose contract with the Brumbies ended after the 2006 season, inked a three-year deal reportedly worth A$4.5 million, making him the highest-paid player in the history of any Australian football code.[2]

On Saturday, 6 May, the Force announced they had managed to sign another player, Red's winger Drew Mitchell. However, during the same week the Force were fined $110,000 after an "independent committee found that Rugby WA had entered a negotiation process with Al Kanaar in a way that was contrary to and in breach of the contracting protocols."[3] The Force notched up their first win by defeating the Central Cheetahs 16–14 on 6 May.

On 19 April, RugbyWA unveiled the franchise team name as well as the logo, at a reception at the Burswood International Resort in Perth. Months of detailed community involvement went into selecting the name for the team. 'Western Force' was chosen as the name, which best reflected the franchise's location (state) and its 'values of strength, energy and community'. The logo was unveiled to be a black swan, which is the state's traditional insignia. The swan is set in a blue background, representing the Western Australia coastline and sky, whilst the gold represented the beaches, mineral wealth and sunshine. Some speculated that the team was going to be called the 'Black Swans'.

In July at function at the same venue as where the logo was unveiled to the public, the Force's jersey and naming rights sponsor was revealed. The home jersey was unveiled on Brendan Cannon, being blue with a black swan. Lachlan MacKay emerged with the side's alternate strip, which was gold with a black swan; black and gold being the State colours of Western Australia. The team's first jersey was auctioned off for $30,000, and the first alternate strip was then also auctioned off for $30,000 as well.

Shortly after RugbyWA won the fourth Australian franchise, an on-line register was set up for members to record their interest. In the space of weeks, 10,000 people had registered. When membership was officially launched in July, more than 13,000 were registered, with around 400 companies expressed interest in hospitality packages. Soon the Force had the largest membership base of any of the Australian Super 14 teams. By the time pre-season had started, the Force had 16,000 members.

Australian Rugby Union CEO Gary Flowers told the media that "people power" was a key factor in Western Australia being awarded the franchise ahead of Victoria. Prior to the announcement, more than 25,500 Western Australians signed a petition in support of their state's bid. In addition, 5,000 people, including the state's premier Dr Geoff Gallop, attended a rally at Subiaco Oval, organised by two rugby mothers "the Scrum Mums" (Jennifer Hoskins and Irma Cooper) to show how much the people of Western Australia wanted the franchise. By the end of the first season, the Force finished with the highest crowd average out of all the Australian teams, despite finishing in last place, the fans still came out to see Wallaby stars such as Matt Giteau, Drew Mitchell and Nathan Sharpe (though Mitchell and Giteau were not in the 2006 line-up).

The Force previously played all of their home games at Subiaco Oval. The stadium has a capacity of 43,500[4] and is configured in an oval shape for Australian Football.

The club moved into the 18,000 seat nib Stadium for the 2010 season. The reason for the move to the smaller venue is that it is a rectangular field, as opposed to the oval at Subiaco which is poor viewing for rugby fans. The Force, along with association football club Perth Glory are pushing for an upgrade to Members Equity Stadium, which would create a rectangular venue for the two clubs.[5] The Force were given a limited grant by the government to improve facilities at the stadium, and this saw its capacity increase to 20,500 in time for the 2010 Super Rugby Season.

Between 2010 and 2011 the State government developed a masterplan for an improved rectangular stadium and then completed a business case which saw $88million dollars allocated to the first stage which was to include a new permanent East stand, new lights, two video replay boards, LED signage at pitch level, replacement of the playing surface and replacement of the south scaffold stand with new scaffold. A Project Definition Plan was then completed and following this, the government allocated a further $7.14million to add corporate amenity including 48 corporate boxes and a 250-seat BBQ deck to the new Eastern stand.

In June 2012 builder BGC were awarded the head building contract for the project and on 7 June 2012 the Minister for Sport and Recreation Terry Waldron MLA announced that hard work by the project team, led by the Department of Sport and Recreation, and a keen price by builders would enable the south stand to become a permanent, unroofed structure rather than new scaffold. It was completed in September 2013, with a capacity of 20,441. 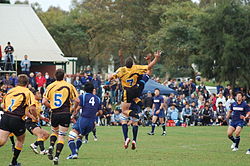 RugbyWA's two elite development squads just below full-time professional level are the Western Force A and WA Under 20 teams. These teams are closely aligned with the Western Force and train at McGillvray Oval, the training base used by the Force. RugbyWA also owns and manages a team in the National Rugby Championship. – See: Perth Spirit

The Western Force A team plays matches against interstate and international representative teams, and has also competed in tournaments such as the Pacific Rugby Cup. Teams known by various names over the years including Western Force A, Western Force Gold and Force Academy have been selected from the best emerging rugby talent in Western Australia. The current squad is a mix of Western Force contracted players, Force Academy players from elite youth programs, and selected Premier Grade club rugby players.[6]

In 2006 the Western Force Gold, playing in the traditional gold and black colours of Western Australia, undertook a two-week tour to South Africa. The team played the Golden Lions and Blue Bulls before returning home to Perth to play Manu Samoa and Japanese Top League teams Toshiba and Yamaha.[6] In 2008, the Force Academy beat the Singapore national side by 113–7.[7]

The Western Australia Under 20 team competes in the Southern States Championship and also plays occasional matches against other representative sides. Prior to 2008, state colts teams at under 21 and under 19 age levels were fielded in national competitions.

For player movements before and during the 2016 season, see List of 2015–16 Super Rugby transfers#Force.

Most points in a match

Most tries in a match

Most points in a season

Most tries in a season

In November 2007, Western Force players Scott Fava and Richard Brown were fined and ordered to do community service for mistreating protected native quokkas at a team bonding session on Rottnest Island, 19 kilometres (12 mi) off the coast of Perth.

Eye-witness accounts stated that the players had mishandled the animals, including trapping and throwing them, though none were known to be seriously injured. Alcohol was said to be a factor.

As a result of the actions, Australian Wallaby number 8 Fava was ordered to pay $11,000, attend a week of community service and undergo counselling for alcohol abuse, while flanker Richard Brown was sentenced to a $5000 fine as well as seven days' community service. Both fines were payable to the Rottnest Island Conservation Foundation.

In February 2008, Matt Henjak and Haig Sare were involved in a fight at a pub in Perth. Henjak hit Sare and broke his jaw and was sacked by the Force for misconduct. Haig Sare returned to play for the Force at the end of Season 2008 once his injuries healed.

Sponsorship payments from the fuel technology company Firepower were a major factor in luring Wallaby star Matt Giteau and others to play for the Western Force in Perth.[11] The luckless Giteau was one of a number of sportsmen owed millions of dollars after the collapse of Firepower.[12] A new consortium offered to cover the Firepower money if Giteau extended his existing contract,[13] however he chose not to, and returned to Canberra to play for the Brumbies.[14]