Western Thrace (Greek: [Δυτική] Θράκη, [Dytikí] Thráki, [ˈθraci]; Turkish: Batı Trakya; Bulgarian: Западна Тракия, Zapadna Trakiya or Беломорска Тракия, Belomorska Trakiya) is a geographic and historical region of Greece, located between the Nestos and Evros rivers in the northeast of the country. Together with the regions of Macedonia, Epirus and sometimes Thessaly, it is often referred to informally as northern Greece. It is also called Greek Thrace to distinguish it from Eastern Thrace, which lies east of the river Evros and forms the European part of Turkey, and the area to the north, in Bulgaria, known as Northern Thrace.

Inhabited since paleolithic times, it has been under the political, cultural and linguistic influence of the Greek world since the classical era;[2][3] Greeks from the Aegean islands extensively colonized the region (especially the coastal part) and built prosperous cities such as Abdera (home of Democritus, the 5th-century philosopher who developed an atomic particle theory, and of Protagoras, a leading sophist) and Sale (near present-day Alexandroupoli).[2] Under the Byzantine Empire, Western Thrace benefited from its position close to the imperial heartland and became a center of medieval Greek commerce and culture; later, under the Ottoman Empire, a number of Muslims settled there, marking the birth of the Muslim minority of Greece.

Topographically, Thrace alternates between mountain-enclosed basins of varying size and deeply cut river valleys. It is divided into the three regional units (former prefectures): Xanthi, Rhodope and Evros, which together with the Macedonian regional units of Drama, Kavala and Thasos form the East Macedonia and Thrace region.

The Fourth Army Corps of the Hellenic Army has its headquarters in Xanthi; in recent years, the region has attracted international media attention after becoming a key entering point for illegal immigrants trying to enter European Union territory; Greek security forces, working together with Frontex, are also extensively deployed in the Greek-Turkish border.

The approximate area of Western Thrace is 8,578 km² with a population of 371,208 according to the 2011 census.[1] More than two-thirds of the population are Orthodox Christian Greeks, while the remainder (approx. 120,000) are Muslims who are an officially recognised minority of Greece. Of these, about half are of Turkish origin, while another third are Pomaks who mainly inhabit the mountainous parts of the region. The Romani of Thrace are also mainly Muslim, unlike their ethnic kin in other parts of the country who generally profess the Orthodox faith of the Greek majority. Thrace is bordered by Bulgaria to the north, Turkey to the east, the Aegean Sea to the south and the Greek region of Macedonia to the west. Alexandroupoli is the largest city, with a municipal population of 72,959 according to the 2011 census.[1] Below is a table of the five largest Thracian cities:[1]

See also: History of Thrace, History of East Thrace, and Greece during World War I 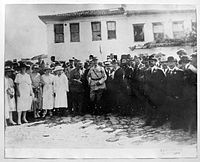 The Greek mission in Komotini after the incorporation of the area, 1920. 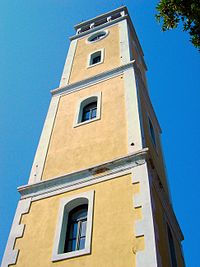 After the Roman conquest, Western Thrace further belonged to the Roman province of Thrace founded in 46 AD. At the beginning of the 2nd AD century Roman emperor Trajan founded here, as a part of the provincial policy, two cities of Greek type (i.e. city-states), Traianoupolis and Plotinopolis. From this region passed the famous via Egnatia, which ensured the communication between East and West, while its ramifications were connecting the Aegean world with Thracian hinterland (i.e. upper and middle valley of Evros river). From the coast also passed the sea route Troad–Macedonia, which had used the Apostle Paul in his journeys in Greece. During the great crisis of the Roman Empire in the 3rd AD century, Western Thrace often suffered from the frequent incursions of the barbarians till the reign of Diocletian, whenever it managed to prosper again thanks to its administrative reforms.[4]

The region had been under the rule of the Byzantine Empire from the time of the division of the Roman Empire into Eastern and Western empires in the early fourth century AD. The Ottoman Empire conquered most of the region in the 14th century and ruled it till the Balkan Wars of 1912–1913. During Ottoman rule, Thrace had a mixed population of Turks and Bulgarians, with a strong Greek element in the cities and the Aegean Sea littoral. A smaller number of Pomaks, Jews, Armenians and Romani also lived in the region. At 1821, several parts of Western Thrace, such as Lavara, Maroneia, and Samothraki rebelled, participated in the Greek War of Independence.

During the First Balkan War, the Balkan League (Serbia, Greece, Bulgaria and Montenegro) fought against the Ottoman Empire and annexed most of its European territory, including Thrace. Western Thrace was occupied by Bulgarian troops who defeated the Ottoman army. On November 15, 1912 on the right bank of the river Maritza Macedonian-Adrianopolitan Volunteer Corps captured the Turkish corps of Yaver Paha, which defends the Eastern Rhodopes and Western Thrace from invading Bulgarians.

The victors quickly fell into dispute on how to divide the newly conquered lands, resulting in the Second Balkan War. In August 1913 Bulgaria was defeated, but gained Western Thrace under the terms of the Treaty of Bucharest.

In the following years, the Central Powers (Germany, Austria-Hungary, Ottoman Empire) (with which Bulgaria had sided) lost World War I and as a result Western Thrace was withdrawn from Bulgaria under the terms of the 1919 Treaty of Neuilly.[5] Western Thrace was under temporary management of the Entente led by French General Charles Antoine Charpy. In the second half of April 1920 in San Remo conference of the prime ministers of the main allies of the Entente powers (except the US) Western Thrace was given to Greece.

Throughout the Balkan Wars and World War I, Bulgaria, Greece and Turkey each forced respective minority populations in the Thrace region out of areas they controlled. A large population of Greeks in Eastern Thrace, and Black Sea coastal and southern Bulgaria, was expelled south and west into Greek-controlled Thrace. Concurrently, a large population of Bulgarians was forced from the region into Bulgaria by Greek and Turkish actions. Turkish populations in the area were also targeted by Bulgarian and Greek forces and pushed eastward. As part of the Treaty of Neuilly, and subsequent agreements, the status of the expelled populations was legitimized. This was followed by a further population exchange which radically changed the demographics of the region toward increased ethnic homogenization within the territories each respective country ultimately was awarded.

This was followed by the large-scale Greek-Turkish population exchanges of 1923 (Treaty of Lausanne), which finalized the reversal of Western and Eastern Thrace region's pre-Balkan War demography. The treaty granted the status of a minority to the Muslims in Western Thrace, in exchange for a similar status for the ethnic Greek minority in Istanbul and the Aegean islands of Imbros and Tenedos.

After the German invasion (April 1941), the area was occupied by Bulgarian troops, as part of the triple Axis occupation of Greece, during World War II. During this period (1941-1944) the demographic destribution was further changed, with the arrest of the region's ca. 4,500 Jews by the Bulgarian police and their deportation to death camps administered by Germany. None of them survived.[6]

The economy of Thrace in recent years has become less dependent on agriculture. A number of Greek-owned high-tech industries belonging to the telecommunications industry have settled in the area. The Via Egnatia motorway which passes through Thrace, has contributed to the further development of the region. Tourism is slowly becoming more and more important as the Aegean coast of Region of Thrace boasts quite a few beautiful beaches. Additionally, there is the potential for winter tourism activities in the Rhodopi mountains, the natural border with Bulgaria which are covered by dense forest. 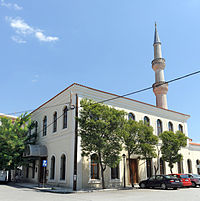 The Muslim minority of Thrace has been a source of diplomatic tension between Greece and Turkey. Turkey considers the whole of the Muslim minority a strictly Turkish minority. Greece, on the other hand, considers the whole minority to be Greek citizens of diverse origins and a recognised religious minority under Greece's international obligations (Treaty of Lausanne). Athens affords no official recognition to a Turkish or any other ethnicity.

Such documents as the said paper of the Greek Consulate Berlin[citation needed] have no effect on the minority politics of Greece concerning the concession of any ethnic identity to the Muslim minority and they primarily serve as information publications about Greece to the world.

Within the larger definition of the Muslim minority, the Turks of Western Thrace were exempted from the 1922-1923 Exchange of populations between Greece and Turkey and were granted special rights within the framework of Lausanne Treaty, such as education in the Turkish language.

However, there are ethnic differences within the 'Turkish' minority. The estimated numbers of its constituent ethnic groups are given in a document of the Greek Consulate Berlin[citation needed] as follows:

The last censuses which asked about ethnicity were held in the transitional period before the region became part of Greece.[citation needed] A number of estimates and censuses during the 1912-1920 period gave the following results about the ethnic distribution of the area that would become known as Western Thrace:[8]

The Pomak population depending on the source was sometimes counted together with the Turks (Muslims) following the Ottoman system of classifying people according to religion, while in other occasions was specified separately. According to the Bulgarian view, they are considered "Bulgarian Muslims" and an integral part of the Bulgarian nation.[8]

The population of the region, according to the official census of 1928 and 1951 conducted by the local authorities, per mother tongue, was as follows:[15] 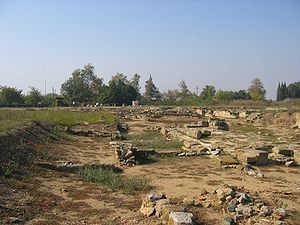 Ruins of the ancient city of Abdera.