The old village area, now the downtown district, was settled in 1720 as part of the Elizabethtown Tract. Westfield was originally formed as a township on January 27, 1794, from portions of Elizabeth Township, while the area was still part of Essex County, and was incorporated on February 21, 1798, as one of New Jersey's initial group of 104 townships by an act of the New Jersey Legislature. It became part of the newly formed Union County on March 19, 1857. Portions of the township have been taken to form Rahway Township (February 27, 1804), Plainfield Township (April 5, 1847), Cranford Township (March 14, 1871), Fanwood Township (March 6, 1878; now known as Scotch Plains), Mountainside (September 25, 1895) and Hillside (April 3, 1913). The Town of Westfield was incorporated on March 4, 1903, replacing Westfield Township.[22][23] The name of the town is derived from its location in the western, undeveloped fields of the Elizabethtown tract.[24][25]

Unincorporated communities, localities and place names located partially or completely within the township include Germantown.[26]

Six municipalities border the town of Westfield: Mountainside to the north, Springfield Township to the northeast, Garwood and Cranford to the east, Clark to the southeast, and Scotch Plains to the west and southwest.

The Westfield Memorial Library was founded in 1873 as the "Every Saturday Book Club" and has evolved over the past century into the Westfield Memorial Library of today. The Library is located in a large, modern, Williamsburg-style building at 550 East Broad Street. The library's collection consists of over 250,000 books, two dozen public computers, a wide array of multimedia options, a large youth services area with a vivid mural depicting Westfield history, and multiple tables and carrels for studying. The library offers classes for adults and children, storytimes for children, and computer instruction.[27] 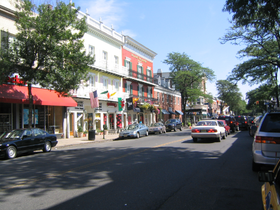 Westfield's downtown features many local and national stores, such as Lord & Taylor and several landmarks that were shown and used in the NBC network television show Ed such as the Rialto Theater. There are over 40 restaurants and casual dining establishments throughout the downtown. Downtown is located mostly north of the Westfield train station. The downtown area has a mix of independent stores and boutiques as well as national stores. Over one-third of the retailers and restaurants have existed for 25 years or more.

Downtown Westfield, with over 200 retail establishments and 400 commercial enterprises, is a regional destination in New Jersey. The Downtown Westfield Corporation (DWC) manages the Special Improvement District (SID) area's growth and enhancement. The DWC participates in the National Main Street program associated with the National Trust for Historic Preservation. It is funded by a SID assessment on downtown properties and operates as the district's management agency. The DWC sponsors marketing efforts and promotions, special event planning, urban design and building improvement projects. The DWC works closely with the town government and volunteer groups to improve the downtown area. In 2004, Westfield won the Great American Main Street Award from the National Trust.[28] In 2010, Westfield was the winner of the America in Bloom contest for communities with a population of 25,001–50,000 against the other two towns entered in their category.[29] Shopping and dining in Westfield attracts citizens from other communities across the state.

Several war memorials (including ones dedicated to the Korean War, World War II, and the Spanish–American War) are located in a plaza near the downtown. The plaza is also home to the September 11 Memorial Park, which pays special tribute to the residents of Westfield who died in the September 11 terrorist attacks.[30][31]

Westfield has a significant Jewish community.[44]

Westfield is governed under a Special Charter granted by an act of the New Jersey Legislature. The government consists of a Mayor and an eight-member Town Council, with all positions filled in partisan elections. The Mayor is elected directly by the voters at-large to a four-year term of office. The Town Council consists of eight members, with two members elected from each of four wards. Town Council members are elected to serve four-year terms on a staggered basis, with one seat in each ward coming up for election every other year.[7] The Town Council holds meetings every two weeks where it discusses legislation under consideration, and which are open to the public.

In the 2009 Mayoral and Town Council elections, Mayor Skibitsky and Council Members Della Fera, Kimmins, Haas and Loughlin were victorious.[48][52]

The Westfield Police Department (WPD) has been a vital part of the town's culture since its foundation. The chief of police is David Wayman, who was appointed in April 2012 to succeed John Parizeau.[53] The department operates a Patrol Division, Traffic Safety Bureau, Records Bureau, Detective Bureau, Juvenile and Community Policing Bureau, and its own Emergency Services Unit. Westfield's Parking Services also falls under the jurisdiction of the WPD. Parking Services is responsible for monitoring parking and traffic safety within Westfield's Central Business District and near schools. The WPD also has a Law Enforcement Explorers Post, Post #90.[54] Each division of the WPD operates different vehicles, most with a classic black-and-white paint scheme. As of May 2014, they are as follows:

The Westfield Fire Department was formed in 1875 following a fire that destroyed a city block on East Broad Street.[55] The WFD is a combination department with 36 paid/career firefighters and 15 volunteer firefighters. There are four platoons of eight (a Battalion Chief, two Lieutenants and five Firefighters) working a 24/72 hour work schedule out of two fire stations. Administrative members include the Chief of Department, the Deputy Chief of Operations, and the Deputy Chief of Fire Prevention. The Fire Safety Inspector position in the Fire Prevention Bureau was eliminated in January 2009 due to budget cuts. The Chief of Department is Daniel J. Kelly.[56]

Westfield Fire Headquarters, located at 405 North Avenue West, is manned 24 hours a day by a Battalion Chief (Shift Commander), a Lieutenant and three Firefighters. These personnel man an Engine Company, first due on the north side of town, and the Ladder Company. A reserve Engine Company and a Utility Pick-Up are also housed at Fire Headquarters. The office of the Chief of Department and the Deputy Chief of Operations are located here as well.

Station 2, located at 1029 Central Avenue, is manned 24 hours a day by a Lieutenant and two firefighters. These personnel man an Engine Company, first due on the south side of town. A reserve Engine Company, a Utility Pick-Up, and a spare SUV are also housed at Station 2. The Fire Prevention Bureau is located at Station 2 and houses the office of the Deputy Chief of Fire Prevention.

The WFD in operates a fleet of four E-One Engines (2 x 2,000 GPM & 2 x 1,500 GPM) and 1 Pierce Arrow XT 100' Rearmount Ladder, one support SUV, and three staff 4x4 vehicles. The paint scheme for the older apparatus (Engine 4) is yellow, with the newer apparatus (Ladder 1, Engines 2,3 & 5) being red bodies with white cabs. The support vehicles, a Ford Pick-Up (Utility 7), a Chevy Pick-Up (Utility 8), and a Jeep Cherokee (Car 9) are red with white striping and the remaining staff vehicles, for Chief Officers, are unmarked Dodge Durangos (Car 1,11,12).

The WFD responds annually to approximately 2,000 calls for service. The WFD serves as a backup EMS agency for the town if the Westfield Volunteer Rescue Squad is not readily available. All members are CPR-Defib certified with 27 members currently New Jersey certified EMTs with the remaining members trained to the first responder level. Both stations are always manned with FF/EMTs 24 hours a day.

The WFD is also a partner in the Union County Fire Mutual Aid agreement, responding to numerous requests for aid to any of the other 20 municipalities in Union County.[57]

The Westfield Volunteer Rescue Squad is manned around the clock by volunteer certified EMTs. Shifts range from 5 hours in the morning and afternoon to 14 hour overnights. The Squad has three ambulances to go out on calls with at least a crew every shift. Members are paged in the event that another emergency comes in and the original crew is answered a medical call. Dispatchers are also volunteers, answering phones directly from the Police line.[59]

Westfield is located in the 7th Congressional District[60] and is part of New Jersey's 21st state legislative district.[10][61][62] 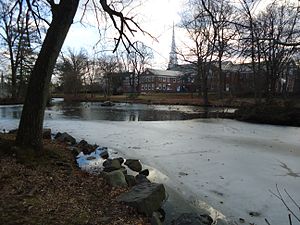 Holy Trinity Interparochial School is a Middle States-accredited Catholic school run by the three parishes of Holy Trinity and St. Helen's in Westfield along with Our Lady of Lourdes in Mountainside, which offers education from Pre-Kindergarten to 8th grade and operates under the auspices of the Roman Catholic Archdiocese of Newark.[111][112] 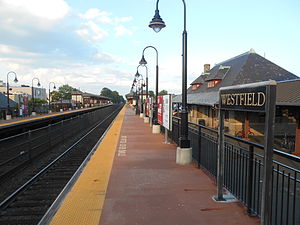 Newark Liberty International Airport is approximately 20 minutes away, most conveniently reached via Route 22 or NJT trains. Linden Airport, a general aviation facility, is in nearby Linden, New Jersey.

A number of taxicab companies operate out of Westfield, mostly for transportation to and from airports. The Uber on-demand car service has recently increased in popularity in the area.

Westfield is served by the locally-published weekly newspaper, The Westfield Leader.[117] The Record-Press[118] had served the community until it ended publication in 2008. Westfield is also served by multi-community newspapers including the Courier News, a daily newspaper based in Bridgewater Township, and The Star-Ledger based in Newark. Westfield Patch is an online news source dedicated strictly to local Westfield news that is updated around the clock by a small staff of paid editors and volunteer contributors. The Alternative Press of Westfield is a locally owned and operated all-online newspaper serving the residents, organizations, and business owners of Westfield.

The local community access channel 36 operates out of the Municipal Building on Broad Street in Westfield on Mondays, Wednesdays, Fridays and half of every Sunday. WCT provides limited community-related programming, coverage of town council meetings, and operates the WCT Bulletin Board. WCT shares time on channel 36 with Blue Devil Television, which originates from Westfield High School and produces nearly 200 original productions each academic year.[119]

The Greek Orthodox Archdiocese of America Metropolis of New Jersey is headquartered in Westfield.[120]

People who were born in, residents of, or otherwise closely associated with Westfield include: