From Infogalactic: the planetary knowledge core
Jump to: navigation, search
For the wider London borough, see City of Westminster.
For other uses, see Westminster (disambiguation).

Westminster (/ˈwɛsᵗmɪnstər/) is an area of central London within the City of Westminster on the north bank of the River Thames.[1] Westminster's concentration of visitor attractions and historic landmarks, one of the highest in London, includes the Palace of Westminster, Buckingham Palace, Westminster Abbey and Westminster Cathedral.

The name Westminster originated from the informal description of the abbey church and royal peculiar of St Peter's (Westminster Abbey), literally West of the City of London, indeed until the Reformation there was a reference to the 'East Minster' at Minories (Holy Trinity Priory, Aldgate) east of the City; the abbey was part of the royal palace that had been created here by Edward the Confessor. It has been the home of the permanent institutions of England's government continuously since about 1200 (High Middle Ages' Plantagenet times) and is now the seat of British government.

In a government context, Westminster often refers to the Parliament of the United Kingdom, which is located in the UNESCO World Heritage Palace of Westminster - also known as the Houses of Parliament. The closest tube stations are Westminster, St James Park on the Jubilee and Circle and District lines. 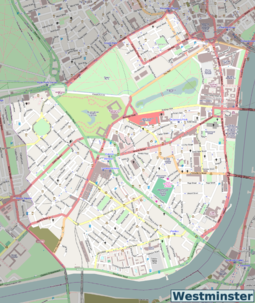 The area is the centre of UK government, with Parliament in the Palace of Westminster and most of the major Government ministries known as Whitehall, itself the site of the royal palace that replaced that at Westminster.

Within the area is Westminster School, a major public school which grew out of the Abbey, and the long established University of Westminster, attended by over 20,000 students. Bounding Westminster to the north is Green Park, a Royal Park of London.

The area has a substantial resident population, indeed most of its listed buildings are residential. A proportion of residents are people of limited means, living in council and Peabody Trust estates in certain streets between Westminster Abbey and Millbank. Hotels, large Victorian homes and barracks exist nearer to Buckingham Palace.

It describes an area no more than 1 mile (1.6 km) from Westminster Abbey and Palace of Westminster north of the River Thames.[2] The settlement grew up around the palace and abbey, as a service area to them. The need for a parish church, St Margaret's Westminster for the servants of the palace and of the abbey who could not worship there indicates that it had a large enough population as a small village. It became larger and in the Georgian period became connected through urban ribbon development with the City along the Strand. It did not become a viable local government unit until created as a civil parish. However, as a result of Henry VIII's Reformation the Abbey was abolished and established as a Cathedral and that is the source of the origin of the parish being described as 'City' although it was only a fraction of the size of the City of London and the Borough of Southwark at that time. Indeed, the Cathedral and diocesan status of the church lasted from only 1539 to 1556, but the 'city' status was retained for a mere parish within Middlesex. As such it is first known to have had two Members of Parliament in 1545 as a new Parliamentary Borough, centuries after the City of London and Southwark were enfranchised.[3]

Bird's Eye Picture of Westminster in 1909

The historic core of Westminster is the former Thorney Island on which Westminster Abbey was built. The abbey became the traditional venue of the coronation of the kings and queens of England from that of Harold Godwinson.

From about 1200, near the abbey, the Palace of Westminster became the principal royal residence, marked by the transfer of royal treasury and financial records to Westminster from Winchester. Later the palace housed the developing Parliament and England's law courts. Thus London developed two focal points: the City of London (financial/economic) and Westminster (political and cultural).

The monarchy later moved to the St James' Palace and the Palace of Whitehall a little towards the north-east and eventually to Buckingham Palace and other palaces. The main law courts have since moved to the Royal Courts of Justice. 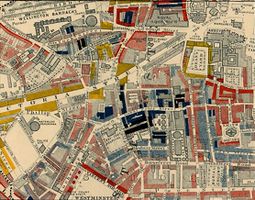 Charles Booth's poverty map showing Westminster in 1889 showed the full range of income and capital brackets living in adjacent streets within it; its central western area had become (by 1850) (the) Devil's Acre in the southern flood channel ravine of the Tyburn (stream), yet along Victoria Street and other small streets and squares were the highest colouring of social class in London, yellow/gold. The abject poverty with the clearance of this slum and drainage improvement has been shed from Westminster but there is a typical Central London property distinction within the area which is very acute, epitomised by grandiose 21st century developments, architectural high point listed buildings[5] and nearby social housing (mostly non-council housing) buildings of the Peabody Trust founded by philanthropist George Peabody. 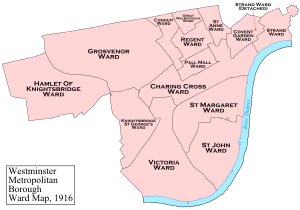 A map showing the wards of Westminster Metropolitan Borough as they appeared in 1916.

The Westminster area formed part of the City and Liberty of Westminster in Middlesex. The ancient parish was St Margaret; after 1727 this became the civil parish of 'St Margaret and St John', the latter a new church required for the increasing population. The area around Westminster Abbey formed the extra-parochial Close of the Collegiate Church of St Peter surrounded by — but not part of — either parish. Until 1900 the local council was the combined vestry of St Margaret and St John (also known as the Westminster District Board of Works from 1855 to 1887), which was based at Westminster City Hall on Caxton Street from 1883. The Liberty of Westminster, governed by the Westminster Court of Burgesses, also included St Martin in the Fields and several other parishes and places. Westminster had its own quarter sessions, but the Middlesex sessions also had jurisdiction. The area was transferred from Middlesex to the County of London in 1889 and the local government of Westminster was reformed in 1900 when the court of burgesses and parish vestries were abolished, to be replaced with a metropolitan borough council. The borough was given city status, allowing it to be known as the City of Westminster and its council as Westminster City Council.

Wider uses of the term

Thus "Westminster" with its focus in public life from earliest days is casually used as a metonym for Parliament and the political community of the United Kingdom generally (the civil service is similarly referred to by the northern sub-neighbourhood it inhabits, "Whitehall") and "Westminster" is consequently also used in reference to the Westminster system, the parliamentary model of democratic government that has evolved in the United Kingdom and for those other nations, particularly in the Commonwealth of Nations and other parts of the former British Empire that adopted it.

The term Westminster Village, sometimes used in the context of British politics, does not refer to a geographical area at all; employed especially in the phrase Westminster Village gossip, it denotes a supposedly close social circle of members of parliament, political journalists, so-called spin doctors and others connected to events in the Palace of Westminster and Government Ministries.