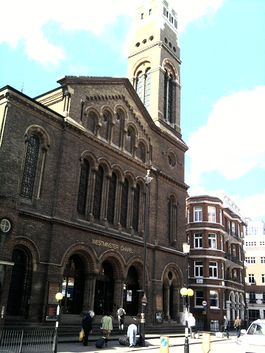 Westminster Chapel is an evangelical Christian church in central London, established in 1840.

The Chapel's own website summarises the background of the area:[2]

In 1840 the area where Westminster Chapel now stands was relatively undeveloped. Since that time the area has improved considerably and historic attractions such as Buckingham Palace and Westminster Abbey bring millions of tourists to the area each year.

Prominent among the past deacons at Westminster Chapel have been Sir Frederick Catherwood (born 1925) (son-in-law to Lloyd-Jones) and M. J. "Monty" Micklewright (1897-1994)[3]

The current pastor, Greg Haslam, was previously the pastor of Winchester Family Church, a Newfrontiers church, and has introduced many of Newfrontiers' core values to the church.

In addition to the activities of the Chapel's own worshipping community, the Chapel is well known as a host venue for many Christian conferences and assemblies including, in the past, as a venue for the "May Meetings" of the Congregational Union of England and Wales.

The church is evangelical in its beliefs. Services incorporate a time of worship, including opportunities for prophecies, and a sermon, biblical in its manner and usually preached by the senior pastor, Greg Haslam, or by other leaders within the church including its executive director, Howard Satterthwaite.

Westminster Chapel aims to be a prophetic voice to London, the UK and the nations. It recently[when?] issued a "Mission, Vision, Values" brochure, stating that the church would be Spirit-led, prophetic, and be increasingly mission-minded. The church aims to be a family and open to all who may want to visit. Sunday services are at 11 am and 5.30 pm.

Groups called Life Groups meet in homes throughout London, usually on Tuesday and Wednesday nights. These include special groups for students.[4] The church's website states that these are "the hub of friendship, discipleship and evangelism" at the Chapel.

Westminster Chapel hosts a free Alpha course twice a year. Alpha is an opportunity to explore the meaning of life over dinner, and the Chapel's course usually runs on a Monday night.

There are approximately seventy students and people in their twenties currently attending the Chapel, and the church has a dedicated team who minister to this age bracket. There are events specifically aimed at students and 20s, as well as those that cater to the wider church family which students can join in with as well.

On Sundays, between 3-5pm, there is a cafe (Sam's Cafe) specifically for students.

Twice a year, the Chapel hosts a retreat for students and twenties in the countryside.

The full list of previous pastors is as follows:

The Chapel building is Italian Romanesque Revival in style. The vast atmospheric auditorium, with seating capacity of about 1500, is nearly oval, with two tiers of galleries and large open roof span. The galleries too are nearly oval, except that the 'circle' of the upper gallery is incomplete so as to accommodate the pipe organ. There is a high platform or dais toward the front of the Chapel, accommodating the Communion Table and chairs for the presiding minister and the serving deacons. This platform or dais stands about three feet above the floor level. Beyond this, there is a large (and even higher) platform or dais, forming a very large preaching-station or pulpit. This feature is circular in shape and it is surmounted by a balustrade. It may perhaps be one of the largest pulpits in any church building. Sir Nikolaus Pevsner considered the interior of the Chapel to be of particular interest.

The building is of stock brick, with some red brick and stone dressings. The elevation to Buckingham Gate has gabled façade with recessed triple arched central porch, with graduated arcading above, all having decorative shafting. There is a tower to the right, with coupled arched windows. The uppermost stage of the tower was added in the twentieth century in different style and colour.

A four manual pipe organ, built originally by the eminent organ-builder Henry Willis (1821-1901) (often known as "Father Willis"), the instrument was restored and enlarged in the 1920s by Messrs Rushworth & Draper.[7]