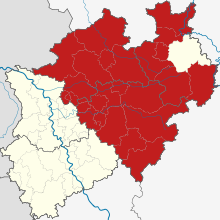 Westphalia or Westfalia (/wɛstˈfeɪliə/; German: Westfalen pronounced [vɛstˈfaːlən], Westphalian: Wäästfaln, Westfaoln) is a region in Germany, centred on the cities of Arnsberg, Bielefeld, Dortmund and Münster.

Westphalia is roughly the region in between the rivers Rhine and Weser, located both north and south of the Ruhr River. No exact definition of borders can be given, because the name "Westphalia" was applied to several different entities in history. For this reason specifications of area and population differ greatly. They range between 16,000 and 22,000 km2 (6,200 and 8,500 sq mi) in land area, and between 4.3 million and 8 million inhabitants. There is, however, a general consensus that Münster, Bielefeld and Dortmund are part of Westphalia. In principle the term "Westphalia" contrasts with the much less used term "Eastphalia", which roughly covers the southeastern part of the present-day state of Lower Saxony, eastern Saxony-Anhalt and northern Thuringia.

A linguistic definition of Westphalia (see Westphalian language) includes the former Prussian Province of Westphalia (except Siegen-Wittgenstein), Lippe, the region around Osnabrück and the greater area of the Emsland. Present-day common use, however, often restricts the notion to the present part of North Rhine-Westphalia.

Westphalia is known for the 1648 Peace of Westphalia which ended the Thirty Years' War, as the two treaties were signed in Münster and Osnabrück. The region is also home to the headquarters of Westfalia-Werke, the contractor that built the VW Westfalia camper vans.

Composed in Iserlohn in 1886 by Emil Rittershaus, the "Westfalenlied" is an unofficial anthem of Westphalia. 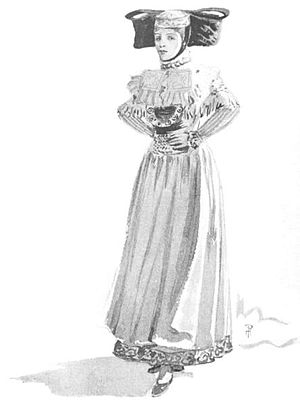 Around 1 A.D. there were numerous incursions through Westphalia and perhaps even some permanent Roman or Romanized settlements. The Battle of Teutoburg Forest took place near Osnabrück (as mentioned, it is disputed whether this is in Westphalia) and some of the tribes who fought at this battle came from the area of Westphalia.

Charlemagne is thought to have spent considerable time in Paderborn and nearby parts. His Saxon Wars also partly took place in what is thought of as Westphalia today. Popular legends link his adversary Widukind to places near Detmold, Bielefeld, Lemgo, Osnabrück and other places in Westphalia. Widukind was buried in Enger, which is also a subject of a legend. 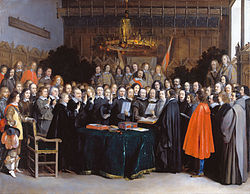 Along with Eastphalia and Engern, Westphalia (Westfalahi) was originally a district of the Duchy of Saxony. In 1180 Westphalia was elevated to the rank of a duchy by Emperor Barbarossa. The Duchy of Westphalia comprised only a small area south of the Lippe River.

Modern Westphalia was part of the Lower Rhenish–Westphalian Circle of the Holy Roman Empire, which comprised territories of Lower Lorraine, Frisia and parts of the former Duchy of Saxony.

As a result of the Protestant Reformation, there is no dominant religion in Westphalia. Roman Catholicism and Lutheranism are on relatively equal footing. Lutheranism is strong in the eastern and northern parts with numerous free churches. Münster and especially Paderborn are thought of as Catholic. Osnabrück is divided almost equally between Catholicism and Protestantism.

Parts of Westphalia came under Brandenburg-Prussian control during the 17th and 18th centuries, but most of it remained divided duchies and other feudal areas of power. The Peace of Westphalia of 1648, signed in Münster and Osnabrück, ended the Thirty Years' War. The concept of nation-state sovereignty resulting from the treaty became known as "Westphalian sovereignty". 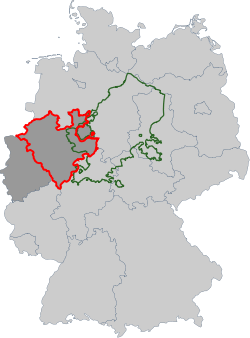 After the defeat of the Prussian Army by the French at the Battle of Jena-Auerstedt, the Treaty of Tilsit in 1807 made the eastern most of today's Westphalia part of the Kingdom of Westphalia from 1807–13. It was founded by Napoleon and was a French vassal state. This state only shared the name with the historical region; it contained only a relatively small part of Westphalia, consisting instead mostly of Hessian and Eastphalian regions.

After the Congress of Vienna, the Kingdom of Prussia received a large amount of territory in the Westphalian region and created the province of Westphalia in 1815. The northernmost portions of the former kingdom, including the town of Osnabrück, had become part of the states of Hanover and Oldenburg.

Candide: the protagonist of Voltaire's novella of the same name, resides in Westphalia in the beginning of the story. Monty Python's Flying Circus - Season 4, Episode 3 - which includes a sketch that discusses Basingstoke in Westphalia.