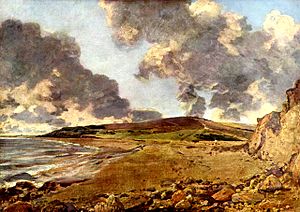 Weymouth Bay is a sheltered bay on the south coast of England, in Dorset. It is protected from erosion by Chesil Beach and the Isle of Portland, and includes several beaches, notably Weymouth Beach, a gently curving arc of golden sand which stretches from the resort of Weymouth, along to the suburbs of Greenhill, Lodmoor and Preston, and terminates just past Furzy Cliff at Bowleaze Cove — a haven for watersports, windsurfing, scuba diving, jetskiing, surfing and swimming.

The bay's waters are excellent for sailing — the best sailing waters in northern Europe,[1] one reason it is home to the Weymouth and Portland National Sailing Academy which hosted the sailing events for the 2012 Olympic Games.

Weymouth Bay is situated approximately halfway along the UNESCO Jurassic Coast World Heritage Site, a 153-kilometre (95 mi) long stretch of coast, important for its varied geology and many unique landforms.