From Infogalactic: the planetary knowledge core
Jump to: navigation, search
For other uses, see Whaler (disambiguation). 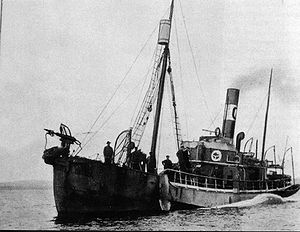 A steam powered whale catcher with harpoon cannon from Sept-Îles (Quebec), about 1900.

A whaler or whaling ship is a specialized ship, designed for whaling, the catching and/or processing of whales. The former includes the whale catcher – a steam or diesel-driven vessel with a harpoon gun mounted at its bow. The latter includes such vessels as the sail or steam-driven whaleship of the 16th to early 20th century and the floating factory or factory ship of the modern era. There have also been vessels which combined the two activities, such as the bottlenose whalers of the late 19th and early 20th century, and catcher/factory ships of the modern era.

Whaleships had two or more whaleboats, open rowing boats used in the capture of whales. Whaleboats brought the captured whales to the whaleships to be flensed or cut up. Here the blubber was rendered into oil using two or three try-pots set in a brick furnace called the tryworks.

At first, whale catchers either brought the whales they killed to a whaling station or factory ship anchored in a sheltered bay or inlet. Later, with the development of the slipway at the ship's stern, whale catchers were able to transfer their catch to factory ships operating in the open sea.

The World War II Flower Class corvettes were based on the design of the whale catcher Southern Pride.[1]

The crews of whaling vessels fought small skirmishes for the control of the Spitsbergen whale fishery between 1613 and 1638.

In the late 18th and early 19th century the owners of whalerships frequently armed their vessels with cannons to enable the vessels to protect themselves against pirates, and in wartime, privateers. At the outbreak of the French Revolutionary Wars in 1793, British privateers captured several French whaleships, among them the Necker and Deux Amis,[2] and Anne.[3] Dutch privateers captured the Port de Paix and the Penn.[4] At the time, many French whaleships transferred to the American flag,[citation needed] the United States being neutral in the Anglo-French war.

Some whaleships also carried letters of marque that authorized them to take enemy vessels should the opportunity arise. In July 1793 the British armed whaleship Liverpool, of 20 guns, captured the French whaleship Chardon. However, Chardon's crew succeeded in retaking their vessel.[5]

In 1793, an armed British whaleship captured the French whaleship Hébé in Walvis Bay.[6]

During the War of 1812, the U.S. Navy captured two whaleships, the Essex Junior and the Seringapatam, and used them as warships. 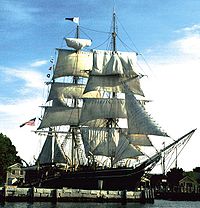 The Charles W. Morgan was a whaleship built in 1841.