From Infogalactic: the planetary knowledge core
Jump to: navigation, search
For the British TV series of the same name, see Wheelbase (TV series). 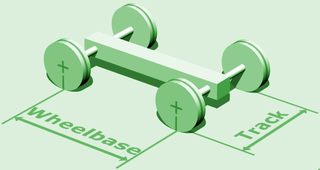 The wheelbase of a vehicle equals the distance between its front and rear wheels. At equilibrium, the total torque of the forces acting on a vehicle is zero. Therefore, the wheelbase is related to the force on each pair of tires by the following formula:

is the force on the front tires,

is the force on the rear tires,

is the distance from the center of mass (CM) to the rear wheels,

is the mass of the vehicle, and

is the gravity constant. So, for example, when a truck is loaded, its center of gravity shifts rearward and the force on the rear tire increases. The vehicle will ride lower. The amount the vehicle sinks will depend on counter acting forces like the size of the tires, tire pressure, and the stiffness of the suspension. If the vehicle is accelerating or decelerating, extra torque is placed on the rear or front tire respectively. The equation relating the wheelbase, height above the ground of the CM, and the force on each pair of tires becomes:

is the force on the front tires,

is the force on the rear tires,

is the distance from the CM to the rear wheels,

is the distance from the CM to the front wheels,

is the mass of the vehicle,

is the height of the CM above the ground,

is the acceleration (or deceleration if the value is negative). So, as is common experience, when the vehicle accelerates, the rear usually sinks and the front rises depending on the suspension. Likewise, when braking the front noses down and the rear rises.:[1]

Because of the effect the wheelbase has on the weight distribution of the vehicle, wheelbase dimensions are crucial to the balance and steering. For example, a car with a much greater weight load on the rear tends to understeer due to the lack of the load (force) on the front tires and therefore the grip (friction) from them. This is why it is crucial, when towing a single-axle caravan, to distribute the caravan's weight so that down-thrust on the tow-hook is about 100 pounds force (400 N). Likewise, a car may oversteer or even "spin out" if there is too much force on the front tires and not enough on the rear tires. Also, when turning there is lateral torque placed upon the tires which imparts a turning force that depends upon the length of the tire distances from the CM. Thus, in a car with a short wheelbase, the short lever arm from the CM to the rear wheel will result in a greater lateral force on the rear tire which means greater acceleration and less time for the driver to adjust and prevent a spin out or worse.

Wheelbases provide the basis for one of the most common vehicle size class systems.

Some Luxury vehicles are offered with long wheelbase variants to increase the spaciousness and therefore the luxury of the vehicle. This practice can often be found on full-size cars like the Mercedes-Benz S-Class, but ultra-luxury vehicles such as the Rolls-Royce Phantom and even large family cars like the Rover 75 came with 'limousine' versions. While Prime Minister of the United Kingdom, Tony Blair was given a long wheelbase version of the Rover 75 for official use.[2]

In contrast, coupé varieties of the some vehicles such as the Honda Accord are usually built on shorter wheelbases than the sedans they are derived from.

The wheelbase on many commercially available bicycles and motorcycles is so short, relative to the height of their centers of mass, that they are able to perform stoppies and wheelies.

In skateboarding the word 'wheelbase' is used for the distance between the two inner pairs of mounting holes on the deck. This is different from the distance between the rotational centers of the two wheel pairs. A reason for this alternative use is that decks are sold with prefabricated holes, but usually without trucks and wheels. It is therefore easier to use the prefabricated holes for measuring and describing this characteristic of the deck.

In rail vehicles, the wheelbase follows a similar concept. However, since the wheels may be of different sizes (for example, on a steam locomotive), the measurement is taken between the points where the wheels contact the rail, and not between the centers of the wheels.

On vehicles where the wheelsets (axles) are mounted inside the vehicle frame (mostly in steam locomotives), the wheelbase is the distance between the front-most and rear-most wheelsets.

On vehicles where the wheelsets are mounted on bogies (amer.: trucks), three wheelbase measurements can be distinguished:

The wheelbase also affects the load the vehicle poses to the track, track infrastructure and bridges. All other conditions being equal, a shorter wheelbase vehicle represents a more concentrated load to the track than a longer wheelbase vehicle. As railway lines are designed to take a pre-determined maximum load per unit of length (tonnes per meter, or pounds per foot), the rail vehicles' wheelbase is designed according to their intended gross weight. The higher the gross weight, the longer the wheelbase must be.