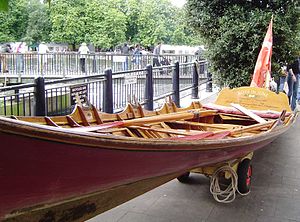 Thames wherry built to 18th-century design at Kingston upon Thames

A wherry is a type of boat that was traditionally used for carrying cargo or passengers on rivers and canals in England, and is particularly associated with the River Thames and also with the Broadland rivers of Norfolk and Suffolk.

London passenger wherries evolved into the Thames skiff, a gentleman's rowing boat. Wherries were clinker-built with long overhanging bows so that patrons could step ashore dryshod before landing stages were built along the river. It is the long angled bow that distinguishes the wherry and skiff from the gig and cutter which have steeper bows following the rise of the Royal Navy, and the building of landing stages.

In the late 18th century the name was given to the Norfolk wherry, a kind of sailing barge with large sails which was developed to replace an earlier cargo boat, the Norfolk Keel.

The term wherry is also associated with a particular type of lighter used on the River Tyne largely in connection with the coal trade. The last complete example Elswick No.2 is owned by Tyne & Wear Archives & Museums service.[1][2] There is a well documented study of the last surviving wrecked examples as surveyed in 2009.[3] 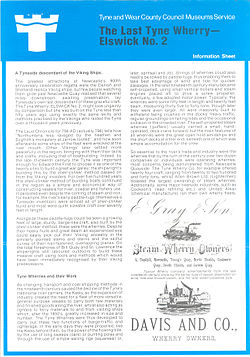 There is firm attestation that the term was used in the Irish Sea. Vessels like "Manx wherries" and "Shell Wherries" (the latter evidently based in Kirkcudbright for the shell fishery) are recorded in the early 19th century. Three shell wherries at least were active in 1810 and known to be of 10-12 tons and clinker built.[4]

The term wherry or wherrie was a regular term used for a boat as the Coverdale Bible of 1535 speaks of "All whirry men, and all maryners vpo the see…" in the Book of Ezekiel.

Wherries along the tideway in London were water taxis operated by watermen and in Elizabethan times their use was widespread. A wherry could be rowed by two men with long oars or by a single waterman using short oars or 'sculls'. An Act of Parliament in 1555 specified that a wherry should be "22½ feet long and 4½ wide 'amidships'".[5] and could carry up to five passengers.[citation needed] According to one account concerning Shakespeare's Globe Theatre, "Patrons were transported across the River Thames to Southwark by 'wherry boats'. At one time over two thousand wherries made their way to and from the theatre district."[citation needed]

During the eighteenth century rowing competitions for watermen became established on the Thames, and the prize was often a new wherry. The Sporting Magazine describes an event on 6 August 1795 as "the contest for the annual wherry given by the Proprietors of Vauxhall by six pairs of oars in three heats". In 1822 Bell's Life reported on a contest on 30 June between eight watermen belonging to the Temple Stairs for "a prize wherry given by the gentlemen of the Inns of Court" and on 31 July "the anniversary of the Grand Aquatic Regatta of the inhabitants of Queenhithe", when "a handsome Wherry" and other prizes were contended for by "six of the free watermen belonging to those stairs".[6] In 1820 there were still 3,000 wherries plying on the Thames, while in the same year there were only 1,200 hackney coaches. As late as 1829, the usual means of crossing the river from Westminster to Vauxhall was by boat, but the wherryman's trade came to an end when new bridges were built and cheap steamboats were put on the river.[7]

In North America, particularly in the Penobscot Bay region of the Gulf of Maine, wherries became the preferred boat for the longshore Atlantic salmon fishery. The Lincolnville Salmon Wherry, the Rhodes Wherry, the Duck Trap Wherry, and the Christmas Wherry are still being built for recreational use.[8] They are generally long and narrow, with a straight stem, a wineglass stern and usually carvel planked (smooth sides). The boat usually has two seats, one for the rower, and one in the stern sheets for the passenger, although longer ones can have a third seat forward. Just as the term "shell wherry" was recognised in 19th century Britain so also was it recognised in 19th century America, for sure in the vicinity of Boston in 1860.[9] 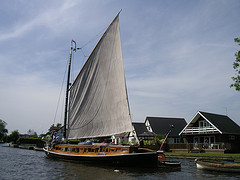 A Norfolk wherry on the River Bure.