From Infogalactic: the planetary knowledge core
Jump to: navigation, search
This article is about the island. For other uses, see Whidbey. 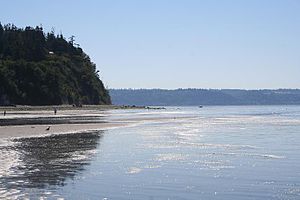 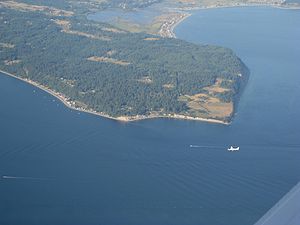 Double Bluff, with Useless Bay to the South (right) and Mutiny Bay to the North (left)

Whidbey Island (historical spellings Whidby, Whitbey,[2] or Whitby) is the largest of the islands composing Island County, Washington, in the United States. (The other large island is Camano Island, east of Whidbey.) Whidbey is about 30 miles (48 km) north of Seattle, and lies between the Olympic Peninsula and the I-5 corridor of western Washington. The island forms the northern boundary of Puget Sound. It is home to Naval Air Station Whidbey Island.

Whidbey Island is approximately 55 miles (89 km) long (from the extreme north to extreme south), and 1.5 to 12 miles (2.4 to 19.3 km) wide, with a total land area of 168.67 square miles (436.9 km2),[4] making it the 40th largest island in the United States. It is ranked as the fourth longest and fourth largest island in the contiguous United States, behind Padre Island, Texas (the world's longest barrier island); Long Island (a fact disputed by residents[5]); and Isle Royale, Michigan[citation needed]. In the state of Washington, it is the largest island, followed by Orcas Island.

Whidbey Island was once inhabited by members of the Lower Skagit, Swinomish, Suquamish, Snohomish and other Native American tribes. The first known European sighting of Whidbey Island was during the 1790 Spanish expedition of Manuel Quimper and Gonzalo López de Haro on the Princesa Real.[6] The island was fully explored in 1792 by Captain George Vancouver. In May of that year, Royal Navy officers and members of Vancouver's expedition, Joseph Whidbey and Peter Puget, began to map and explore the areas of what would later be named Puget Sound. After Whidbey circumnavigated the island in June 1792, Vancouver named the island in his honor.

The first known overnight stay on Whidbey Island by a non-native American was made on May 26, 1840 by a Catholic missionary during travel across Puget Sound.

Lieutenant Charles Wilkes, commander of the United States Exploring Expedition of 1838–1842, sailed the USS Vincennes into Penn Cove in 1841. There he found the largest Native settlement on Puget Sound[citation needed] and noted that a Catholic mission had been started with a 2-acre (8,100 m2) fenced garden. Wilkes named the lower cove Holmes Harbor, after his assistant surgeon, Silas Holmes.

In 1850, Colonel Isaac N. Ebey became the first permanent white settler on Whidbey Island, claiming a square mile (2.6 km²) of prairie with a southern shoreline on Admiralty Inlet. Even though he was farming potatoes and wheat on his land, he was also the postmaster for Port Townsend, Washington and rowed a boat daily across the inlet in order to work at the post office there. On August 11, 1857, Colonel Ebey was murdered and beheaded by Haida who traveled from the Queen Charlotte Islands when he was 39 years old. Ebey was slain in proxy-retaliation for the killing of a Haida chief at Port Gamble. Fort Ebey, named for the Colonel, was established in 1942 on the west side of the central part of the island, just northwest of Coupeville.

Admiralty Head Lighthouse is located in this area, on the grounds of Fort Casey State Park. The area around Coupeville is the federally protected Ebey's Landing National Historical Reserve, named in honor of Isaac Ebey.

In 1984, the island was the site of a violent encounter between law enforcement and white nationalist and organized crime leader Robert Jay Mathews. A large shootout occurred between Mathews and FBI agents in which Mathews was killed in a house fire. Mathews' followers have since gathered on the island at the location where he was killed by FBI agents on the anniversary of his death to commemorate it.

Whidbey Island, along with Camano Island, Ben Ure Island and six uninhabited islands, comprises Island County, Washington. The county seat is located in the town of Coupeville on Whidbey Island.

Population centers of Whidbey Island include the City of Oak Harbor, the Town of Coupeville, the City of Langley, the Village of Freeland, the Community of Greenbank, the Village of Clinton and the Community of Bayview. Only Oak Harbor, Coupeville and Langley are incorporated, the others (with the exception of Greenbank and Bayview) are all Census-designated places, and all but Bayview have their own post offices and ZIP codes.

The economy of Whidbey Island south of Oak Harbor relies heavily on tourism, small-scale agriculture, and the arts.

Tourism is especially important for both Whidbey and Camano Islands. On Whidbey, tourists find a wide range of amenities in the towns of Oak Harbor, Coupeville, Freeland and Langley. Coupeville's Penn Cove Mussel Farm exports large quantities of its highly renowned Penn Cove Mussels. This aquaculture facility, along with a number of small farms, reflects the rural agricultural nature of most of central Whidbey Island.

In addition to being a haven for artists, the southern end of Whidbey Island also serves as a minor bedroom community for the nearby cities of Everett, where the Boeing Everett Factory is located, and Seattle. Commuters to and from those areas use the Washington State Ferries system's run between Clinton and Mukilteo.

File:ClintonSign.jpg
Carved sign welcoming visitors as they arrive by ferry at Clinton.

Whidbey Island is often claimed to be the longest island in the continental United States (or another similar claim), but according to the Seattle Times it cannot be correctly considered so.[7] Whidbey Island has four lakes that are part of its interior hydrology: Cranberry Lake (inside Deception Pass State Park), Deer Lake (inside Deer Lake Park), Goss Lake and Lone Lake (both near the town of Langley).[8]

Whidbey Island contains Ebey's Landing National Historical Reserve, the first national historic reserve in the US created by the National Park Service to preserve the rural history and culture of the island and to protect the area's rare and sensitive plants.

Earth Sanctuary is a nature reserve, sculpture garden and retreat center on Whidbey Island. The ponds and bog fen complex have been designated as a “habitat of local importance” by the Whidbey Audubon Society and Island County Critical Areas program.[9][10]

Whidbey Island hosts many festivals and celebrations throughout the year. 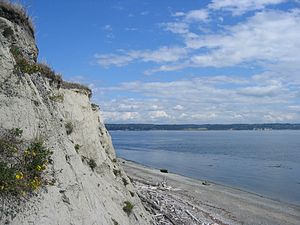 A cliff on Whidbey Island near Fort Casey

Vegetation varies greatly from one end of the island to the other. Vegetation in the south is more similar to that of mainland Washington. The principal trees are Douglas fir, red alder, bigleaf maple, western red cedar, and western hemlock. Compared to the rest of western Washington state, vine maple is notably absent, except where they have been planted. Other under-story plants include the evergreen huckleberry, lower longleaf Oregon grape, elderberry, salal, oceanspray, and varieties of nettle. Non-native introduced plants such as foxglove, ivy and holly are also evident.

Farther up the island, however, the shorter Oregon-Grape and the blue Evergreen Huckleberry is seen less, while tall Oregon-grape and Red Huckleberry predominate. The native Pacific rhododendron is much more visible. Amongst the deciduous varieties, Garry oak (from which Oak Harbor takes its name) are seen more frequently in the northern portion of the island and Pacific madrone is also notably present. In the conifer classification, grand fir is found more in the northern part of Whidbey Island along with Sitka spruce and shore pine. There are three open prairie areas on Whidbey Island – Smith Prairie, Crockett Prairie and Ebey Prairie. Interestingly, some patches of prickly pear cactus are found along the slopes near Partridge Point.[citation needed]

Gray whales migrate between Whidbey and Camano Islands during March and April and can be seen from both ship and shore.[citation needed] Orca also make use of the waters surrounding Whidbey Island.

Oak Harbor School District operates in Oak Harbor. Within the district, there is one high school, one alternative high school, two middle schools, and five elementary schools. Within the Washington Interscholastic Activities Association, Oak Harbor High is listed as a 3-A school.

Coupeville School District operates in Coupeville, Washington and Greenbank, Washington. Within the district, there is one high school, one middle school, and one elementary school. Within the Washington Interscholastic Activities Association, Coupeville High is listed as a 1-A school.

Skagit Valley College has a campus located in Oak Harbor, and a limited service campus in South Whidbey.

Seattle Pacific University owns Camp Casey, a retreat center near Coupeville, which was once the barracks for the adjacent Fort Casey. 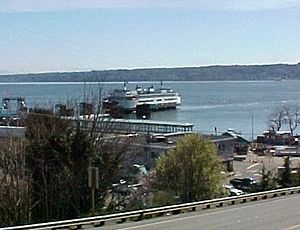 The only bridge that reaches Whidbey Island is the Deception Pass Bridge, State Route 20, which connects the north end of Whidbey to the mainland via Fidalgo Island. Prior to the completion of the bridge in 1935, Whidbey Island was linked to Fidalgo Island by the Deception Pass ferry, which ran from 1924 to 1935. Modern ferry service is available via State Route 20 on the Coupeville to Port Townsend ferry, and via State Route 525 on the Clinton to Mukilteo ferry service on the southern east coast.

Travel on the island involves use of an extensive county road system, or city infrastructure depending on location, all of which act as feeders to the two state highways State Route 525 and State Route 20.

Whidbey Island's State Routes 525/20 is the only nationally designated Scenic Byway on an island. It is appropriately named the "Whidbey Island Scenic Isle Way."

Public transportation is provided by Island Transit, which provides a zero-fare bus service paid for by a 6/10th of 1% sales tax within the county. There are currently 10 bus routes serving Whidbey Island. No service is available on Saturdays, and buses do not run on Sunday or major holidays.

Whidbey General Hospital is the regional, county-run hospital. Located in Coupeville, the hospital has extension clinics in both Clinton and Oak Harbor. The Naval Air Station in Oak Harbor has a limited service hospital for military personnel, veteran retirees and their dependents only.