From Infogalactic: the planetary knowledge core
Jump to: navigation, search
For the Whig philosophy of history, see Whig history.

Whiggism, sometimes spelled Whigism, is a historical political philosophy that grew out of the Parliamentarian faction in the Wars of the Three Kingdoms (1639-1651). The whigs' key policy positions were the supremacy of Parliament (as opposed to that of the king), tolerance of Protestant dissenters, and opposition to a Catholic (especially a Stuart) on the throne.[1] After the huge success of the Glorious Revolution of 1688-1689, Whiggism dominated English and British politics until about 1760, although in practice it splintered into different factions. After 1760 the Whigs lost power, apart from sharing it in a few short-lived coalitions, but Whiggism fashioned itself into a generalized belief system that emphasized innovation and liberty and was strongly held by about half of the leading families in England and Scotland, as well as most merchants, Dissenters and professionals. The opposing Tory position was held by the other great families, the Church of England, and most of the landed gentry and officers of the army and the navy.

Whigs who opposed Walpole often called themselves "Old Whigs" and comprised part of the Country Party.

Whiggism referred originally to the Whigs of the British Isles, but in its "Old Whig" form was largely adopted by the American Patriots in the Thirteen Colonies. American Whiggism was known as republicanism.

One meaning of 'whiggism' given by the Oxford English Dictionary is "moderate or antiquated Liberalism".[2]

Quickly following the adoption of 'whig' as the name of a political faction, the word whiggism was already in use by the 1680s. In 1682 Edmund Hickeringill published his History of Whiggism.[3] In 1702 Daniel Defoe, writing satirically in the guise of a Tory, asserted, "We can never enjoy a settled uninterrupted Union and Tranquility in this Nation, till the Spirit of Whiggisme, Faction, and Schism is melted down like the Old-Money".[4]

The true origins of what became known as whiggism lie in the English Civil War and the power struggle between Parliament and King Charles I. However, the immediate origins of the Whigs and whiggism were in the Exclusion Bill crisis of 1678 to 1681, in which a "country party" battled a "court party" in an unsuccessful attempt to exclude James, Duke of York, from succeeding his brother Charles II as king of England, Scotland, and Ireland. This crisis was prompted by Charles's lack of a legitimate heir, by the discovery in 1673 that James was a Roman Catholic, and by the so-called "Popish Plot" of 1678.[5]

While a major principle of whiggism was opposition to popery, that was always much more than a mere religious preference in favour of Protestantism, although most Whigs did have such a preference. Sir Henry Capel outlined the principal motivation of the cry of "no popery" when he said in the House of Commons on 27 April 1679:

From Popery came the notion of a standing army and arbitrary Power... Formerly the Crown of Spain, and now France, supports this root of Popery amongst us; but lay Popery flat, and there's an end of arbitrary Government and power. It is a mere chimera, or notion, without Popery.[6]

Although they were unsuccessful in excluding the Duke of York from the throne, the Whigs, in alliance with William of Orange, brought him down in the Glorious Revolution of 1688. By that event, a new supremacy of parliament was established, which itself was one of the principles of whiggism, much as it had been the chief principle of the Roundheads in an earlier generation.[7] 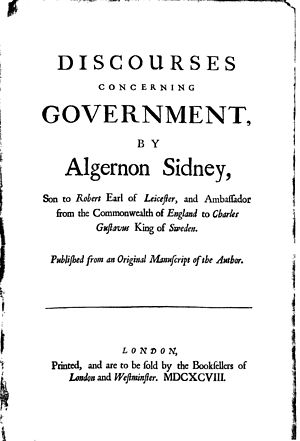 Lee Ward (2008) argues that the philosophical origins of Whiggism came in James Tyrrell's Patriarcha Non Monarcha (1681), John Locke's Two Treatises of Government (1689), and Algernon Sidney's Discourses Concerning Government (1698).[8] All three were united in opposing Sir Robert Filmer's defence of divine right and absolute monarchy. Tyrrell propounded a moderate Whiggism which interpreted England's balanced and mixed constitution "as the product of a contextualized social compact blending elements of custom, history, and prescription with inherent natural law obligations."[9] Sidney, however, emphasized the main themes of Republicanism. He based Whig ideology in the sovereignty of the people by proposing a constitutional reordering that would both elevate the authority of Parliament and democratize its forms; Sidney also emphasized classical republican notions of virtue.[10] Ward says that Locke's liberal Whiggism rested on a radically individualist theory of natural rights and limited government.[11] Tyrrell's moderate position came to dominate Whiggism, and British constitutionalism as a whole, from 1688 to the 1770s.[12] The more radical ideas of Sidney and Locke, argues Ward, became marginalized in Britain, but emerged as a dominant strand in American republicanism. The issues raised by the Americans, starting with the Stamp Act crisis of 1765, ripped Whiggism apart in a battle of parliamentary sovereignty (Tyrrell) versus popular sovereignty (Sidney and Locke).[13]

Whiggism took different forms in England and Scotland, even though from 1707 the two nations shared a single parliament.[14] While English whiggism had at its heart the power of parliament, creating for that purpose a constitutional monarchy and a permanently Protestant succession to the throne, Scottish Whigs gave a higher priority to using power for religious purposes, including maintaining the authority of the Church of Scotland, justifying the Protestant Reformation, and emulating the Covenanters.[14]

There were also Whigs in the North American colonies, and while whiggism there had much in common with that in Great Britain, it too had its own priorities. In the unfolding of the American Revolution such whiggism became known as republicanism.[15]

In India, Prashad (1966) argues that the profound influence of the ideas of Edmund Burke introduced Whiggism into the mainstream of Indian political thought. The Indians adopted the basic assumptions of Whiggism, especially the natural leadership of an elite, the political incapacity of the masses, the great partnership of the civil society, and the best methods of achieving social progress, analyzing the nature of society and the nation, and depicting the character of the ideal state.[16]