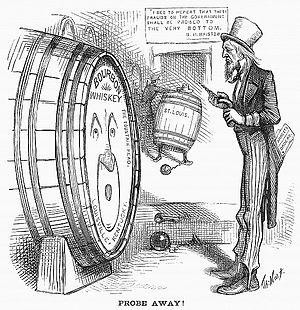 In the United States, the Whiskey Ring was a scandal, exposed in 1875, involving diversion of tax revenues in a conspiracy among government agents, politicians, whiskey distillers, and distributors. The Whiskey Ring began in St. Louis but was also organized in Chicago, Milwaukee, Cincinnati, New Orleans, and Peoria. Before they were caught, a group of politicians were able to siphon off millions of dollars in federal taxes on liquor; the scheme involved an extensive network of bribes involving distillers, rectifiers, gaugers, storekeepers, and internal revenue agents.

U.S. Secretary of the Treasury Benjamin Bristow, working without the knowledge of the President or the Attorney General, broke the tightly connected and politically powerful ring in 1875 using secret agents from outside the Treasury department to conduct a series of raids across the country on May 10, 1875. The trials began at Jefferson City, Mo. in October 1875. Ultimately, 110 convictions were made and over $3 million in taxes were recovered. President Grant appointed General John Brooks Henderson (a former U.S. Senator from Missouri) to serve as special prosecutor in charge of the indictments and trials, but Grant eventually fired Gen. Henderson for challenging Grant's interference in the prosecutions. Grant replaced Henderson with attorney James Broadhead.

The Whiskey Ring was seen by many as a sign of corruption under the Republican governments that took power across the nation following the American Civil War. General Orville E. Babcock, the private secretary to the President, was indicted as a member of the ring — for this reason, President Ulysses S. Grant, although not directly involved in the ring, came to be seen as emblematic of Republican corruption, and later scandals involving his Secretary of War William W. Belknap only confirmed that perception. The Whiskey Ring scandal, along with other alleged abuses of power by the Republican party, contributed to national weariness of Reconstruction, which ended after Grant's presidency with the Compromise of 1877.