From Infogalactic: the planetary knowledge core
Jump to: navigation, search
This article is about the company. For other uses, see Whitbread (disambiguation).

Whitbread PLC is a multinational hotel, coffee shop and restaurant company headquartered in Dunstable, United Kingdom. Its largest division is Premier Inn, which is the largest hotel brand in the UK with around 650 hotels and over 50,000 rooms. Its Costa Coffee chain has 3,080 shops across 30 countries as of May 2014 and is the world's second-largest international coffee shop chain.[3] Its other brands include the restaurant chains Beefeater Grill, Brewers Fayre, Table Table and Taybarns.[2]

Whitbread is listed on the London Stock Exchange and is a constituent of the FTSE 100 Index.

In 1742 Samuel Whitbread formed a partnership with Godfrey and Thomas Shewell and they acquired a small brewery at the junction of Old Street and Upper Whitecross Street and another brewhouse for pale and amber beers in Brick Lane, Spitalfields.[4] Godfrey Shewell withdrew from the partnership as Thomas Shewell and Samuel Whitbread bought the large site of the derelict King's Head brewery in Chiswell Street in 1750.[4] The new brewery was for the production of porter, and was renamed the Hind Brewery after the Whitbread family coat of arms.[4] From the outset, Whitbread was the leading financial partner, and solely responsible for management, and in 1761, Whitbread acquired Shewell's share of the business for £30,000.[4] It was the largest brewery in the world by the 1780s.[5] In 1796 the company produced 202,000 barrels of porter.[4]

The company was first listed on the London Stock Exchange in 1948.[5] Between 1961 and 1971, Whitbread's output increased from 2.1 to 7.4 million hectolitres and it became Britain's third-largest brewer by output.[7]

In 1972, Whitbread became the initiating sponsor of the Whitbread Round the World Race (now called the Volvo Ocean Race), a sailing yacht race around the world held every three years. Whitbread sponsored the race until 2001.

Whitbread Group Plc decided in 2001 to sell all its breweries and brewing interests (Whitbread Beer Company) to Interbrew, now known as InBev.[6] Whitbread-branded alcoholic beverages are still available in the UK, such as canned Whitbread bitter, but these are not produced by InBev, merely produced under licence by other producers. InBev controls the use of the Whitbread brand, and the hind's head logo, for use on beverages. In 2002 Whitbread sold its pub estate, known as the Laurel Pub Company, to Enterprise Inns.[9]

The Whitbread & Co brewery building at 52 Chiswell Street in London still survives, although beer ceased to be brewed there in 1976[5] and it is now a conference and events venue. Still named "The Brewery", it is now part of the Earls Court and Olympia Group, as the site itself was sold to an investment firm in 2005.[10]

In 2005, it moved its core operations from CityPoint in central London, to Oakley House in Luton,[11] and then, in 2006, to larger offices at Whitbread Court in Dunstable (previously used by the now defunct Whitbread Restaurants Company) in a bid to reduce costs.

In 2013, as part of the 2013 meat adulteration scandal DNA tests revealed that horsemeat was present in some meat products sold in outlets owned by Whitbread.[14]

Ready packed meal firm Findus, Compass Group was the world's biggest catering firm at the time, and Whitbread, which was at the time Britain's biggest hotel group was indicted for illegally selling concealed horse meat in food products.[15]

In a public letter later that day, 11 firms, including Tesco and Asda, said they shared shoppers' "anger and outrage".[16] Whitbread vowed to remedy the unacceptable situation on 26 February 2013.[17] The Food Standards Agency's (FSA) chief executive, Catherine Brown also said "it is unlikely we will ever know" how many unwittingly ate horsemeat.[18]

Premier Inn is the UK's largest budget hotel chain, with over 700 hotels.[19] 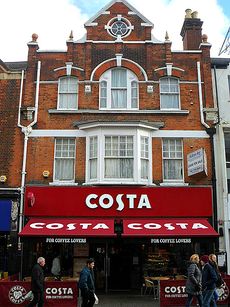 A branch of Costa in Sutton, Greater London 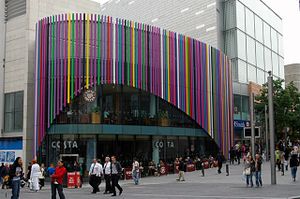 Costa Coffee was founded in London in 1971 by the brothers Sergio and Bruno Costa as a wholesale operation supplying roasted coffee to caterers and specialist Italian coffee shops. Acquired by Whitbread in 1995, it has since grown to over 2,861 stores across 30 countries.[20] By the end of 2010, the company had overtaken Starbucks in the UK, reaching a 37.6% market share measured by revenues.[21] The business has 1,755 UK restaurants, over 3,500 Costa Express vending facilities and a further 1,106 outlets overseas.[3]

Table Table is a UK restaurant brand. They started as converted Brewers Fayre restaurants, next to a Premier Inn. The brand was originally set up in autumn 2006 as an unnamed brand. The name Table Table was launched in May 2008. There are around 105 sites in the UK.[22]

Beefeater was launched in 1974 and serves millions of guests each year. The chain underwent a huge revamp in the early 2000s. It has just finished another refurbishment programme renaming the brand Beefeater Grill. Beefeater Grill has 140 houses across the UK.[23]

Brewers Fayre is a pub-restaurant brand. The pubs are designed to look and feel like traditional local pubs but with a particularly strong family presence. There are around 145 pubs across the country.[24]

Whitbread Inn's are a new brand of restaurants created by Whitbread in 2014. At present there are fourteen pubs in the south of England including The Roundstone in Littlehampton and The Globe Inn situated in Highcliffe, Christchurch (all of which were Table Table).[25]

Taybarns is an all-you-can-eat American buffet-style restaurant. There are six sites in England and one (the very first site at Swansea) in Wales.[26]