The White House Chief of Staff has traditionally been the highest-ranking employee of the White House. The chief of staff's position is a modern successor to the earlier role of the president's private secretary. The role was formalized as the Assistant to the President in 1946 and acquired its current name in 1961.

The Chief of Staff is appointed by and serves at the pleasure of the President; it does not require Senate confirmation.

Originally, the duties now performed by the chief of staff belonged to the president's private secretary and were fulfilled by crucial confidants and advisers such as George B. Cortelyou, Joseph Tumulty, and Louis McHenry Howe to Presidents Theodore Roosevelt, Woodrow Wilson, and Franklin Roosevelt, respectively.[2] The private secretary served as the president's de facto chief aide in a role that combined personal and professional assignments of highly delicate and demanding natures, requiring great skill and discretion.[3] The job of gatekeeper and overseeing the president's schedule was separately delegated to the appointments secretary, as with FDR's aide Edwin "Pa" Watson.

From 1933 to 1939, as he greatly expanded the scope of the federal government's policies and powers in response to the Great Depression, Roosevelt relied on his "Brain Trust" of top advisers. Although working directly for the president, they were often appointed to vacant positions in agencies and departments, from whence they drew their salaries since the White House lacked statutory or budgetary authority to create new staff positions. It was not until 1939, during Franklin D. Roosevelt's second term in office, that the foundations of the modern White House staff were created using a formal structure. Roosevelt was able to get Congress to approve the creation of the Executive Office of the President, which would report directly to the president.

In 1946, in response to the rapid growth of the U.S. government's executive branch, the position of "Assistant to the President of the United States" was established. Charged with the affairs of the White House, it was the immediate predecessor to the modern chief of staff. It was in 1953, under Republican President Dwight D. Eisenhower, that the president's preeminent assistant was designated the "White House Chief of Staff".

Assistant to the president became a rank generally shared by the chief of staff with such senior aides as deputy chiefs of staff, the White House counsel, the White House press secretary, and others. This new system did not catch on immediately. Democrats Kennedy and Johnson still relied on their appointments secretaries instead, and it was not until the Nixon administration that the chief of staff took over maintenance of the President's schedule. This concentration of power in the Nixon and Ford White House (whose last chief of staff was Dick Cheney) led presidential candidate Jimmy Carter to campaign in 1976 with the promise that he would not appoint a chief of staff. And indeed, for the first two and a half years of his presidency, he appointed no one to the post.[4][5] 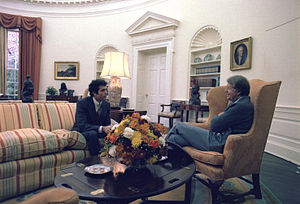 Chris Whipple, author of The Gatekeepers: How the White House Chiefs of Staff Define Every Presidency, loosely describes the role of a White House chief of staff through his interview with former President Barack Obama: "During the last days of his presidency, Barack Obama observed: 'One of the things I've learned is that the big breakthroughs are typically the result of a lot of grunt work—just a whole lot of blocking and tackling.' Grunt work is what chiefs of staff do."[6]

The responsibilities of the chief of staff are both managerial and advisory and can include the following:

Richard Nixon's first chief of staff, H. R. Haldeman, garnered a reputation in Washington for the iron hand he wielded in the position—famously referring to himself as "the president's son-of-a-bitch", he was a rigid gatekeeper who would frequently meet with administration officials in place of the president, then report himself to Nixon on the officials' talking points. Journalist Bob Woodward, in his books All the President's Men and The Secret Man, wrote that many of his sources, including the famous Deep Throat, displayed a genuine fear of Haldeman.[7][8]