The White House Council on Women and Girls is a council, which forms part of the Office of Intergovernmental Affairs, established by Executive Order 13506 on March 11, 2009 with a broad mandate to advise the United States President on issues relating to the welfare of women and girls.[1] The current chair of the council is Valerie Jarrett.[2] 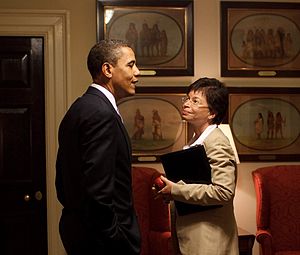 Obama speaks with Jarrett in a West Wing corridor.

Barack Obama signed this Executive Order.[1] The Order was enacted so that the US federal government will be involved in issues that affect women and girls in the US.[1]

The purpose of this order is to establish a coordinated Federal response to issues that particularly impact the lives of women and girls and to ensure that Federal programs and policies address and take into account the distinctive concerns of women and girls, including women of color and those with disabilities.[1]

Also in the Executive Order, Obama stated that progress has been made in eliminating barriers to success for women, particularly during the past generation.[1] Obama recognized that attendance of women at colleges and graduate schools is at a record number.[1] He further recognized that there are many women in the workforce, including executives of corporations and owners of businesses.[1] Serving in all areas of government, including the highest levels, are women, stated Obama.[1]

That stated, Obama also recognized that there are inequalities that continue regarding women.[1] He stated that the average American woman earns "78 cents for every dollar men make."[1] He further stated that women are not significantly represented in career fields that include science, technology, engineering, and math (STEM).[1] Obama's Executive Order additionally stated that "too many women lack health insurance,[1]...[and that] "violence against women and girls remains a global epidemic."[1] Guaranteeing equal opportunities in education for girls and women continues to be challenging;[1] and women have experienced serious affects of America's economic crisis that began in 2007.[1]

Obama further stated that these issues that affect women are not solely the concerns of women.[1]

Regarding the affect of the issues on women and others, Obama further stated in his Executive Order 13506:

When jobs do not offer family leave, that affects men who wish to help care for their families. When women earn less than men for the same work, that affects families who have to work harder to make ends meet. When our daughters do not have the same educational and career opportunities as our sons, that affects entire communities, our economy, and our future as a Nation.[1]

All of these reasons and more are those for establishing the Council.[1]

The Council on Women and Girls works with Federal "executive departments and agencies to provide a coordinated Federal response to issues that have an impact on the lives of women and girls,"[1][2][3][4] including providing assistance to women-owned businesses, and working "to increase the participation of women in the science, engineering, and technology workforce, and to ensure that Federal programs and policies adequately take those impacts into account."[1]

The Council is "responsible for providing recommendations to the President on the effects of pending legislation and executive branch policy proposals; for suggesting changes to Federal programs or policies to address issues of special importance to women and girls; for reviewing and recommending changes to policies that have a distinct impact on women in the Federal workforce; and for assisting in the development of legislative and policy proposals of special importance to women and girls."[1]

The White House Task Force to Protect Students from Sexual Assault is a development of both the White House Council on Women and Girls and the Office of the Vice President of the United States.[2][3] The Task Force was established to protect American college and university students from sexual assault, to ensure that American colleges and universities are in compliance with federal regulations regarding sexual assault on campuses, and to help provide for a safer environment for students on campuses of higher learning in the United States.[2][3]

The following list reflects current Council leaders, members, and attendees as of May 2014.

The executive order allows for a member of the Council to designate a senior-level official who is a part of the member's department, agency, or office, and who is a full-time officer or employee of the Federal Government, to perform the Council functions of the member.[1]

The following individuals presently serve in the role of support staff to the Council: