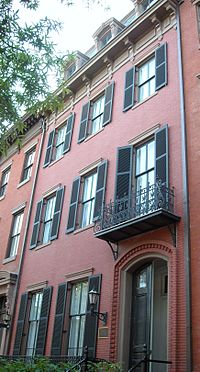 OFBCI was established by President George W. Bush through an executive order[2] on January 29, 2001, representing one of the key domestic policies of Bush's campaign promise of "compassionate conservatism." The initiative sought to strengthen faith-based and community organizations and expand their capacity to provide federally funded social services, with the idea having been that these groups were well-situated to meet the needs of local individuals. As Texas governor, Bush had used the "Charitable Choice" provisions of the 1996 welfare reform (which allowed "faith-based" entities to compete for government contracts to deliver social services) to support the work of faith-based groups in Texas.

The office was briefly led by Don Willett, an aide from Bush's tenure as governor of Texas who was later appointed a justice on the Supreme Court of Texas. The first person named as director of the OFBCI was John DiIulio, a University of Pennsylvania political science professor. DiIulio later left the office and became a critic of the Bush administration.

Critics of the OFBCI, including Americans United for Separation of Church and State and the American Civil Liberties Union, assert that it violated the Establishment Clause by using tax money to fund religion. They also argued that faith-based initiatives were used as part of electoral strategies to yield more votes for Bush and the GOP.

For fiscal year 2005, more than $2.2 billion in competitive social service grants were awarded to faith-based organizations. Between fiscal years 2003 and 2005, the total dollar amount of all grants awarded to FBOs increased by 21 percent (GAO 2006:43[3]). The majority of these grants were distributed through state agencies to local organizations in the form of formula grants (GAO 2006:17[3]).

Faith-based organizations are eligible to participate in federally administered social service programs to the same degree as any other group, although certain restrictions on FBOs that accept government funding have been created by the White House to avoid violations of the Establishment Clause.

President Barack Obama greets and thanks members of the President's Council on Faith-Based and Neighborhood Partnerships during a drop by in the Roosevelt Room of the White House, March 9, 2010.

President Barack Obama renamed the office [4] and appointed Joshua DuBois as its head. He also established an advisory council for the office. The Advisory Council is composed of religious and secular leaders and scholars from different backgrounds. Each member of the Council is appointed to a one-year term. The members of the Council [5] include:

According to ABC News, the office would seek "to expand the role of this office as it relates to policy issues where religious and local leaders can be effective. DuBois will coordinate with faith-based and community organizations on social service outreach and will work to utilize these organizations' efforts to advance the administration's policies, with a primary focus on poverty."[6]