From Infogalactic: the planetary knowledge core
Jump to: navigation, search
Not to be confused with Situation Room, the photo named after the room.

The White House Situation Room is a 5,525-square-foot (513.3 m2)[1] conference room and intelligence management center in the basement of the West Wing of the White House. It is run by the National Security Council staff for the use of the President of the United States and his advisors (including the National Security Advisor, the Homeland Security Advisor and the White House Chief of Staff) to monitor and deal with crises at home and abroad and to conduct secure communications with outside (often overseas) persons. The Situation Room is equipped with secure, advanced communications equipment for the President to maintain command and control of U.S. forces around the world. 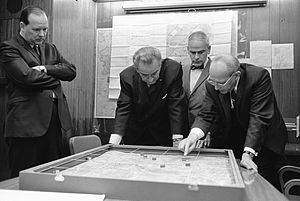 The Situation Room was created in 1961[2] by President John F. Kennedy after the failure of the Bay of Pigs invasion was attributed to a lack of real-time information. The room has secure communications systems built into it and the walls contain wood panels that hide different audio, video and other systems.

The Situation Room staff is organized around five Watch Teams that monitor domestic and international events. Each Watch Team includes three Duty Officers, a communications assistant, and an intelligence analyst; though the number and composition of the teams may vary, depending on shift requirements and workload. The teams are staffed from a pool of approximately 30 senior personnel from various agencies in the intelligence community and from the military. These members are handpicked from heavily vetted nominations made by their parent agencies, and are strictly apolitical. They stand watch on a 24-hour basis, constantly monitoring world events and keeping senior White House staff apprised of significant incidents.[2][3] 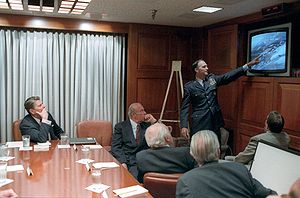 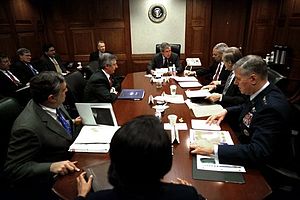 President George W. Bush meeting with his war council in the Situation Room on March 21, 2003 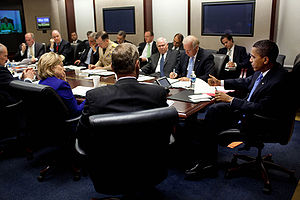 President Barack Obama holding a strategy review on Afghanistan in the Situation Room on September 30, 2009

The mission of the Situation Room is to provide current intelligence and crisis support to the NSC staff, the National Security Advisor, and the President. In effect, the Situation Room is a 24/7 one-stop shop for sensitive information flowing into and out of the White House. It is also the funnel through which most communications, especially classified information, will pass when the President is not in residence. It is an essential link, providing the traveling White House with access to all the information available from Washington's national security community.

In addition, the Watch Teams produce morning and evening summaries of highly selective material. These summaries, targeted on current interagency issues, are transmitted electronically to the NSC staff.

The Situation Room staff also provides alerts on breaking events to NSC and White House personnel. Responsibility for informing the President belongs to the National Security Adviser. Later, a written "Sit Room Note" will be prepared, summarizing the event with up-to-the-minute reports from other centers, perhaps including a photo, diagram, or map. The task of the Situation Room staff is to ensure that the President and National Security Adviser are informed not only of the current situation but also how the situation is being portrayed by the media.

Another typical Situation Room activity is arranging the President's phone calls and other sensitive communications with foreign heads of state. This includes coordinating the timing of such calls at each end, providing interpreters where necessary, and ensuring appropriate security and record keeping. In this function, the Situation Room coordinates closely with the White House Communications Agency.[3] 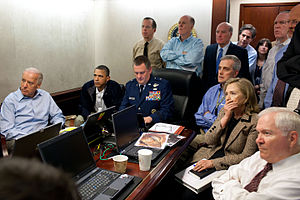 Situation Room: U.S. President Barack Obama and Vice President Joe Biden, along with members of the national security team, receive an update on Operation Neptune Spear, a mission against Osama bin Laden, in one of the conference rooms of the Situation Room of the White House, May 1, 2011 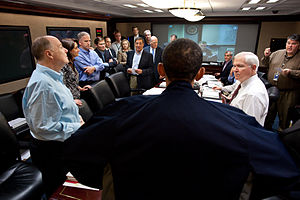 President Barack Obama talks with members of the national security team at the conclusion of one in a series of meetings discussing the mission against Osama bin Laden, May 1, 2011. Gen. James Cartwright, Vice Chairman of the Joint Chiefs of Staff, is seen on the screen
Video of the situation room facilities after the renovations

The only comprehensive renovation of the Situation Room took place from 2006 to 2007.[4] Prior to the renovation, the room used cathode ray tubes for monitors and fax for communication and had computers and telephones with 1985-era technology.[4] The room also had a small kitchen with no sink.[4] Encrypted audio/visual equipment was also unreliable, and such equipment would sometimes go black, "prompting a presidential outburst."[4] Henry Kissinger once described the Situation Room as "uncomfortable, unaesthetic and essentially oppressive,"[5] while The New York Times termed the pre-renovation complex "something of a low-tech dungeon."[4]

Planning for the renovation began before the September 11, 2001 attacks, although the project became more urgent afterward.[4]

Renovations began in August 2006, when the Situation Room complex was gutted down to bricks and bare floor[5] and rebuilt from the ground up. The complex was renovated over about four and a half months[4] and was disruptive, particularly to White House Chief of Staff Joshua Bolten, whose office was directly above the Situation Room. The New York Times reported that "Staff members described sitting in his room and hearing ear-piercing noise or watching water ripple in glasses on his desk as the floor shook."[4] The renovation yielded several pieces from decades before, including coaxial cables, columns and a frame window from a Franklin D. Roosevelt-era sunken courtyard that was later built over.[4]

The renovations also included an expansion of the Situation Room's use from only the National Security Council to include the Homeland Security Council and office of the White House Chief of Staff.[4] Some of the mahogany was removed to reduce noise, and three secure video rooms were added in addition to the two already in place. A secure direct feed to Air Force One was added.[4] Additionally, the room was revamped to make future technological upgrades easier—"so you don't have to carve a hole in an antique mahogany wall to improve it," according to Deputy White House Chief of Staff Joe Hagin.[4]

Sensors were installed in the ceilings to detect cellular signals to prevent unauthorized communications and bugging by mobile phones, personal digital assistants, and other devices.[4] Before the renovation, the Secret Service confiscated phones but had no other means of preventing smuggled communication devices.[4] The new complex includes a lead-lined cabinet near the reception area for the deposit of personal communication devices upon entry.[5] Close by are glass-encased booths (which the Associated Press described as "retro-looking") for secure and private telephone calls.[5]

The seating of the room was also changed to add "two tiers of curved computer terminals that can be fed both classified and unclassified data from around the country and the world"[4] for watch officers (who before the renovation were "seated so they stared at walls rather than each other").[4]

The renovation was formally completed by mid-May 2007. On May 17, 2007, President George W. Bush and British Prime Minister Tony Blair participated in a video conference with members of their Iraq teams from the newly renovated Situation Room.[6] The following day, President Bush officially opened the newly refurbished Situation Room in a ribbon-cutting ceremony.[7]