The White House Task Force to Protect Students from Sexual Assault was formed on January 22, 2014, after President Barack Obama directed the Office of the Vice President of the United States and the White House Council on Women and Girls to "strengthen and address compliance issues and provide institutions with additional tools to respond to and address rape and sexual assault."[1][2][3] The Task Force is part of a wider federal move to bring awareness to sexual violence on American campuses, which also included the Office for Civil Rights release of a list of American higher education institutions with open Title IX sexual violence investigations and the It's On Us public awareness campaign. The co-chairs of the Task Force are Vice President Joe Biden and Senior Advisor to the President Valerie Jarrett.[1][not in citation given] 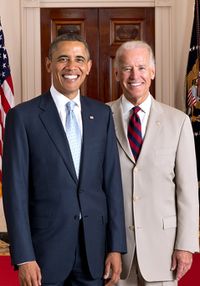 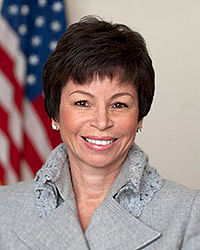 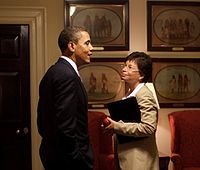 Obama speaks with Jarrett in a West Wing corridor.

While formed through an official government memorandum on January 22, 2014, the White House Task Force to Protect Students from Sexual Assault exists as part of a lineage of government interventions against sexual violence, notably the White House Council on Women and Girls formed in 2009 and the Violence Against Women Act first drafted by Biden when he was a senator in 1994.[4] Simultaneously, activists within The New Campus Anti-Rape Movement have pushed for legislative changes in the ways the U.S. government enforces regulations, as demonstrated in the collaborations between nationally recognized activists and U.S. senators.[5]

Data published in a 2014 government report on sexual assault in American colleges and universities reflects the numbers and backgrounds of college students who have experienced sexual assault.

In the January 2014 report, "Rape and Sexual Assault: A Renewed Call to Action," an overview of findings about sexual assault of college and university students was provided, as follows:

1) Women and girls are the vast majority of victims: nearly 1 in 5 women – or nearly 22 million – have been raped in their lifetimes.[6]
2) Men and boys, however, are also at risk: 1 in 71 men – or almost 1.6 million – have been raped during their lives.
3) Women of all races are targeted, but some are more vulnerable than others: 33.5% of multiracial women have been raped, as have 27% of American Indian and Alaska Native women, compared to 15% of Hispanic, 22% of Black, and 19% of White women.
4) Most victims know their assailants.
5) The vast majority (nearly 98%) of perpetrators are male.
6) Young people are especially at risk: nearly half of female survivors were raped before they were 18, and over one-quarter of male survivors were raped before they were 10. College students may be particularly vulnerable — one study found that 1 in 5 undergraduate women has been sexually assaulted while in college. [7]
7) Undergraduate women are at greatest risk of being sexually assaulted during the freshman and sophomore years.[8]
8) Repeat victimization is common: over a third of women who were raped as minors were also raped as adults.
9) Other populations are also at higher risk of being raped or sexually assaulted, including people with disabilities, the LGBT community, prison inmates (of both genders), and the homeless. Undocumented immigrants face unique challenges, because their abusers often threaten to have them deported if they try to get help.[4]

The Task Force was created to protect students from sexual assault, to help improve the safety of American college and university campuses, and to help American colleges and universities to "meet their obligations" and be in compliance with federal regulations in this area.[1][2][3]

Specifically, a listing of the mission and functions of the Task Force are as follows, as quoted directly from Obama's January 22, 2014 Memorandum:

The Action Plan of the Task Force, also as provided for in Obama's January 22, 2014 Memorandum, includes the following:

(a) Within 90 days of the date of this memorandum, the Task Force shall develop and submit proposals and recommendations to the President for:
(i) providing examples of instructions, policies, and protocols for institutions, including: rape and sexual assault policies; prevention programs; crisis intervention and advocacy services; complaint and grievance procedures; investigation protocols; adjudicatory procedures; disciplinary sanctions; and training and orientation modules for students, staff, and faculty;
(ii) measuring the success of prevention and response efforts at institutions, whether through compliance with individual policies or through broader assessments of campus climate, attitudes and safety, and providing the public with this information;
(iii) maximizing the Federal Government's effectiveness in combatting campus rape and sexual assault by, among other measures, making its enforcement activities transparent and accessible to students and prospective students nationwide; and
(iv) promoting greater coordination and consistency among the agencies and offices that enforce the Federal laws addressing campus rape and sexual assault and support improved campus responses to sexual violence.
(b) Within 1 year of the date of this memorandum, and then on an annual basis, the Task Force shall provide a report to the President on implementation efforts with respect to this memorandum.[1]