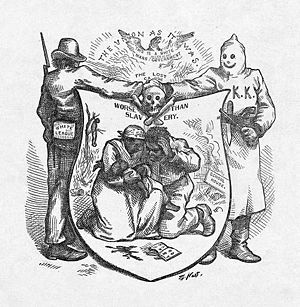 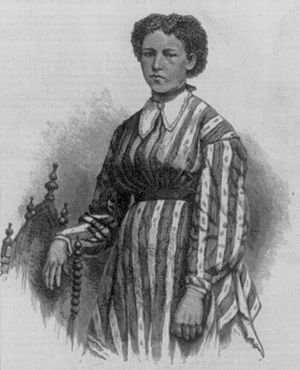 Julia Hayden, a 17-year-old Louisianan schoolteacher who was murdered by the White League in 1874.[1]

The White League, also known as the White Man's League,[1] was an American white supremacist paramilitary terrorist organization started in 1874 to turn Republicans out of office and intimidate freedmen from voting and political organizing. Affiliated with the Democratic Party, its first chapter was formed in Grant Parish, Louisiana and neighboring parishes, made up of many of the Confederate veterans who had participated in the Colfax massacre in April 1873. Chapters were soon founded in New Orleans and other areas of the state. Active during the later years of Reconstruction, it was one of the paramilitary groups described as "the military arm of the Democratic Party."[2] Through violence and intimidation, its members suppressed Republican voting and contributed to the Democrats' taking control of the Louisiana Legislature in 1876.[2]

After white Democrats regained control of the state legislature in 1876, members of the White Leagues were absorbed into the state militias and the National Guard.[3]

Although sometimes linked to the secret vigilante groups, the Ku Klux Klan and Knights of the White Camelia, the White League and other paramilitary groups of the later 1870s marked a significant change.[4] They operated openly in communities, solicited coverage from newspapers, and the men's identities were generally known. Similar paramilitary groups were chapters of the Red Shirts, started in Mississippi in 1875 and active also in North and South Carolina. They had explicit political goals to overthrow the Reconstruction government. They directed their activities toward intimidation and removal of Northern and black Republican candidates and officeholders. Made up of well-armed Confederate veterans, they worked to turn Republicans out of office, disrupt their political organizing, and use force to intimidate and terrorize freedmen to keep them from the polls. Backers helped finance purchases of up-to-date arms: Winchester rifles, Colt revolvers and Prussian needle guns.[4]

Some sources charge the White League with culpability for the Colfax Massacre of 1873, but the organization was not established under that name until March 1874. Christopher Columbus Nash, a Confederate veteran, former prisoner of war at Johnson's Island in Ohio, and the former sheriff of Grant Parish, led companies of white militias at Colfax to turn out Republican officeholders and blacks defending the courthouse; his forces killed up to 150 blacks in the Colfax Massacre, an event in which three white men were killed, one possibly by friendly fire.

The first unit of the White League, founded in 1874, was composed of members of Nash's force, mostly Confederate veterans who had participated in the Colfax Massacre.[5] It expressed its purpose to defend a "hereditary civilization and Christianity menaced by a stupid Africanization."[6]

In 1874, White League members murdered Julia Hayden, a 17-year-old black woman from Tennessee who was working as a schoolteacher in Hartsville, Louisiana.[1]

In his December 1874 State of the Union address, U.S. President Ulysses S. Grant expressed disdain over the White League's activities, condemning them for their violence and for violating the civil rights of freedmen:

I regret to say that with preparations for the late election decided indications appeared in some localities in the Southern States of a determination, by acts of violence and intimidation, to deprive citizens of the freedom of the ballot because of their political opinions. Bands of men, masked and armed, made their appearance; White Leagues and other societies were formed; large quantities of arms and ammunition were imported and distributed to these organizations; military drills, with menacing demonstrations, were held, and with all these murders enough were committed to spread terror among those whose political action was to be suppressed, if possible, by these intolerant and criminal proceedings.

The Coushatta Massacre occurred in another Red River parish: the local White League forced six Republican officeholders to resign and promise to leave the state. The League assassinated the men before they left the parish, together with between five and twenty freedmen (sources differ) who were witnesses. Generally in remote areas, the White League's show of force and outright murders always overcame opposition. They were Confederate veterans, experienced and well armed.[8]

Later in 1874, the Metropolitan Police of New Orleans, established as a state militia by the Republican governor, attempted to intercept a shipment of arms to the League. The League had entered the city to try to take over state government, in the aftermath of the dispute 1872 gubernatorial election. In the subsequent Battle of Liberty Place on September 14, 1874, 5,000 members of the White League routed 3,500 police and state militia to turn out the Republican governor. They demanded the resignation of Governor William Pitt Kellogg in favor of John McEnery, the Democratic candidate. Kellogg refused and the White League briefly fought a battle resulting in 100 casualties. They took over and controlled the State House, City Hall and arsenal for three days, withdrawing just ahead of Federal troops and ships' arriving to reinforce the government. Kellogg had requested aid from U.S. President Ulysses S. Grant; once the troops arrived, he was restored to office.[9]

President Grant sent additional troops within a month in another effort to try to pacify the Red River valley in northern Louisiana. It had been plagued by violence, including the massacres at Colfax in 1873 and Coushatta in 1874.[10] The White League was effective; voting by Republicans decreased and Democrats regained control of the state legislature in 1876.